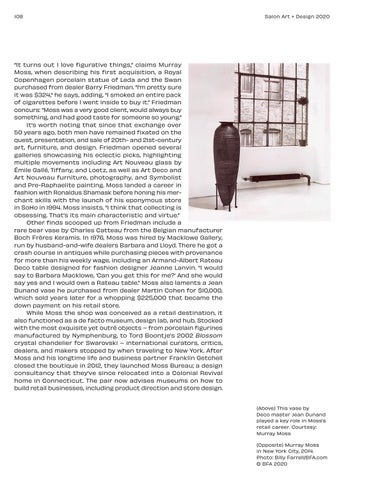 “It turns out I love figurative things,” claims Murray Moss, when describing his first acquisition, a Royal Copenhagen porcelain statue of Leda and the Swan purchased from dealer Barry Friedman. “I’m pretty sure it was $324,” he says, adding, “I smoked an entire pack of cigarettes before I went inside to buy it.” Friedman concurs: “Moss was a very good client, would always buy something, and had good taste for someone so young.” It’s worth noting that since that exchange over 50 years ago, both men have remained fixated on the quest, presentation, and sale of 20th- and 21st-century art, furniture, and design. Friedman opened several galleries showcasing his eclectic picks, highlighting multiple movements including Art Nouveau glass by Émile Gallé, Tiffany, and Loetz, as well as Art Deco and Art Nouveau furniture, photography, and Symbolist and Pre-Raphaelite painting. Moss landed a career in fashion with Ronaldus Shamask before honing his merchant skills with the launch of his eponymous store in SoHo in 1994. Moss insists, “I think that collecting is obsessing. That’s its main characteristic and virtue.” Other finds scooped up from Friedman include a rare bear vase by Charles Catteau from the Belgian manufacturer Boch Frères Keramis. In 1976, Moss was hired by Macklowe Gallery, run by husband-and-wife dealers Barbara and Lloyd. There he got a crash course in antiques while purchasing pieces with provenance for more than his weekly wage, including an Armand-Albert Rateau Deco table designed for fashion designer Jeanne Lanvin. “I would say to Barbara Macklowe, ‘Can you get this for me?’ And she would say yes and I would own a Rateau table.” Moss also laments a Jean Dunand vase he purchased from dealer Martin Cohen for $10,000, which sold years later for a whopping $225,000 that became the down payment on his retail store. While Moss the shop was conceived as a retail destination, it also functioned as a de facto museum, design lab, and hub. Stocked with the most exquisite yet outré objects – from porcelain figurines manufactured by Nymphenburg, to Tord Boontje’s 2002 Blossom crystal chandelier for Swarovski – international curators, critics, dealers, and makers stopped by when traveling to New York. After Moss and his longtime life and business partner Franklin Getchell closed the boutique in 2012, they launched Moss Bureau; a design consultancy that they’ve since relocated into a Colonial Revival home in Connecticut. The pair now advises museums on how to build retail businesses, including product direction and store design. 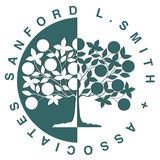