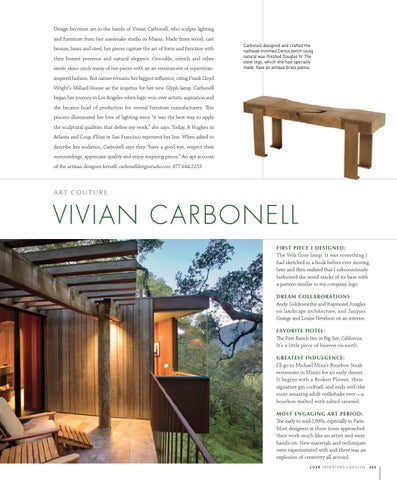 Design becomes art in the hands of Vivian Carbonell, who sculpts lighting and furniture from her namesake studio in Miami. Made from wood, cast bronze, brass and steel, her pieces capture the art of form and function with their honest presence and natural elegance. Crocodile, ostrich and other exotic skins cinch many of her pieces with an air reminiscent of equestrian-

Carbonell designed and crafted the nailhead-trimmed Certus bench using natural wax-finished Douglas fir. The steel legs, which she had specially made, have an antique brass patina.

inspired fashion. But nature remains her biggest influence, citing Frank Lloyd Wright’s Millard House as the impetus for her new Glyph lamp. Carbonell began her journey in Los Angeles when logic won over artistic aspiration and she became head of production for several furniture manufacturers. This process illuminated her love of lighting since “it was the best way to apply the sculptural qualities that define my work,” she says. Today, R Hughes in Atlanta and Coup d’Etat in San Francisco represent her line. When asked to describe her audience, Carbonell says they “have a good eye, respect their surroundings, appreciate quality and enjoy inspiring pieces.” An apt account of the artisan designer herself. carbonelldesignstudio.com; 877.644.5153

The Vela floor lamp. It was something I had sketched in a book before ever moving here and then realized that I subconsciously fashioned the wood stacks of its base with a pattern similar to my company logo. DREAM COLLABORATIONS : Andy Goldsworthy and Raymond Jungles on landscape architecture, and Jacques Grange and Louise Nevelson on an interior. FAVORITE HOTEL:

I’ll go to Michael Mina’s Bourbon Steak restaurant in Miami for an early dinner. It begins with a Broken Flower, their signature gin cocktail, and ends with the most amazing adult milkshake ever—a bourbon malted with salted caramel. MOST ENGAGING ART PERIOD:

The early to mid-1900s, especially in Paris. Most designers in those times approached their work much like an artist and were hands-on. New materials and techniques were experimented with and there was an explosion of creativity all around. LUXE INTERIORS 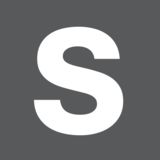