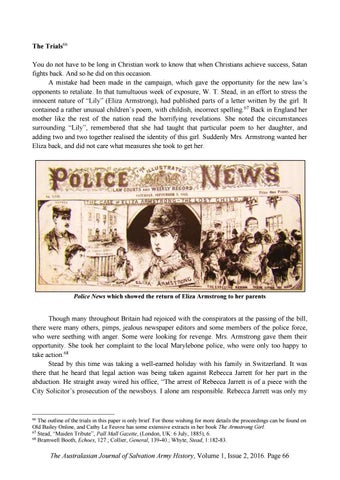 The Trials66 You do not have to be long in Christian work to know that when Christians achieve success, Satan fights back. And so he did on this occasion. A mistake had been made in the campaign, which gave the opportunity for the new law’s opponents to retaliate. In that tumultuous week of exposure, W. T. Stead, in an effort to stress the innocent nature of “Lily” (Eliza Armstrong), had published parts of a letter written by the girl. It contained a rather unusual children’s poem, with childish, incorrect spelling. 67 Back in England her mother like the rest of the nation read the horrifying revelations. She noted the circumstances surrounding “Lily”, remembered that she had taught that particular poem to her daughter, and adding two and two together realised the identity of this girl. Suddenly Mrs. Armstrong wanted her Eliza back, and did not care what measures she took to get her.

Though many throughout Britain had rejoiced with the conspirators at the passing of the bill, there were many others, pimps, jealous newspaper editors and some members of the police force, who were seething with anger. Some were looking for revenge. Mrs. Armstrong gave them their opportunity. She took her complaint to the local Marylebone police, who were only too happy to take action.68 Stead by this time was taking a well-earned holiday with his family in Switzerland. It was there that he heard that legal action was being taken against Rebecca Jarrett for her part in the abduction. He straight away wired his office, “The arrest of Rebecca Jarrett is of a piece with the City Solicitor’s prosecution of the newsboys. I alone am responsible. Rebecca Jarrett was only my