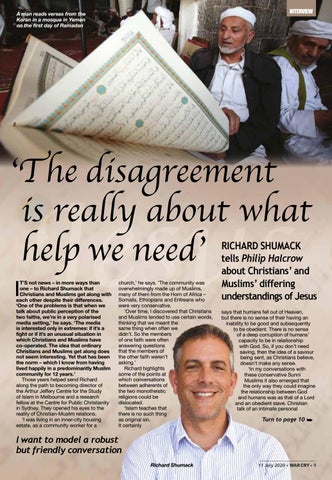 ‘The disagreement is really about what help we need’ I

T’S not news – in more ways than one – to Richard Shumack that Christians and Muslims get along with each other despite their differences. ‘One of the problems is that when we talk about public perception of the two faiths, we’re in a very polarised media setting,’ he says. ‘The media is interested only in extremes: if it’s a fight or if it’s an unusual situation in which Christians and Muslims have co-operated. The idea that ordinary Christians and Muslims get along does not seem interesting. Yet that has been the norm – which I know from having lived happily in a predominantly Muslim community for 12 years.’ Those years helped send Richard along the path to becoming director of the Arthur Jeffery Centre for the Study of Islam in Melbourne and a research fellow at the Centre for Public Christianity in Sydney. They opened his eyes to the reality of Christian-Muslim relations. ‘I was living in an inner-city housing estate, as a community worker for a

church,’ he says. ‘The community was overwhelmingly made up of Muslims, many of them from the Horn of Africa – Somalis, Ethiopians and Eritreans who were very conservative. ‘Over time, I discovered that Christians and Muslims tended to use certain words, thinking that we meant the same thing when often we didn’t. So the members of one faith were often answering questions that the members of the other faith weren’t asking.’ Richard highlights some of the points at which conversations between adherents of the two monotheistic religions could be dislocated. ‘Islam teaches that there is no such thing as original sin. It certainly

RICHARD SHUMACK tells Philip Halcrow about Christians’ and Muslims’ differing understandings of Jesus says that humans fell out of Heaven, but there is no sense of their having an inability to be good and subsequently to be obedient. There is no sense of a deep corruption of humans’ capacity to be in relationship with God. So, if you don’t need saving, then the idea of a saviour being sent, as Christians believe, doesn’t make any sense. ‘In my conversations with these conservative Sunni Muslims it also emerged that the only way they could imagine the relationship between God and humans was as that of a Lord and an obedient slave. Christian talk of an intimate personal

I want to model a robust but friendly conversation Richard Shumack 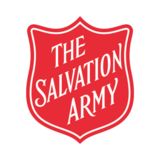 The Salvation Army UK and Ireland