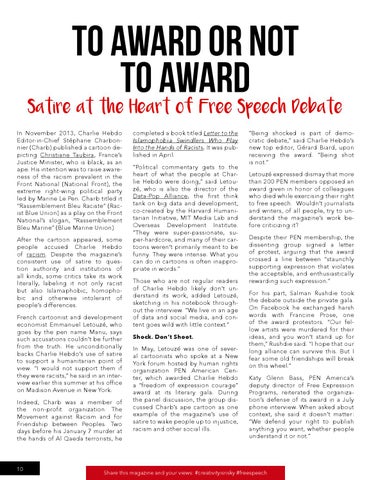 TO AWARD OR NOT TO AWARd

Satire at the Heart of Free Speech Debate In November 2013, Charlie Hebdo Editor-in-Chief Stéphane Charbonnier (Charb) published a cartoon depicting Christiane Taubira, France’s Justice Minister, who is black, as an ape. His intention was to raise awareness of the racism prevalent in the Front National (National Front), the extreme right-wing political party led by Marine Le Pen. Charb titled it “Rassemblement Bleu Raciste” (Racist Blue Union) as a play on the Front National’s slogan, “Rassemblement Bleu Marine” (Blue Marine Union). After the cartoon appeared, some people accused Charlie Hebdo of racism. Despite the magazine’s consistent use of satire to question authority and institutions of all kinds, some critics take its work literally, labeling it not only racist but also Islamaphobic, homophobic and otherwise intolerant of people’s differences. French cartoonist and development economist Emmanuel Letouzé, who goes by the pen name Manu, says such accusations couldn’t be further from the truth. He unconditionally backs Charlie Hebdo’s use of satire to support a humanitarian point of view. “I would not support them if they were racists,” he said in an interview earlier this summer at his office on Madison Avenue in New York. Indeed, Charb was a member of the non-profit organization The Movement against Racism and for Friendship between Peoples. Two days before his January 7 murder at the hands of Al Qaeda terrorists, he

completed a book titled Letter to the Islamophobia Swindlers Who Play Into the Hands of Racists. It was published in April. “Political commentary gets to the heart of what the people at Charlie Hebdo were doing,” said Letouzé, who is also the director of the Data-Pop Alliance, the first think tank on big data and development, co-created by the Harvard Humanitarian Initiative, MIT Media Lab and Overseas Development Institute. “They were super-passionate, super-hardcore, and many of their cartoons weren’t primarily meant to be funny. They were intense. What you can do in cartoons is often inappropriate in words.” Those who are not regular readers of Charlie Hebdo likely don’t understand its work, added Letouzé, sketching in his notebook throughout the interview. “We live in an age of data and social media, and content goes wild with little context.” Shock. Don’t Shoot. In May, Letouzé was one of several cartoonists who spoke at a New York forum hosted by human rights organization PEN American Center, which awarded Charlie Hebdo a “freedom of expression courage” award at its literary gala. During the panel discussion, the group discussed Charb’s ape cartoon as one example of the magazine’s use of satire to wake people up to injustice, racism and other social ills.

“Being shocked is part of democratic debate,” said Charlie Hebdo’s new top editor, Gérard Biard, upon receiving the award. “Being shot is not.” Letouzé expressed dismay that more than 200 PEN members opposed an award given in honor of colleagues who died while exercising their right to free speech. Wouldn’t journalists and writers, of all people, try to understand the magazine’s work before criticizing it? Despite their PEN membership, the dissenting group signed a letter of protest, arguing that the award crossed a line between “staunchly supporting expression that violates the acceptable, and enthusiastically rewarding such expression.” For his part, Salman Rushdie took the debate outside the private gala. On Facebook he exchanged harsh words with Francine Prose, one of the award protestors. “Our fellow artists were murdered for their ideas, and you won’t stand up for them,” Rushdie said. “I hope that our long alliance can survive this. But I fear some old friendships will break on this wheel.” Katy Glenn Bass, PEN America’s deputy director of Free Expression Programs, reiterated the organization’s defense of its award in a July phone interview. When asked about context, she said it doesn’t matter: “We defend your right to publish anything you want, whether people understand it or not.” 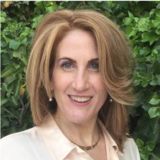