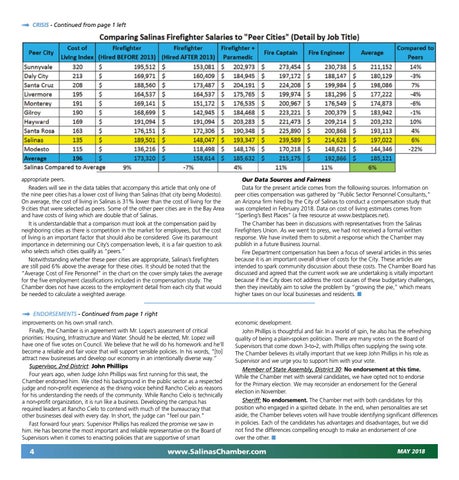 appropriate peers. Readers will see in the data tables that accompany this article that only one of the nine peer cities has a lower cost of living than Salinas (that city being Modesto). On average, the cost of living in Salinas is 31% lower than the cost of living for the 9 cities that were selected as peers. Some of the other peer cities are in the Bay Area and have costs of living which are double that of Salinas. It is understandable that a comparison must look at the compensation paid by neighboring cities as there is competition in the market for employees, but the cost of living is an important factor that should also be considered. Give its paramount importance in determining our City’s compensation levels, it is a fair question to ask who selects which cities qualify as “peers.” Notwithstanding whether these peer cities are appropriate, Salinas’s firefighters are still paid 6% above the average for these cities. It should be noted that the “Average Cost of Fire Personnel” in the chart on the cover simply takes the average for the five employment classifications included in the compensation study. The Chamber does not have access to the employment detail from each city that would be needed to calculate a weighted average.

improvements on his own small ranch. Finally, the Chamber is in agreement with Mr. Lopez’s assessment of critical priorities: Housing, Infrastructure and Water. Should he be elected, Mr. Lopez will have one of five votes on Council. We believe that he will do his homework and he’ll become a reliable and fair voice that will support sensible policies. In his words, “[to] attract new businesses and develop our economy in an intentionally diverse way.” Supervisor, 2nd District: John Phillips Four years ago, when Judge John Phillips was first running for this seat, the Chamber endorsed him. We cited his background in the public sector as a respected judge and non-profit experience as the driving voice behind Rancho Cielo as reasons for his understanding the needs of the community. While Rancho Cielo is technically a non-profit organization, it is run like a business. Developing the campus has required leaders at Rancho Cielo to contend with much of the bureaucracy that other businesses deal with every day. In short, the judge can “feel our pain.” Fast forward four years: Supervisor Phillips has realized the promise we saw in him. He has become the most important and reliable representative on the Board of Supervisors when it comes to enacting policies that are supportive of smart

Our Data Sources and Fairness Data for the present article comes from the following sources. Information on peer cities compensation was gathered by “Public Sector Personnel Consultants,” an Arizona firm hired by the City of Salinas to conduct a compensation study that was completed in February 2018. Data on cost of living estimates comes from “Sperling’s Best Places” (a free resource at www.bestplaces.net). The Chamber has been in discussions with representatives from the Salinas Firefighters Union. As we went to press, we had not received a formal written response. We have invited them to submit a response which the Chamber may publish in a future Business Journal. Fire Department compensation has been a focus of several articles in this series because it is an important overall driver of costs for the City. These articles are intended to spark community discussion about these costs. The Chamber Board has discussed and agreed that the current work we are undertaking is vitally important because if the City does not address the root causes of these budgetary challenges, then they inevitably aim to solve the problem by “growing the pie,” which means higher taxes on our local businesses and residents. ■

economic development. John Phillips is thoughtful and fair. In a world of spin, he also has the refreshing quality of being a plain-spoken politician. There are many votes on the Board of Supervisors that come down 3-to-2, with Phillips often supplying the swing vote. The Chamber believes its vitally important that we keep John Phillips in his role as Supervisor and we urge you to support him with your vote. Member of State Assembly, District 30: No endorsement at this time. While the Chamber met with several candidates, we have opted not to endorse for the Primary election. We may reconsider an endorsement for the General election in November. Sheriff: No endorsement. The Chamber met with both candidates for this position who engaged in a spirited debate. In the end, when personalities are set aside, the Chamber believes voters will have trouble identifying significant differences in policies. Each of the candidates has advantages and disadvantages, but we did not find the differences compelling enough to make an endorsement of one over the other. ■