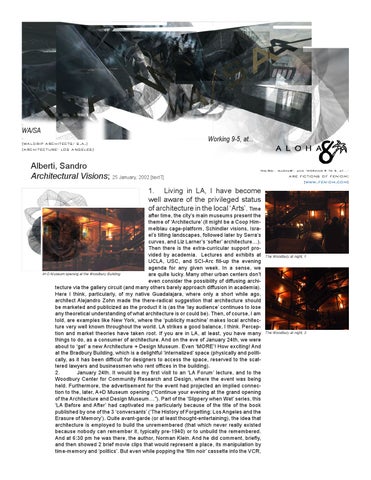 1. Living in LA, I have become well aware of the privileged status of architecture in the local ‘Arts’. Time

after time, the city’s main museums present the theme of ‘Architecture’ (it might be a Coop Himmelblau cage-platform, Schindler visions, Israel’s tilting landscapes, followed later by Serra’s curves, and Liz Larner’s ‘softer’ architecture…). Then there is the extra-curricular support provided by academia. Lectures and exhibits at UCLA, USC, and SCI-Arc fill-up the evening agenda for any given week. In a sense, we A+D Museum opening at the Woodbury Building. are quite lucky. Many other urban centers don’t even consider the possibility of diffusing architecture via the gallery circuit (and many others barely approach diffusion in academia). Here I think, particularly, of my native Guadalajara, where only a short while ago, architect Alejandro Zohn made the there-radical suggestion that architecture should be marketed and publicized as the product it is (as the ‘lay audience’ continues to lose any theoretical understanding of what architecture is or could be). Then, of course, I am told, are examples like New York, where the ‘publicity machine’ makes local architecture very well known throughout the world. LA strikes a good balance, I think. Perception and market theories have taken root. If you are in LA, at least, you have many things to do, as a consumer of architecture. And on the eve of January 24th, we were about to ‘get’ a new Architecture + Design Museum. Even ‘MORE’! How exciting! And at the Bradbury Building, which is a delightful ‘internalized’ space (physically and politically, as it has been difficult for designers to access the space, reserved to the scattered lawyers and businessmen who rent offices in the building). 2. January 24th. It would be my first visit to an ‘LA Forum’ lecture, and to the Woodbury Center for Community Research and Design, where the event was being held. Furthermore, the advertisement for the event had projected an implied connection to the, later, A+D Museum opening (“Continue your evening at the grand opening of the Architecture and Design Museum…”). Part of the ‘Slippery when Wet’ series, this ‘LA Before and After’ had captivated me particularly because of the title of the book published by one of the 3 ‘conversants’ (‘The History of Forgetting: Los Angeles and the Erasure of Memory’). Quite avant-garde (or at least thought-entertaining), the idea that architecture is employed to build the unremembered (that which never really existed because nobody can remember it, typically pre-1940) or to unbuild the remembered. And at 6:30 pm he was there, the author, Norman Klein. And he did comment, briefly, and then showed 2 brief movie clips that would represent a place, its manipulation by time-memory and ‘politics’. But even while popping the ‘film noir’ cassette into the VCR,

The Woodbury at night, 1.

The Woodbury at night, 2.

Mr. Klein was already yielding to another lecturer, Julius Schulman, eternal photographer, almostnative of Los Angeles. The forum would turn out to be a sort of pre-humous homage to Mr. Schulman, (and, apparently, Community Research and Design really stands for ‘Urbanism’; this evening, thanks to Mr. Schulman, it became that sort of urbanism that exists to minimize the evils of misused architecture). So, at any rate, Mr. Schulman, having arrived to LA in 1920, IS one of those individuals who can remember what urbanism in LA was like before the 40s. And it doesn’t seem to have been urban at all (so one either begins to argue against any sort of development, in order to return to that idyllic moment when he used to camp out at Indian reservations, or one privileges the urban distopia that attracts so many tourists before they head off to Las Vegas and Death Valley; there is the ‘gray’ in between, of course, but I don’t feel like delving into grayness at the moment). But it was already 8:45 pm and a new conversation well underway, including audience commentary. Well, at least I had gotten some clever tidbits from the mind of Mr. Kazys Varnelis (SCI-Arc lecturer; History-TheoryHumanities), the third conversant: LA is now one of the world’s least sprawling cities, as it has reached boundaries on several sides; land use in the area is amongst the densest in the country (NY is less dense overall, if we consider its suburbs, the way we tend to do with LA); its grid is not homogeneous or boring, as it is populated with variety (plants, people, cultures). 3. Definite time-space distortion. John later mentioned to me that he had bumped into quite a few UCLA-people at the Bradbury (even Richard Weinstein was glimpsed). And they all probably loved the food and wine. By the time I arrived (9 pm), however, the crowd had become unknown, and barren serving tables served only for guests to place a few cream-less cups of coffee. One can only guess that if any of those designers at the Community Center had decided to show up, they would have found nothing, for by 9:30 pm most people had left. Throughout, however, shadows moved slowly across the dimly-lit core of the building. Vertically, over floating stairs and sliding elevator cages. And horizontally too, lucky at times to have found the small bright entrance at the back. A small nook of a gallery, the A+D, a nice space that should be reviewed in a more leisurely manner. The exhibit, ‘Shrine to Junipero Serra’… There was an exhibit?

‘Into the rabbit-hole’; the museum entrance

About the 'new' (2002) A+D museum at the back of the Bradbury Building, and the ways in which architecture is 'served' through exhibits and...

About the 'new' (2002) A+D museum at the back of the Bradbury Building, and the ways in which architecture is 'served' through exhibits and...