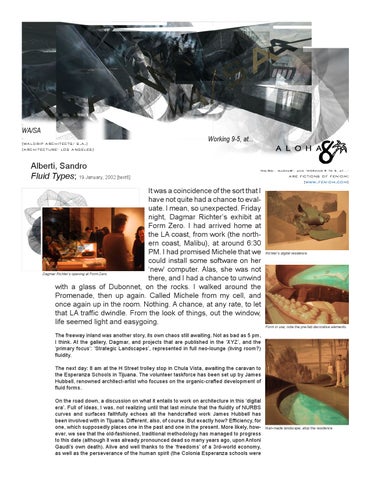 It was a coincidence of the sort that I have not quite had a chance to evaluate. I mean, so unexpected. Friday night, Dagmar Richter’s exhibit at Form Zero. I had arrived home at the LA coast, from work (the northern coast, Malibu), at around 6:30 PM. I had promised Michele that we could install some software on her ‘new’ computer. Alas, she was not Dagmar Richter’s opening at Form Zero. there, and I had a chance to unwind with a glass of Dubonnet, on the rocks. I walked around the Promenade, then up again. Called Michele from my cell, and once again up in the room. Nothing. A chance, at any rate, to let that LA traffic dwindle. From the look of things, out the window, life seemed light and easygoing.

Form in use; note the pre-fab decorative elements.

The freeway inland was another story, its own chaos still awaiting. Not as bad as 5 pm, I think. At the gallery, Dagmar, and projects that are published in the ‘XYZ’, and the ‘primary focus’: ‘Strategic Landscapes’, represented in full neo-lounge (living room?) fluidity. The next day: 8 am at the H Street trolley stop in Chula Vista, awaiting the caravan to the Esperanza Schools in Tijuana. The volunteer taskforce has been set up by James Hubbell, renowned architect-artist who focuses on the organic-crafted development of fluid forms. On the road down, a discussion on what it entails to work on architecture in this ‘digital era’. Full of ideas, I was, not realizing until that last minute that the fluidity of NURBS curves and surfaces faithfully echoes all the handcrafted work James Hubbell has been involved with in Tijuana. Different, also, of course. But exactly how? Efficiency, for one, which supposedly places one in the past and one in the present. More likely, however, we see that the old-fashioned, traditional methodology has managed to progress to this date (although it was already pronounced dead so many years ago, upon Antoni Gaudi’s own death). Alive and well thanks to the ‘freedoms’ of a 3rd-world economy, as well as the perseverance of the human spirit (the Colonia Esperanza schools were

Man-made landscape; atop the residence.

started over 10 years ago!). In the meantime, the technological present remains in the future (Greg Lynn’s production remains quite ‘light’ and we definitely know these architectures better as images than as buildings). At Form Zero, the images yearn for physicality within their chunky tactile enclosures (or are merely reinforced as visual entities within these frames). In Tijuana, the architecture continues, a curve at a time. Probably we are in a transitory period. We always seem to be, of course; the ‘grayness’ of reality. But really, here, I mean, we continue to see the potential of economically-feasible computer-produced architecture (in the last few years it at least has become merely feasible). In the border towns, however, time stretches, allowing for so many intermediate creations. I hope to be able to propose a ‘mutant’ open-air amphitheater soon; Esperanza.

PS For anyone interested in volunteering at Colonia Esperanza, people meet at the H Street trolley stop (Chula Vista/ San Diego) once a month. The next visits are scheduled: February 16th, 2002 March 16th, 2002 More info available at: http://sandiegoart.com/Jhubbell/colonia.html

Fluidity in the physical realm.

In use; perimeter cascading into ‘pluvium’.

Dagmar Richter exhibits work at the Form Zero gallery/ bookstore. A comparison of her rapid-prototyped 'fluid' architecture, and the 'fluid'...

Dagmar Richter exhibits work at the Form Zero gallery/ bookstore. A comparison of her rapid-prototyped 'fluid' architecture, and the 'fluid'...