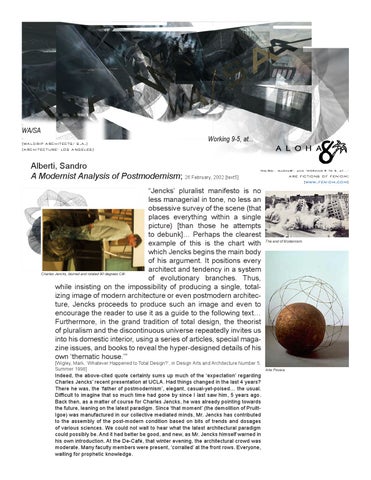 “Jencks’ pluralist manifesto is no less managerial in tone, no less an obsessive survey of the scene (that places everything within a single picture) [than those he attempts to debunk]… Perhaps the clearest example of this is the chart with which Jencks begins the main body of his argument. It positions every architect and tendency in a system Charles Jencks, blurred and rotated 90 degrees CW. of evolutionary branches. Thus, while insisting on the impossibility of producing a single, totalizing image of modern architecture or even postmodern architecture, Jencks proceeds to produce such an image and even to encourage the reader to use it as a guide to the following text… Furthermore, in the grand tradition of total design, the theorist of pluralism and the discontinuous universe repeatedly invites us into his domestic interior, using a series of articles, special magazine issues, and books to reveal the hyper-designed details of his own ‘thematic house.’” [Wigley, Mark, ‘Whatever Happened to Total Design?’, in Design Arts and Architecture Number 5, Summer 1998]

Indeed, the above-cited quote certainly sums up much of the ‘expectation’ regarding Charles Jencks’ recent presentation at UCLA. Had things changed in the last 4 years? There he was, the ‘father of postmodernism’, elegant, casual-yet-poised… the usual. Difficult to imagine that so much time had gone by since I last saw him, 5 years ago. Back then, as a matter of course for Charles Jencks, he was already pointing towards the future, leaning on the latest paradigm. Since ‘that moment’ (the demolition of PruittIgoe) was manufactured in our collective mediated minds, Mr. Jencks has contributed to the assembly of the post-modern condition based on bits of trends and dosages of various sciences. We could not wait to hear what the latest architectural paradigm could possibly be. And it had better be good, and new, as Mr. Jencks himself warned in his own introduction. At the De-Café, that winter evening, the architectural crowd was moderate. Many faculty members were present, ‘corralled’ at the front rows. Everyone, waiting for prophetic knowledge.

The end of Modernism.

Charles Jencks’ ‘Evolutionary Tree for Architecture’, as expected, seemed to be experimenting its latest revised form (everyone loves to state, as Brian Brace Taylor did recently in Architecture magazine, that “[Jencks] is continually updating the tree”; the original first appeared in the 1970s). The most novel imagery, amongst the slides, also included a funky picture of Thom Mayne with Frank Gehry at the Guggenheim Bilbao (also several images of the Guggenheim Bilbao, which Charles Jencks has visited often), and an emphasized ‘cyclic’ flow-chart describing the continuous re-iterations which the universe (and, via extrapolation-projection, everything in it, including architecture) has undergone since its ‘beginnings’. Other Jencks-charts were also new. But the paradigm, that exemplary style we had all been waiting for, where was it? Example after example, Jencks had moved ever closer to the ‘future’. The beginning of the lecture included all that his audience had already seen in the late 90s: the neo-decorative distortions Peter Eisenman’s Aronoff Center, Libeskind’s spiraling V+A Museum addition, the fractal architecture of a British community center, a visual review of the now-built Guggenheim Bilbao, references to ‘blob’ architecture. But there, the architectural references practically stopped, giving way to cosmological forecasting. That was the gist of his prediction, a continuation of cycles and feedback. Optimism for the future. Not that I would want to discredit that (for the promotion of contemporary architecture, and its analysis, have been Mr. Jencks’ ‘forte’, rather than the design of an actual ‘future architecture’). However, it might have proven more effective to evaluate the recent comeback of stark neo-Platonic Modernism, the reasons for it, and possible integration into the realm of ‘complexity’. More of a forecast, we might see, then, in MoCA’s near-future exhibits, which re-shape the now-trendy ‘clean’ and ‘pure’ modernism through confrontation with Arte Povera and the work of HC Westermann. Of course, Charles Jencks is hardly uninformed, so it seems he may have been terribly busy (there has been the publication of his latest book: ‘Le Corbusier and the Continual Revolution in Architecture’ [2000], several architectural reviews, and his Scottish garden, of course). But perhaps the ‘crux’ lies elsewhere. After all, in the near past, he already has presented fresh-new paradigms. In Architecture magazine, he reviewed Canberra’s National Museum, exposing it as a work that combines mathematics, naïveté, and consumerism in a new, more heterological type of complexity. Now he returns to UCLA, opting to omit such particular examples, and focusing, instead, on data (the diagram, rather than its symbol; information, rather than knowledge). Pedagogically, this decision on his part proves quite ‘au currant’, reflecting the current and future role of professors as advisors that help filter the tremendous amounts of media-data that continue to be produced every second. “Make your own future”, he seems to ‘be-seek’ from all those future graduates.

A Modernist Analysis of Postmodernism

A Modernist Analysis of Postmodernism