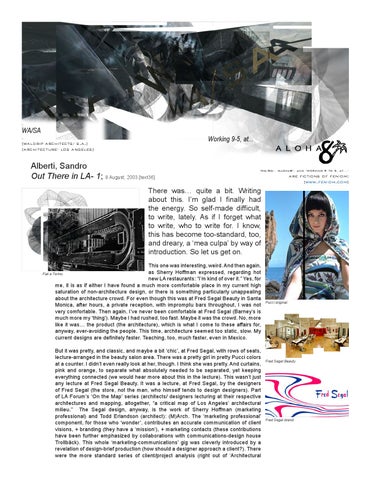 There was… quite a bit. Writing about this. I’m glad I finally had the energy. So self-made difficult, to write, lately. As if I forget what to write, who to write for. I know, this has become too-standard, too, and dreary, a ‘mea culpa’ by way of introduction. So let us get on. This one was interesting, weird. And then again, as Sherry Hoffman expressed, regarding hot new LA restaurants: “I’m kind of over it.” Yes, for me, it is as if either I have found a much more comfortable place in my current high saturation of non-architecture design, or there is something particularly unappealing about the architecture crowd. For even though this was at Fred Segal Beauty in Santa Monica, after hours, a private reception, with impromptu bars throughout, I was not very comfortable. Then again, I’ve never been comfortable at Fred Segal (Barney’s is much more my ‘thing’). Maybe I had rushed, too fast. Maybe it was the crowd. No, more like it was… the product (the architecture), which is what I come to these affairs for, anyway, ever-avoiding the people. This time, architecture seemed too static, slow. My current designs are definitely faster. Teaching, too, much faster, even in Mexico.

But it was pretty, and classic, and maybe a bit ‘chic’, at Fred Segal, with rows of seats, lecture-arranged in the beauty salon area. There was a pretty girl in pretty Pucci colors at a counter. I didn’t even really look at her, though. I think she was pretty. And curtains, pink and orange, to separate what absolutely needed to be separated, yet keeping everything connected (we would hear more about this in the lecture). This wasn’t just any lecture at Fred Segal Beauty. It was a lecture, at Fred Segal, by the designers of Fred Segal (the store, not the man, who himself tends to design designers). Part of LA Forum’s ‘On the Map’ series (architects/ designers lecturing at their respective architectures and mapping, altogether, “a critical map of Los Angeles’ architectural milieu.” The Segal design, anyway, is the work of Sherry Hoffman (marketing professional) and Todd Erlandson (architect): (M)Arch. The ‘marketing professional’ component, for those who ‘wonder’, contributes an accurate communication of client visions, + branding (they have a ‘mission’), + marketing contacts (these contributions have been further emphasized by collaborations with communications-design house Trollbäck). This whole ‘marketing-communications’ gig was cleverly introduced by a revelation of design-brief production (how should a designer approach a client?). There were the more standard series of client/project analysis (right out of ‘Architectural

Research Methods’: mission-goal-requirement-concept). Particularly noteworthy, however, was the use of concept books that are one step removed from cutting out magazine clippings/ pictures. Something to test client likes and fears, but formatted as an effective research tool. Professor Horst Rittel, back at Berkeley, had once mentioned formal questionnaires to gauge client positions, and these books leverage the best of the ‘questionnaire’ and ‘inspiration-clipping’ worlds. Then it was on to the projects, preceded by an image of the famous Fiat factory in Turin (an architecture that acts as both a brand and representative of its inner workings): 1. Growing Place, a dedicated art-science studio. An architectural piece where the focus was modularity and use of space. Here modulation and solidity serve as support mechanisms for the activities and decorations of the school children. Because the architecture becomes and integral part of school activities, children are said to have developed caring and respect for the building surfaces/ elements. The pre-school work also seems to have been affected. School teachers note that “the children are doing different, ‘deeper’ work.” 2. Fred Segal Beauty: the ‘problem’ here involved the generation of long-lasting branding (which is what characterizes Fred Segal, from its light ‘red-white-and-blue’ to the beach shack architecture of the boutiques). “How does one create longevity in an ever-changing fashion space?” (M)Arch, in this case, did shift the brand-idea a bit to the slightly ‘Cremaster mechanical’, blended with ‘lounge modern’, but again (also) very light. This was their take on an ‘exposure of the beauty process’. The question remains, regarding the look: is it the use of ‘Americana’ or the use of lightness, or simply client faithfulness, that has allowed Fred Segal branding to last long? Of course, branding is more than look. In order to expand branding, it was also important for the architectural team to “enhance existing energy” and “focus on the users of the space”. 3. Factory remodel for fashion designer Tadashi: 30,000 sqft showroom, design, and manufacturing facility. It was conceived in slices and sections (derived from the long unidirectional building and the lineal concept of an assembly line). From the few slides shown, strong treatments of transparency/ translucency were applied to the precise boundaries between production areas (so, clients could observe the industrial process through a high point on a boundary, and various production areas were separated to various degrees by other slices). 4. Getty Family Room competition: A rich, modular, active space for children, but with ‘structure’ typical of Getty branding. Unexpected experiences are created through the independent connection of many separate elements (1+1= 3). On the side walls a general atmosphere is created by projections showing other Getty galleries. 5. HBO Films- LA: In a collaboration with Trollbäck, the new HBO offices blend real and digital spaces. Architecturally, the space is divided into public reception and work. The public spaces take on a hyper-magnification of branding, since this client not only mentioned branding, but actively lived it, and even brought the architecture team into corporate meetings for movie production, to see what exactly went into branding the new HBO look. Giant letter stencils, distorted movie lounge, combined vistas… The work area was separate, but there Trollbäck brought vistas and viewpoints to the crammed offices and hallways. In a very Diller + Scoffidio approach (based itself on older performance-art studies of interactive architecture), Trollbäck conceived of views to the LA outdoors, lenticular self-promos of HBO work on walls, and time-delayed shots of other parts of the building (which could include anything from different environmental conditions to famous actors walking around). Trollbäck’s British representative highlighted the importance of his role by discrediting local architects

Everlasting doors at the Growing Place.

(in their ‘compartmentalized fragmentation’ and the ‘inability to communicate as effectively as marketers or communications designers’; nice ice-breaker). Movies, commercials, network branding, environmental design, music, theatrical productions, magazines, books, print, snowboards and t-shirts, not to mention their award winning ping-pong team. Quite well known in the AIGA, and even a bit in the AIA, Trollbäck has worked with Morphosis on communication design for the facades of a large building, and the interior remodel, with (M)Arch, for HBO Films in Los Angeles. All in all, the summer evening in Santa Monica was temperate, but the crowd was rowdier than usual (maybe I was just noticing ‘different’ things this evening). As one woman attempted to compliment Trollbäck on their humanizing and fun site-specific NY campaign. She had lived in New York for many years, and would have loved to experience the advertising. She highlighted the fact that it was very clever to use humor in the study of communication. One definitely could hear the snickering in the back, and almost feel the tension building up (“of course it is clever to use humor in marketing”… “how dare a non-theorist-architect-professional speak”). Then there were the people in the back, disguising their laughter and pointing at the speakers (I don’t know if it was due to Todd Erlandson’s slightly frazzled look, or that British gentleman trying to look oh-so-cool leaning back and in his tight little black outfit, but one thing I do know is that I’ll definitely stand at the back of presentations from now on). Reaction, on the other hand, seemed positive when David Erdman raised the question of ‘longevity’ in architecture, while also aiming at ‘authorship in the use of technology’. To the first issue, well, the usual answer: the architecture is neutralized in favor of the user. But there is always the issue of all the temporality-prone details (which do add up), even at the level of materiality. Even (M)Arch’s favorite neutral architecture, the Growing Place, will soon be outdated in the finish of its cabinets and the swinging of its doors (maybe even that yellow exterior is something of our times). And the ways one does things (the arrangements and placements), also of their time: decks leading to entrances, perhaps, or open-plan rooms with multiple doors opening up an entire side wall. Even the way one approaches the subject (or signs it?). Sure, one is able to continue, on-and-on, when the focus is on approach, as opposed to materiality or tech version, but that is only beneficial to the longevity of one’s personal career. To the outside observer, a signature is simply another affixation to time, a time that dies. Maybe it is better to simply play with the ‘latest’ without worrying about framing or approaching (just do it?).