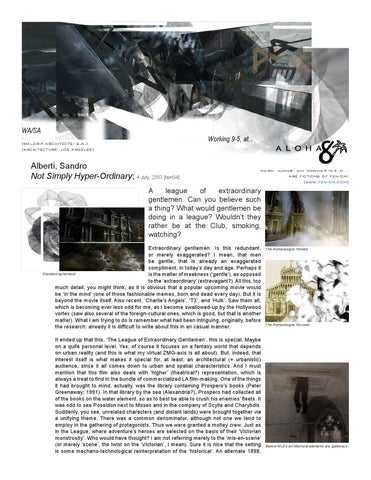 A league of extraordinary gentlemen. Can you believe such a thing? What would gentlemen be doing in a league? Wouldn’t they rather be at the Club, smoking, watching? Extraordinary gentlemen. Is this redundant, or merely exaggerated? I mean, that men be gentle, that is already an exaggerated compliment, in today’s day and age. Perhaps it Standard ephemeral. is the matter of meekness (‘gentle’), as opposed to the ‘extraordinary’ (extravagant?). All this, too much detail, you might think, as it is obvious that a popular upcoming movie would be ‘in the mind’ (one of those fashionable memes, born and dead every day). But it is beyond the movie itself. Also recent, ‘Charlie’s Angels’, ‘T3’, and ‘Hulk’. Saw them all, which is becoming ever less odd for me, as I become swallowed-up by the Hollywood vortex (saw also several of the foreign-cultural ones, which is good, but that is another matter). What I am trying to do is remember what had been intriguing, originally, before the research; already it is difficult to write about this in an casual manner. It ended up that this, ‘The League of Extraordinary Gentlemen’, this is special. Maybe on a quite personal level. Yes, of course it focuses on a fantasy world that depends on urban reality (and this is what my virtual ZMG-axis is all about). But, indeed, that interest itself is what makes it special for, at least, an architectural (+ urbanistic) audience, since it all comes down to urban and spatial characteristics. And I must mention that this film also deals with ‘higher’ (theatrical?) representation, which is always a treat to find in the bundle of commercialized LA film-making. One of the things it had brought to mind, actually, was the library containing Prospero’s books (Peter Greenaway; 1991). In that library by the sea (Alexandria?), Prospero had collected all of the books on the water element, so as to best be able to crush his enemies’ fleets. It was odd to see Poseidon next to Moses and in the company of Scylla and Charybdis. Suddenly, you see, unrelated characters (and distant lands) were brought together via a unifying theme. There was a common denominator, although not one we tend to employ in the gathering of protagonists. Thus we were granted a motley crew. Just as in the League, where adventure’s heroes are selected on the basis of their ‘Victorian monstrosity’. Who would have thought? I am not referring merely to the ‘mis-en-scene’ (or merely ‘scene’, the twist on the ‘Victorian’, I mean). Sure it is nice that the setting is some mechano-technological reinterpretation of the ‘historical’. An alternate 1898,

where the Channel Bridge to France is indeed constructed, and Britannia is represented in statues (as opposed to her flat imprisonment on the re-verse of coins), and, of course, the technologysponsoring ‘Edison-Teslaton’ company (Nicolo Tesla and Edison do hook up in this historical version, pre-dating the combination of their direct and alternating currents). Technology emerging at the wrong time is always a bit more charming (this is known as ‘steampunk’, by the way, a genre of fiction in which science fictional events take place against the backdrop of the 19th Century). Very pleasant because of its nostalgia and decoration (atemporal technology is always hyper-decorated, not unlike the explorations undertaken by Matthew Barney in his ‘Cremaster’ series). Yes-yes, much like ‘Myst’, or ‘Wild-Wild-West’ (what would it be like if a computer were produced with Victorian polished wood and ornate connectors?). But no-no, this is not what I was referring to. Not, indeed, what had begun to catch the eye of critics since the time when all this was published in comic-book format. Focus on the characterization, at least. Something beyond the decoration. Here are characters that are oddly teamed-up, and odd in and of themselves (who really knows much about Victorian ‘super-heroes’; we have our own heroes these days; we are our own heroes these days). And oddly interpreted. They are all older, both ‘old’ and beyond their own narratives. Richer with history, on one hand, and yet with much more diluted history (a sort of critique on sampling… “The 2 primary problems in sampling may be at odds with each other; limiting the sample may reduce generalizability, but obtaining a wider sample looses control of important variables”; ‘Reading and Understanding Research’; 1998). At any rate, we witness copious amounts of characterization, but there is little (unclear) basis for much of it. Captain Nemo is a clear example, so definitely Indian while Verne’s literature had made him so ambiguously ‘Polish’ at some point, before yielding to Indo-revolutionary interests. Then there is Allan Quatermain’s opium addiction, in his post-famous years. And Dracula’s bride, witness as she leads a fashionable life of scarves and high collars (and jitter-transforms into a swarm of bats). Etcetera. Then there are the allusions to the Scarlet Pimpernel, the Fantastic Four, James bond, Sherlock Holmes, and more. This has held the interest of readers since long ago. Then there are the representations of space, which cinema brings to us, in an ‘extraordinary’ manner. Movement through space. Space-time. It is, after all, a race for time. This is when movies become spatial, even architectural. For if it is about time, it is about space. If our heroes must get ‘there’ in time, they must also travel the space from ‘here’ to ‘there’. A race against time; a race against space. And that is what this is about. The ‘in-between space’, and ‘fast space’, among others. This is what is being represented so well in the various marketed previews, and what I hope to see more of soon. There are the more obvious representations (compelling nonetheless, as I still am unable to dis-believe much of movie magic): the eternally-stable symbols of architecture, obliterated in instants. And the necessary contrasts derived from atemporal elements playing together; in scenes such as the one of the slick silver missile launched adjacent historical (historicist?) architecture, we might take pause and see what it really is that is happening there, in what can be described as an architectural contrast;… those versed in architectural styles might note that the definition of the historical forms is emphasized in this particular case, where the lustrous neutrality of the ‘futuristic’ foreground pops out any known features in the background;… and the delicate arched colonnade, thus, emerges triumphantly ‘romanesque’). The movie also offers us the clever new uses of little-known spaces (those decorative little balconies found in library stacks of old, as in my dear ‘alma mater prima’, Berkeley, what could they be for? Here we find an efficient use, close to that of the arrow-slits of medieval castles, tight spaces for the protection of machine-gun ‘archers’). These direct-ratio comparisons (old shape= new use) are not entirely futile, as several ‘games of architecture’ have

The Nautilus slices through space and time.

shown (thinking here of Beevor-Mull Architects as they proposed a series of entry points into an imaginary space that floats over the town of Cambridge; ‘Games of Architecture’; AD Profile #121). And consider Nemo’s (yes, ‘no-name’ is what we must name him) submarine, in its high-speeds able to fold together scenes from distant countries. And Nemo’s car. This one seems to double as a tool for reviewing architectural dynamics. Look here, as it launches over a staircase, calling attention to the directionality of trajectory versus topography (and perhaps the ‘automotive’ versus the ‘pedestrian’). Look there, as it traverses diagonally through the traditional directionality and cross-directionality of the architectural portico. Behold, as its flying mass brings positive attention to the negative volume between tall building facades (“A central area acquires figure character based on relative size and explicit contour; when the horizontal area, in relation to the height of boundary buildings, is too large, the dynamic fields of the buildings will not extend far enough toward the center”; ‘The Dynamics of Architectural Form’; 1977). A similar definition of negative volumes has been attributed in architectural ‘treatises’ to aerial transportation, as it hovers above us, defining the level of some imaginary ceiling. This is more directly exemplified in the ‘League’ as well. Here, however, the Zeppelin serves a further purpose, both delimiting ‘inside’ from ‘outside’ as much as ‘below’ from ‘above’ (certainly, the polymer shell separates our lower spatial experience from the airship volume above, but we also wonder: “what the hell is that thing doing, flying inside?” And, indeed, we see quickly that this is also a matter of scale, and the question becomes reframed: “Is this interior space so enormous that is actually an ‘outdoors’?”). And, well, fireworks. In the end, it is all a matter of fireworks, the most spontaneous architectural space (let us always remember Tschumi’s manifesto, as well as this 4th of July). So much ado about what is, in the end, neither much nor nothing. As we manufacture our daily worlds, let us consider whether we simply want to see. Perhaps we might want to read a little.

Cinema space informs architecture in 'A League of Extraordinary Gentlemen'.

Cinema space informs architecture in 'A League of Extraordinary Gentlemen'.