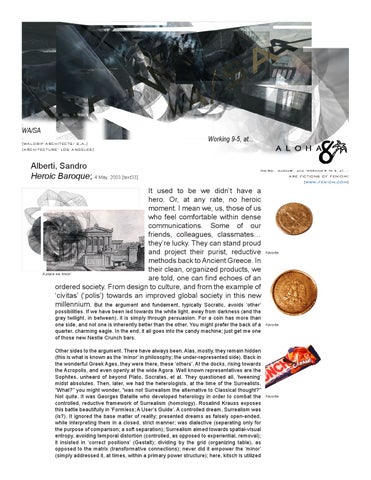 It used to be we didn’t have a hero. Or, at any rate, no heroic moment. I mean we, us, those of us who feel comfortable within dense communications. Some of our friends, colleagues, classmates… they’re lucky. They can stand proud and project their purist, reductive methods back to Ancient Greece. In their clean, organized products, we A place we ‘know’. are told, one can find echoes of an ordered society. From design to culture, and from the example of ‘civitas’ (‘polis’) towards an improved global society in this new millennium. But the argument and fundament, typically Socratic, avoids ‘other’ possibilities. If we have been led towards the white light, away from darkness (and the gray twilight, in between), it is simply through persuasion. For a coin has more than one side, and not one is inherently better than the other. You might prefer the back of a quarter, charming eagle. In the end, it all goes into the candy machine; just get me one of those new Nestle Crunch bars.

Other sides to the argument. There have always been. Alas, mostly, they remain hidden (this is what is known as the ‘minor’ in philosophy; the under-represented side). Back in the wonderful Greek Ages, they were there, these ‘others’. At the docks, rising towards the Acropolis, and even openly at the wide Agora. Well known representatives are the Sophites, unheard of beyond Plato, Socrates, et al. They questioned all, ‘tweening’ midst absolutes. Then, later, we had the heterologists, at the time of the Surrealists. “What?” you might wonder, “was not Surrealism the alternative to Classical thought?” Not quite. It was Georges Bataille who developed heterology in order to combat the controlled, reductive framework of Surrealism (homology). Rosalind Krauss exposes this battle beautifully in ‘Formless; A User’s Guide’. A controlled dream, Surrealism was (is?). It ignored the base matter of reality; presented dreams as falsely open-ended, while interpreting them in a closed, strict manner; was dialective (separating only for the purpose of comparison; a soft separation); Surrealism aimed towards spatial-visual entropy, avoiding temporal distortion (controlled, as opposed to experiential, removal); it insisted in ‘correct positions’ (Gestalt); dividing by the grid (organizing table), as opposed to the matrix (transformative connections); never did it empower the ‘minor’ (simply addressed it, at times, within a primary power structure); here, kitsch is utilized

in a Modernist fashion (display power, as opposed to deformative power); video is exalted instead of raw pulse; the trend is ‘informel’, as opposed to ‘informe’ (cannot deform without following some agenda or meaning). Time is considered as a uniform entity, control is never given up, and positive space is idealized.

The exceptions continue (we could go on). But beyond this, was there ever a time we could call our own? A time when complexity and heterogeneity ruled as a predominant methodology? Indeed, and it is part of our ‘fab’ historical periods as well (nothing as ‘light’ as the 70s, or even the 60s). Our time, I must finally reveal, was the Baroque. As old-school as Ancient Greece, but quite… more. And less, at the moment, for what do you actually known about that period? ... The word means ‘irregular pearl’; the style, from the 17th century, is characterized as being quite ornate... Yes, but there is more, deep enough to have influenced---influential thinkers. An entire new philosophy, originating at the time of Gilles Deleuze (1925-1995), considers the Baroque as the origin of new operations. It’s true. Look it up. It’s all over the Web. Based on contemporary science, the world is revealed as an interconnected mesh (as opposed to a void filled with discreet elements). Culture/ society also points this way, with its complex procedures (multi-tasking, multi-media, etc.)… Also, technology (time and space are constantly distorted by communications and information-gathering devices). This is the new Baroque. And so, back to the Baroque. What is it about this period that lends credibility to complexity? Well, primarily, of course, there is that Baroque eccentricity, that can be read as a coordinated richness. From the outside, we see paintings that are integrally connected to their frames, as frames intertwine with walls and other surfaces that flow outdoors. The façade, for its part, either sinks in to receive the city, or bulges out to proclaim its connection to it. Already this points to the city as a stage for human activity, prior to the ramblings by Baudelairian ‘flaneurs’. Then there is Baroque thought, exemplified by Leibniz (Gottfried Willhelm von-), a renowned philosopher of that time. Leibniz himself was very representative of those Baroque features everybody has now fallen in love with, including multidisciplinary and creative tasks. As one of his contemporaries describes him: “He was one of the last great polymaths - not in the frivolous sense of having a wide general knowledge, but in the deeper sense of one who is a citizen of the whole world of intellectual inquiry. He deliberately ignored boundaries between disciplines, and lack of qualifications never deterred him from contributing fresh insights to established specialisms. Indeed, one of the reasons why he was so hostile to universities as institutions was because their faculty structure prevented the cross-fertilization of ideas which he saw as essential to the advance of knowledge and of wisdom.” A rebel with a cause. Back in 1666, Leibniz was proposing that all reasoning consisted of combinations of basic elements (numbers, colors, shapes, etc.). He also was attempting to collate all human knowledge. For years he fiddled with mathematics and dynamics, which led to interesting views of the underlying relationships between objects (suddenly it wasn’t any more a matter of simplistic reduction to basic elements). This was exposed in his ‘Monadologie’ (1714), a compendium on the

Mere decoration? Hardly. The logarithmic curve is one of the few forms that manages to escape inflection. A vertiginous point where the curve begins to turn around itself until it reverses the direction of rotation, and where, with the radius of the curve at zero, the circle is confused with its center. A fold to a higher power which always comes back and never allows itself to be effected totally.

interconnectedness of ‘monads’ in the universe. Here, each fundamental element (monad) is not merely a building block. Each monad has its own individual identity, and multiple properties and relations. The perceptions/ communications between these entities make up the fabric of the universe. The theoretical treatise is very rich, and no wonder it was taken up by Deleuze for his interpretations (a principal text is entitled ‘The Fold, Leibniz, and the Baroque’). Thanks to the Baroque, we not only have a heroic period, but a formal, legitimate definition for complexity. Deleuze’s readings of the Baroque reapply it not only to an acceptance of multi-tasking, multi-media, and multiple layering, but also to an entire way of ‘doing’ complexity. A key philosophical concern has been how to understand the question of knowing other than by way of the concept. In opposition to the philosophical tradition dominated by Idea (Plato), Cogito (Descartes), or Faculties (Kant), Deleuze posits a materialist/ empiricist philosophy whose legacy lies in Leibniz, Spinoza, and Hume. And so theory becomes an active part of practice, and the ‘general relationship’ changes… . … from concept as mediator between possible and real… … to a direct relationship between real and a complicated virtual that is made up of all possible realities.

In other words, reality is simply a constantly folding-unfolding virtuality (‘the fold’). Here the universe can now be seen as an endless pliable surface, where any noticeable object is merely the high or low point of a wrinkle (fold). And these folds are made to appear and disappear by force vectors. Sometimes a vector pushes a fold to life, as it pulls another one flat, extinguishing it. Nations rise and fall, as do terrorists and viruses, and trends, as well as meanings in a particular graphic-design layout. We will never distinguish every possible cause and effect, precisely because they are actions in time, as opposed to elements in space, but we are able to operate within general frames. Out of chaos, order (formally, chaos theory also shows that ordered points of bifurcation emerge in any chaotic system), where the elements of any design are refined to the inflection (the ‘point’ on the fold), the vector, and the frame. Wonderful for video and game designers, who deal with events and already have vectors and NURBS as direct tools of digital design. But so do graphic artists, in their most basic tools. For what is it to effect a Photoshop filter, other than a manipulation of intensity and vector? As we apply software filters to our images, we cannot hope for more than a general understanding of the result. And when we create line art, we deal with elements, not as forms, but through their mathematics and nodes of influence. And we do this every day. Every day, we as designers come upon tools and methods that are no longer decorative in the Classical sense. But some of us continue to believe that this should not distract from a controlled understanding of form, as opposed to figure (‘figura’: changing form; form + event). Figure, or form? Even in the most controlled environments, one may find figures looming. Consider the following: “In the Christian West the mystery is called the Incarnation, and the Renaissance painters never stopped questioning it in their paintings of the Annunciation. This theme of the Annunciation provided the opportunity to construct a complete image to a higher power; thus we find each of the 3 elements in it, but they appear twice - once explicitly, and once implicitly [inflection, vector, frame]. Thus, the wing of the angel describes a magnificent inflection, pure sign, in opposition to the folds or the Virgin’s robes. Similarly, a first vector links the angel to the Virgin, through the simple gaze of the angel... Very often, however,

Regarding the influence of the Baroque on modern thought and practice. Focus on concepts of folds and vectors.

Regarding the influence of the Baroque on modern thought and practice. Focus on concepts of folds and vectors.