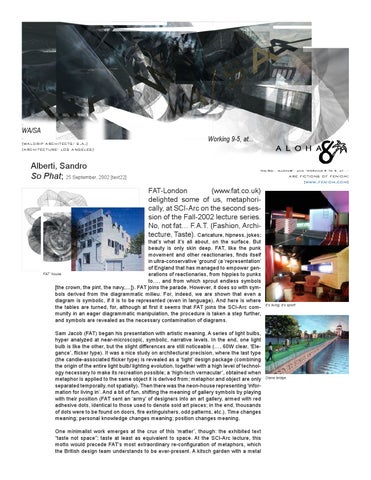 FAT-London (www.fat.co.uk) delighted some of us, metaphorically, at SCI-Arc on the second session of the Fall-2002 lecture series. No, not fat… F.A.T. (Fashion, Architecture, Taste). Caricature, hipness, jokes;

that’s what it’s all about, on the surface. But beauty is only skin deep. FAT, like the punk movement and other reactionaries, finds itself in ultra-conservative ‘ground’ (a ‘representation’ of England that has managed to empower gen‘FAT’ house. erations of reactionaries, from hippies to punks to…, and from which sprout endless symbols [the crown, the pint, the navy,…]). FAT joins the parade. However, it does so with symbols derived from the diagrammatic milieu. For, indeed, we are shown that even a diagram is symbolic, if it is to be represented (even in language). And here is where the tables are turned, for, although at first it seems that FAT joins the SCI-Arc community in an eager diagrammatic manipulation, the procedure is taken a step further, and symbols are revealed as the necessary contamination of diagrams. Sam Jacob (FAT) began his presentation with artistic meaning. A series of light bulbs, hyper analyzed at near-microscopic, symbolic, narrative levels. In the end, one light bulb is like the other, but the slight differences are still noticeable (…, 60W clear, ‘Elegance’, flicker type). It was a nice study on architectural precision, where the last type (the candle-associated flicker type) is revealed as a ‘tight’ design package (combining the origin of the entire light bulb/ lighting evolution, together with a high level of technology necessary to make its recreation possible; a ‘high-tech vernacular’, obtained when metaphor is applied to the same object it is derived from; metaphor and object are only separated temporally, not spatially). Then there was the neon-house representing ‘information for living in’. And a bit of fun, shifting the meaning of gallery symbols by playing with their position (FAT sent an ‘army’ of designers into an art gallery, armed with red adhesive dots, identical to those used to denote sold art pieces; in the end, thousands of dots were to be found on doors, fire extinguishers, odd patterns, etc.). Time changes meaning; personal knowledge changes meaning; position changes meaning. One minimalist work emerges at the crux of this ‘matter’, though: the exhibited text “taste not space”; taste at least as equivalent to space. At the SCI-Arc lecture, this motto would precede FAT’s most extraordinary re-configuration of metaphors, which the British design team understands to be ever-present. A kitsch garden with a metal

boat anchor, a raw concrete edge, and plaster dwarf sculpture could be reconstituted via architectural-metaphorical tools, whereupon a more coherent grouping is revealed: the trans-Atlantic ocean liner + Brutalism + ‘everyday man’ served by a social agenda. The procedure would appear to be diagrammatic, for it operates coherently and uniformly upon existing symbols. But the operation resorts to the use of memory, of subjectivity. Here, symbols merely produce more symbols, but the resultant narrative is ‘architectural’, because it employs those symbols architects ‘love’. Similarly, the relationship between corporate warehouse and surrounding green-belt could be derived from a better-established one: storage building in ‘early’ Europe (where the connection occurs at the building facades, via reflection of surrounding urban forms and rhythms). Logically, FAT reconfigures the contemporary plain facades to reflect the surrounding vegetation of the green belt, and we end up with reductionist cut-outs of so many tree outlines. The ‘approach’ is also seen at a FAT home in Hackney (the main façade reflects ‘house’, the yard wall reflects ‘garden plants’, the small upper windows reflect ‘height’, the parapet reflects ‘skyline’). At a new night club (The Brunel Rooms), the debased suburban living room meets athletic fields. A new bridge for London incorporates the various ‘memories’ of Princess Diana (in pieces of her favorite park, transposed to a lineal strip). At an advertising agency, lifeguard tower meets picket fence meets picnic area meets football pitch. A private residence combines with military camouflage. Monumental fountain meets fragmented urban corner. It is all like the album cover of Sergeant Pepper’s Lonely Hearts Club Band (Capitol Records, 1967; an image that was also produced at the lecture), but this song is about architecture. The conclusion is probably obvious, a formal dialogue between mathematics and nostalgia, and complexity (excess?). On one hand, contemporary Los Angeles engages in a range of mathematical signs. And then along come the reactionary Brits, with their range of comforting symbols. Representative systems, both, in the tradition of narrative authors such as 19th-century Balzac [I return here to ideas I had already reviewed in text 20]. The mathematical-diagrammatic would have us believe it is much more than merely narrative (a simulation). But here the unifying simulation (the diagram) is never directly accessible to the user (it is as in the case of a video soccer game, that would only present itself as a narrative to any observer who is not actually playing). Two very different sign-systems, we see here, which nonetheless do not manage to propel the user of the architectural space beyond, at best, ‘paidea’ (non-social, individualized ‘simulations’). What is missing is the user, and beyond him/her, the community. Where might we find ‘ludus’ (total simulation; social agreement)?. Perhaps back in Memphis... Back in 1980, Aldo Cibic co-founded the Memphis movement, as a ‘new International Style’. The overall take is now seen, from LA, as quite post-modern, yet it is nonetheless a tool, which Cibic would use to generate user-driven cohesiveness. Memphis has faded, and its protagonists taken on various trajectories (Alessandro Mendini, Hans Hollein, Arata Isozaki, Michael Graves; Ettore Sottsass left the group in 1987). During the past few years, Cibic has been developing a derivative idea, which focuses on users and uses of space, and an appreciation for contemporary fragmentation (see: ‘overwhelming mass media’). Consisting of several sub-projects (tested via academic research at Milan’s Domus Academy), all this is now emerging once again (www.family-business.it). Earlier stages had been published (‘Domestic Factory’, ‘Family Business’), but now the Italian design team proposes massive architectural interventions. The proposal is a world (for now, a city) where Josie meets ‘Robo’ (a robot), in her kitchen-workshop-living-meeting-office-bedroom home, and communities come together in kitchen-workshop-living-meeting-office-bedroom-playroom-education-garden-

entertainment-restaurant-library-daycare spaces. This is not quite surface-’FAT’, for, here, the quirky narratives are merely employed to depict some sense of the possibilities. At the core lies a system of coded rules that would encourage experimentation (a next step in the family-business Web site includes a matrix where visitors might experiment with their own combinations of users, spaces, and activities). “The pleasure does not lie on ‘what will happen next’, but rather on ‘what will happen if’” [Gonzalo Frasca; Ludology, From Representation to Simulation; 2002]. The video game takes over the book. This might be a new prerequisite, if indeed “the forum of ultimate liveliness has been replaced by a dull avalanche of imperceptible transactions”. [Rem Koolhaas; Guide to Shopping; 2001] Wonderland.

FAT-London continues to do its own postmodern thing.

FAT-London continues to do its own postmodern thing.