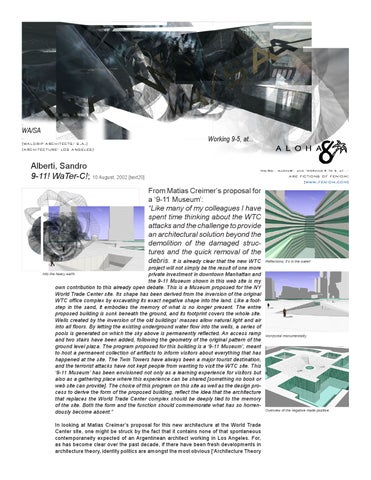 From Matias Creimer’s proposal for a ‘9-11 Museum’: “Like many of my colleagues I have spent time thinking about the WTC attacks and the challenge to provide an architectural solution beyond the demolition of the damaged structures and the quick removal of the debris. It is already clear that the new WTC

project will not simply be the result of one more Into the heavy earth. private investment in downtown Manhattan and the 9-11 Museum shown in this web site is my own contribution to this already open debate. This is a Museum proposed for the NY World Trade Center site. Its shape has been derived from the inversion of the original WTC office complex by excavating its exact negative shape into the land. Like a footstep in the sand, it embodies the memory of what is no longer present. The entire proposed building is sunk beneath the ground, and its footprint covers the whole site. Wells created by the inversion of the old buildings’ masses allow natural light and air into all floors. By letting the existing underground water flow into the wells, a series of pools is generated on which the sky above is permanently reflected. An access ramp and two stairs have been added, following the geometry of the original pattern of the ground level plaza. The program proposed for this building is a ‘9-11 Museum’, meant to host a permanent collection of artifacts to inform visitors about everything that has happened at the site. The Twin Towers have always been a major tourist destination, and the terrorist attacks have not kept people from wanting to visit the WTC site. This ‘9-11 Museum’ has been envisioned not only as a learning experience for visitors but also as a gathering place where this experience can be shared [something no book or web site can provide]. The choice of this program on this site as well as the design process to derive the form of the proposed building, reflect the idea that the architecture that replaces the World Trade Center complex should be deeply tied to the memory of the site. Both the form and the function should commemorate what has so horrendously become absent.” In looking at Matias Creimer’s proposal for this new architecture at the World Trade Center site, one might be struck by the fact that it contains none of that spontaneous contemporaneity expected of an Argentinean architect working in Los Angeles. For, as has become clear over the past decade, if there have been fresh developments in architecture theory, identity politics are amongst the most obvious [‘Architecture Theory

Reflections; it’s in the water!

Overview of the negative made positive.

since 1968’; K. Michael Hays; 1998]. I count myself amongst those interested in the ideas of Ignasi de Sola Morales, Giovanni Sartori, and Bruno Munari, for precisely this reason. Ever since narrative (or, at least, ‘personalization’) became once again fashionable, thanks to tools such as the ‘diagram’, personal narratives have proliferated in the post-post-modern (and, of these, the ‘other-cultural’ seem to hold a particular allure). Neither is this project ‘feminist’ (another of the notable new trends). For, although it does vanish a certain type of phallocentric code, it replaces it with some more of the same (objectivity and conclusion, amongst others). After all, “a feminist architecture is not architecture at all” (‘Architecture and the Text’; Jennifer Bloomer; 1993).

However, there are other contemporary trends that are definitely addressed by this 9-11 proposal. Most notable amongst these, a touch of ‘psychic space’ and a dosage of ‘weak thought’. In a sense, the mere history of the site presupposes the incorporation of psychic qualities into this architecture. But Matias Creimer has actively promoted a perpetuation of the destructive event in its representation as the ultimate goal of destruction: the void. And the procedure by which he implements this does reconsider Modernist thought (a ‘historiographic recollection’ of Modernist tradition). And, inasmuch as my Latin-American nostalgia has not been addressed, the project does accept and emphasize narrative (indicating an evolution past its 1970s prohibition), proposing a smooth space affected by directional traces that both register past events and project possible future ones. But the emphasis tends towards entropy, rather than chaos (reduction, rather than a complexity that might include social, economic, and biological elements). It tends to a mechanized (rule-based) restructuring that might as well be analyzed under its own terms. This ‘ludus’ (rule-dependent play), however, stops short. After just one move, the game seems to be over: the existing buildings are made into inverted voids, and then… Apparently, nothing. In all fairness, this is one loaded move (a symbolic building is produced out of a void, and is re-empowered as a ‘non-skyscraper’, and retains the footprint necessary for the propagation of memory). But then? Nothing. Well, not really. Not actually ‘nothing’. There is something. It is just very subtle, and easy to dismiss, but includes the most powerful (potential?) part of this architecture. First of all, there is a new underground use for the plaza (the negative space becomes positive). This, however, only helps, to commodify the project, as it now has several underground floors that spread out in fluid ‘corporate’ fashion (are these available for lease or sale, illuminated by the light wells derived from the old building footprints?). The space is fully described as a ‘museum’, but we are not given any clear idea of how it answers to the prerequisites of this architectural type (I keep on feeling it is an office space; is this the ‘play’?). If the cycle of rule application had been taken a few iterations further, an interesting deconstruction might have been derived. Here I am contaminating the critique with my own failed experiences (there was a graduate-school project; ‘The Deconstruction of the North American Home’’, in which I also vanished and inverted a prototypical building; in the end, I was criticized, not for lacking formal clarity, but for having limited the possible sequence of iterations). But even the rule-logic at the ‘9-11 Museum’ seems slightly odd. Subtractive interventions are provided, not only by the footprints of the original buildings, but by the 3 entrances that lead into the new underground floors (one grand ramp and 2 stairs). The placement of the building footprints, provided by history and context, is understandable. But what about the 3 access points? They follow the curvature of the perfectly-circular floor pattern in the plaza, in such a way that they could easily be construed as representing the hour

and minute hands of a symbolic clock (perhaps marking that fateful 9-11 hour?; this type of move, of course, reminiscent of Picasso and other artists reinserting themselves into their works as some reflection or another, would be quite uninteresting). The treatment of the entrances, however, intelligently addresses the weight of the earth (the thickness of the entablature; ‘burden’), the length of the transition (the length of the ramp; ‘memory’), or smoothness (continuous surfaces; ‘finality’), much as Boullée had prescribed so many years ago for the production of burial places: “Architects were counseled to lower the level of the ground a few steps from the surrounding terrain. That way the kinesthesis of walking down into the earth would affect the visitors in a powerful way… Boulleé created a claustrophobic sense in his funerary architecture through vastly elongated horizontal bands,… as well as with simple, unadorned, monotonous surfaces…” Richard Etlin in ‘Symbolic Space’; 1994 On the whole, this is very appropriate, as Matias Creimer’s minimalist intervention is quite the heir to the symbolic traditions of the Beaux Arts, transformed through Modernism (I am thinking here, particularly, of those spaces of absence, popular in the Enlightenment, when architects would set aside empty spaces dedicated to some abstract concept; here, of course, there is no resort to templelike enclosures). There is a slight tinge of a ‘Balzac text’, as it were, that would limit urban richness to a limited repertoire of stories and sequences. Yet here is something else, one final twist; the issue of the groundwater. Indeed, this (minor?) detail is what propels the project, beyond all previous considerations, into the realm of ergodics (rulegoverned mechanics of representation). Now there is something in the architecture, beyond users’ interpretations (something dynamic, and linked to other processes in the NY context). Until now, there had only been one connection to the world (the project Web page, www.otherzone.com; something to add a sense of the theatrical and aleatory, through connections to ‘weirder’ projects, such as the ‘project’). Now, in one fell swoop, users are reconnected to the natural geography (beyond the built environment; ‘Delirious New York’ re-capped), to the ways in which the feature of the river is affected by climatological or social changes, and to rhythms-beats-cycles, and the filling of the void (a logical ‘next-step’ in the carving-out operation; water is the new ‘tenant’, existing beyond market forces). Water for life. Who will drink it now?