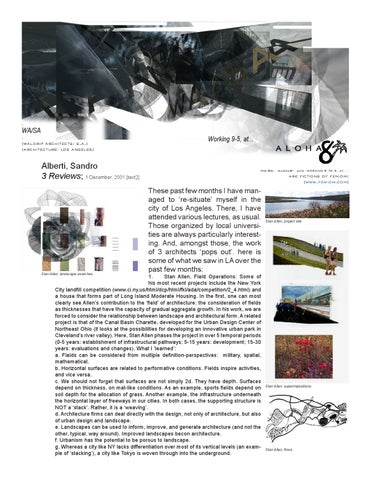 These past few months I have managed to ‘re-situate’ myself in the city of Los Angeles. There, I have attended various lectures, as usual. Those organized by local universities are always particularly interesting. And, amongst those, the work of 3 architects ‘pops out’. here is some of what we saw in LA over the past few months:

1. Stan Allen, Field Operations: Some of his most recent projects include the New York City landfill competition (www.ci.ny.us/html/dcp/html/fkl/ada/competition/2_4.html) and a house that forms part of Long Island Moderate Housing. In the first, one can most clearly see Allen’s contribution to the ‘field’ of architecture: the consideration of fields as thicknesses that have the capacity of gradual aggregate growth. In his work, we are forced to consider the relationship between landscape and architectural form. A related project is that of the Canal Basin Charette, developed for the Urban Design Center of Northeast Ohio (it looks at the possibilities for developing an innovative urban park in Cleveland’s river valley). Here, Stan Allen phases the project in over 5 temporal periods (0-5 years: establishment of infrastructural pathways; 5-15 years: development; 15-30 years: evaluations and changes). What I ‘learned’: a. Fields can be considered from multiple definition-perspectives: military, spatial, mathematical. b. Horizontal surfaces are related to performative conditions. Fields inspire activities, and vice versa. c. We should not forget that surfaces are not simply 2d. They have depth. Surfaces depend on thickness, on mat-like conditions. As an example, sports fields depend on soil depth for the allocation of grass. Another example, the infrastructure underneath the horizontal layer of freeways in our cities. In both cases, the supporting structure is NOT a ‘stack’. Rather, it is a ‘weaving’. d. Architecture firms can deal directly with the design, not only of architecture, but also of urban design and landscape. e. Landscapes can be used to inform, improve, and generate architecture (and not the other, typical, way around). Improved landscapes becon architecture. f. Urbanism has the potential to be porous to landscape. g. Whereas a city like NY lacks differentiation over most of its vertical levels (an example of ‘stacking’), a city like Tokyo is woven through into the underground.

You may review some of Stan Allen’s work at: http://udc.saed.kent.edu/Event%20Pages/stanley_allen_field_associates.htm 2. Marc Angelil/ Sarah Graham, Angelil-Graham. They combine separate yet similar approaches to the development of architecture. Sarah Graham focuses on the integral connection of functional, technical, economical, environmental, and aesthetic issues. I already knew their work, but discovered some interesting things: a. For the ‘fluid’ forms at Adidas- Germany, they employed the services of a ‘master sculptor’ and focused on ‘ideal’ forms (rather than following the idea of choosing from amongst various ‘mass produced’ digital forms). In the words of Marc Angelil (non-literatim; illiteratim?), whenever they tried to affect the forms through digital deformations in Maya, the results were ugly and unacceptable. The fact that they (Angelil, more than Graham, I think; see below) referred to the forms as ‘sculptures’, rather than ‘blobs’, also seems to situate them in an ‘older generation’. b. It seems that their work changed drastically for the Adidas project. The project is much more fluid, than their more ‘typical’ ‘orthogonal-unfolded’. I feel, as they themselves explained, that this is due to the fact that the focus, in that project, was aesthetics (corporations such as Adidas as ‘imagegenerating machines’). However, how much can also be attributed to the popularity of the ‘blob’ in design (due in large part to the complex-curve possibilities of new 3d-design tools)? Or the flows of the landscape, of course? c. Their honest interaction was very inspiring. Rather than pretending to be in agreement about everything, they were very good about presenting completely divergent viewpoints about certain topics. For example, ‘she’ does not see several digital programs as inspiring design in a very obvious and direct way. ‘He’, on the other hand, feels very inspired by much digital design. Of course, this comes down to the reality of 2 human beings living life. However, one so often finds manipulated perception in the generation of corporate identities. Some audience members had a difficult time pinpointing any one answer from the speakers. Quite nice. 3. Lars Spuybroek, NOX: Well known for his Fresh Water Pavillion (from the H2O Expo in Holland; 1996). Spuybroek is one of those architects who explore the new instruments of architecture in a fluid way. His structures ‘flow’, and are connected and informed digitally. Who was it that complained recently about this type of architecture? More and more people seem to jump from ambiguity and right into a defined camp in the divide that has been formed by ‘fluid architecture’. Mr. Spuybroek, by the way, had an interesting story about his critics back in Holland. Fed up with his Water Pavilion, government officials have eliminated any real water from the interior, intending to refill it with iconic statues of dolphins. Amazing, that even after architecture of this sort has been commissioned and even ‘established itself’, it is still subject to effective rejection and censorship (I guess human beings are just part of that overall process known as ‘decay’; which, according to landscape artists, we should embrace). Anywho, also from the author’s mouth, I learned that some of the digital machinery of the building had been adversely affected by the fog that would flow through the building day after day. The conflict between digital and natural flows (between entropy and chaos?). Conflict. That could definitely have been the title of the lecture, at UCLA’s de-Café space. The usual conflict, of course, was also present, as the speaker’s video played without sound, and sudden shifts of brightness and contrast startled the jetlagged architect. And was it his tired ‘state’, or mere mental hyper-activity, that made his presentation a bit too fluid? It reminded me of myself, and of Teddy Cruz (in the San Diego/ Mexico region); of the way we become so excited about a topic that we either delve too much into theory, or just can’t find the words to ‘express’. Well, it was nice meeting him, and ‘placing’ him (within the flow of this quarter’s lecture series and other architects’ ‘oeuvres’).