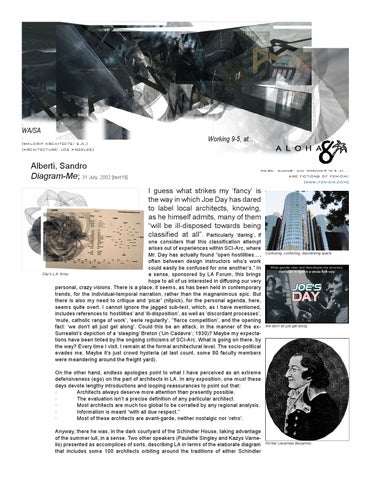 I guess what strikes my ‘fancy’ is the way in which Joe Day has dared to label local architects, knowing, as he himself admits, many of them “will be ill-disposed towards being classified at all”. Particularly ‘daring’, if

one considers that this classification attempt arises out of experiences within SCI-Arc, where Mr. Day has actually found “open hostilities…, often between design instructors who’s work could easily be confused for one another’s.” In Day’s L.A. Array. a sense, sponsored by LA Forum, this brings hope to all of us interested in diffusing our very personal, crazy visions. There is a place, it seems, as has been held in contemporary trends, for the individual-temporal narration, rather than the magnanimous epic. But there is also my need to critique and ‘picar’ (nitpick), for the personal agenda, here, seems quite overt. I cannot ignore the jagged sub-text, which, as I have mentioned, includes references to ‘hostilities’ and ‘ill-disposition’, as well as ‘discordant processes’, ‘mute, catholic range of work’, ‘eerie regularity’, ‘’fierce competition’, and the opening fact: ‘we don’t all just get along’. Could this be an attack, in the manner of the exSurrealist’s depiction of a ‘sleeping’ Breton (‘Un Cadavre’; 1930)? Maybe my expectations have been tinted by the ongoing criticisms of SCI-Arc. What is going on there, by the way? Every time I visit, I remain at the formal architectural level. The socio-political evades me. Maybe it’s just crowd hysteria (at last count, some 80 faculty members were meandering around the freight yard).

We don’t all just get along.

On the other hand, endless apologies point to what I have perceived as an extreme defensiveness (ego) on the part of architects in LA. In any exposition, one must these days devote lengthy introductions and looping reassurances to point out that: · Architects always deserve more attention than presently possible. · The evaluation isn’t a precise definition of any particular architect. · Most architects are much too global to be corralled by any regional analysis. · Information is meant “with all due respect.” · Most of these architects are avant-garde, neither nostalgic nor ‘retro’. Anyway, there he was, in the dark courtyard of the Schindler House, taking advantage of the summer lull, in a sense. Two other speakers (Paulette Singley and Kazys Varnelis) presented as accomplices of sorts, describing LA in terms of the elaborate diagram that includes some 100 architects orbiting around the traditions of either Schindler

or Neutra (Frank Israel once told Joe Day that “most of LA architecture could be seen in terms of the competing legacies of Neutra and Schindler”; Schindler interpreted Wright and Loos, while Neutra focused o Corb and Mies; Neutra, boring and tightly-wound, complained constantly about the Schindlers’ bohemian ways; the trend in the 80s was Schindlerian, and, in the 90s, indebted to Neutra). Several of the architects depicted simply continue this bi-polar tradition ‘directly’, in a ‘progressive’ fashion (thus Neutra ‘evolves’ (past Eames) into Hodgetts, Fung, O’Herlihy, MarmolRadziner, and Bestor, while Schindler ‘progresses’ (past Lautner) through to Scarpa, Mack, and others. Then came Gehry, at some point, primarily, and through some alchemist process, managed to inject extra-architectural concerns (his residential projects lateralized the Schindler agenda, while his corporate projects informed the Neutra camp). The new ‘lateral’ groups of architects refer to other disciplines or priorities, rather than mere architectural progress (on the side of Neutra, the ‘Product’ group; on Schindler’s side, the ‘Process’ group). Process designers, according to Day, focus on subjectivity, authorship, layering, framing, trade, and art. Product architects prefer objectivity, criteria, openness, transparency, industry, and complexity. Both groups range between ‘physical’ and ‘theoretical’ extremes. Thus Saee and Bouton tend to the ‘physical’ (but the first focuses on materiality, while the second aims to mechanization). And Pollari-x-Somol and Zago present themselves as more theoretical practices (but the first aims at the ‘abstract’-product, while the second focuses on the ‘conceptual’-process). Within the Process camp, Moss is said to rival art (what kind of art?), while Fisher serves it completely. In the Product group, Lynn and Denari are most complex (Denari?), while Tolkin and DO/Yu are the simplest. Finally, Irving Gill derives his own camp, beyond Neutra’s and Schindler’s branches. This ‘Pragmatic’ group is inspired by Gill’s blending of Modernism with eclectic local traditions (resulting in a ‘civic Modernism’ of sorts). A ‘vernacular’ branch is represented by Sheine and Polizoides, and others, while Koning+Eizenberg and Sherman, etc., represent a ‘contemporary’ take of the pragmatic.

Adjacent relationships lead to the interesting questions. Is Richter really more abstract than Lynn, and less abstract than Díaz-Alonso? Are Marmol-Radziner really stuck in the generic Neutra timeline, together with Barbara (Bestor)? The adjacencies also lead to questions of separation. Why should the ‘abstract’ and ‘conceptual’ be so separate. It is almost as if the Product and Process charts belonged on top of each other (a bi-dimensional set of connections hardly seems to do justice to multidimensional architectural inquiries). So many other questions to be asked. At first, architects clamored to address diagrams and relationships in their product. This later expanded to the ‘context’ (most recently popularized by the ‘LA Now’ texts). How excited are they now, as the most recent subjects of diagrammatic representation?