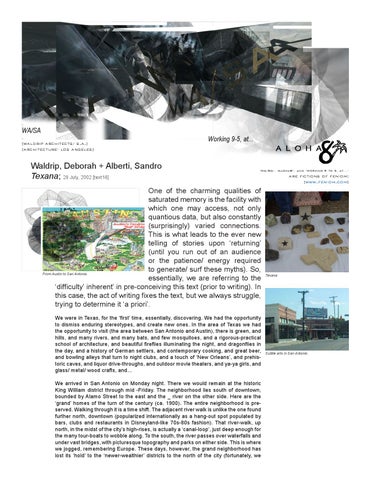 One of the charming qualities of saturated memory is the facility with which one may access, not only quantious data, but also constantly (surprisingly) varied connections. This is what leads to the ever new telling of stories upon ‘returning’ (until you run out of an audience or the patience/ energy required to generate/ surf these myths). So, From Austin to San Antonio. essentially, we are referring to the ‘difficulty’ inherent’ in pre-conceiving this text (prior to writing). In this case, the act of writing fixes the text, but we always struggle, trying to determine it ‘a priori’. We were in Texas, for the ‘first’ time, essentially, discovering. We had the opportunity to dismiss enduring stereotypes, and create new ones. In the area of Texas we had the opportunity to visit (the area between San Antonio and Austin), there is green, and hills, and many rivers, and many bats, and few mosquitoes, and a rigorous-practical school of architecture, and beautiful fireflies illuminating the night, and dragonflies in the day, and a history of German settlers, and contemporary cooking, and great beer, and bowling alleys that turn to night clubs, and a touch of ‘New Orleans’, and prehistoric caves, and liquor drive-throughs, and outdoor movie theaters, and ya-ya girls, and glass/ metal/ wood crafts, and... We arrived in San Antonio on Monday night. There we would remain at the historic King William district through mid -Friday. The neighborhood lies south of downtown, bounded by Alamo Street to the east and the _ river on the other side. Here are the ‘grand’ homes of the turn of the century (ca. 1900). The entire neighborhood is preserved. Walking through it is a time shift. The adjacent river walk is unlike the one found further north, downtown (popularized internationally as a hang-out spot populated by bars, clubs and restaurants in Disneyland-like 70s-80s fashion). That river-walk, up north, in the midst of the city’s high-rises, is actually a ‘canal-loop’, just deep enough for the many tour-boats to wobble along. To the south, the river passes over waterfalls and under vast bridges, with picturesque topography and parks on either side. This is where we jogged, remembering Europe. These days, however, the grand neighborhood has lost its ‘hold’ to the ‘newer-wealthier’ districts to the north of the city (fortunately, we

think, since this has brought a creative artistic community into King William to take care of ongoing renovations and the development of an artistic axis around southern Alamo Street). Noteworthy: 1. Although artistically stimulating, the entire row of studios and galleries at Alamo Street remains oddly subdued (facade and signage treatments entirely in subtle earth tones; half-empty spaces with only the necessary elements employed for production or aesthetic purposes; zoning, anyone?). 2. The Blue Star Brewery offers Bergamot Station ambiance by the river, some of the best brews we have ever tasted, and a delicious, chunky Portobello-mushroom sandwich (at the south end of King William). 3. The use of urban space is not encouraged post 11 pm through the work week (this is in many ways a small sleepy town). 4. Oddities in the urban grid (diagonals and multiple-road intersections) are said to have arisen from the development of cattle trails, which typically formed at the ‘shortest-diagonal’ distances between points. The airport is located oddly in the midst of the upscale neighborhoods, and scattered missions have led to the development of conflicting grids. 5. Light beige bricks and stone are the city’s preferred construction materials. 6. Stars-stars-stars; patriotism in Texas continues at an all-time high (look for Texas-stars in the pavement, publicity, flags, and floral arrangements; also in demand, the American flag, popular as an umbrella or banner). 7. July is indeed the hottest month of the year in Texas. Humidity is also to be enjoyed. This leads to the extensive use of shaded and interior (air-conditioned) spaces (as well as the prominence of support structures, such as chilling stations and water tanks). Locals throughout the San Antonio-Austin valley seem to have opted for the perfect balance between indoors/ outdoors (the outdoor experience is not sacrificed or avoided; best left for post-9 pm, however). Oddest reflection of ‘sun fear’: café umbrellas under a shady bridge. 8. The enormous Tower of the Americas (750-feet-tall), albeit out of scale in relationship to the entire city context of low masonry buildings, does have local precedents. Think of Texas’ tall oil towers and topographically-dominating water-storage tanks.

Austin, an hour-drive north, was probably the most architectural of our few Texan stops. One of the tourist attractions, believe it or not, is the enormous bat population to be found in this city (1.5 million of them reside in one quite accessible place, during the summer: the Congress Avenue Bridge). The locals are so familiar with this ‘time-space’ that they time it to the minute. At 8:20 pm (just barely sunset) a couple of boats swayed under the enormous 1910s bridge, filled with tourists. Across the ‘way’, on the other shore, a grass amphitheater, also full of eager ‘voyeurs’. Also on top of the bridge, and at the conveniently-located TGIF terrace. Within minutes, an enormous swarm of spectators had formed, reflected in the air by the additive maneuvers of the winged creatures, heading away from the sunset, in a fluid smoke-like in-form. All in all, an ephemeral manifestation of multiple events: an insect-free bat generator between the shimmering waters and the concrete slabs 100 feet above; impromptu observation platforms throughout; a dynamic and constantly-modulating envelope framing the swarm of bats. Austin would yield another evaluation of social space, later that night. 6th Street, renowned as the city’s weekend night ‘spot’, thrives on the imagery of Bourbon Street (a tightlypacked row of bars, lounges, and pizza parlors, providing liberal quantities of alcohol and rowdiness). Up the hill, at 7th, we opted for ‘O2’, which, already from the street, distinguished itself as a more contemporary and sophisticated option (slick metal doors, a weathered brick facade). Inside, a cast-

concrete bar, open industrial layout, asymmetrical layout, exposed construction materials. All this, also typical back in LA. A difference, perhaps, lay in the use of certain ‘utilitarian’ treatments as pure decoration (the use of metal moved beyond ‘strict’ requirements at the sliding entry doors, applied throughout in the form of contemporary wainscoting; the use of glass block at a solid wall, serving to diffuse electric light; the insistence on ‘sponsor labels’ at the bar and selected spots). Quite empty, apart from its techno beats at 9 pm, and seeming to be fighting a double battle (against an excessive local interest in monotonous rap, and against the strong tradition of a 6th Street that, although close by, seemed so far away). It never had a chance. Elsewhere in town, in the following daylight, an enormous state capitol and a refined school of architecture presented themselves. The architecture department at the University of Texas takes a privileged position at the eastern entrance to campus encompassing various adjacent buildings in solid ‘revival’ style. It did not take long to become aware of the fact that oil money and society at large favor local architectural endeavor; that architecture in this place is developed as a primarily pragmatic and tectonic practice, far from the chunk of campus claimed by the Arts; that theory and play are relegated to the realm of interior design; and that, for all its ‘experiential’ quality, a frame is still a frame. Southward, the city’s capitol could be discerned, even many miles away, an enormous frame rising through the urban fabric. Its vast museum’s gardens, unable to counteract the building’s tremendous ‘weight’, lead visitors in from the surrounding streets. Crafted in Italian Renaissance style, the textured ‘piano nobile’ is actually the entire main body of the building, rising some 8 stories and serving to accentuate ephemeral qualities in the huge dome (taller than the National Capitol). It was fun to find irregularities in the underlying symmetry, as well as entertain the thought that macho Texas is forever condemned to the use of Austin’s ‘pale rouge’ (‘sunset red’) granite. It would take a while for this structure to disappear from our sights, as we headed past the site for Antoine Predock’s new ‘landscape-massed’ city hall and the satisfyingly flexible rooflines of the new Palmer Events Center (Barnes-Taniguchi-Centerbrook), south, to the towns of German settlers. New Braunfels, Fredericksburg, Gruene, Wimberley, Schertz, Niederwald, Dittlinger, Solms, ... Towns like these are scattered throughout the countryside between Austin and San Antonio, offering a range of local foods and crafts. San Marcos was our gateway to this alter-world. Much like old Bergamo, in Italy’s Lombardy, San Marcos rises to welcome weary travelers and take charge of the surrounding countryside. No ‘uccellini scapatti-scapati’ or café terraces to be enjoyed atop buttresses, as it is SWTSU (SouthWest Texas State University) that spans the hilltop here. The town square is nestled up high though, acting as mediator between the Wonder Cave (formed by an earthquake millions of years ago), and the 98% bio-clean San Marcos River (an outdoor network, consisting of trails, a small lake, and Aquarena Center, a renowned research facility). Beyond the hills, the faerie lands of lore. In the daytime, saturated with the kaleidoscopic reflections of crafted crystals. At night, the stage for image projections in open spaces, underneath the brilliant night sky and hypnotic fireflies.

Actors and spectators mingle at the bridge.

A new pavilion for Austin.

Urban review of San Antonio + Austin, TX, and the valley-between. Part of the trip to SIGGRAPH 2002.

Urban review of San Antonio + Austin, TX, and the valley-between. Part of the trip to SIGGRAPH 2002.