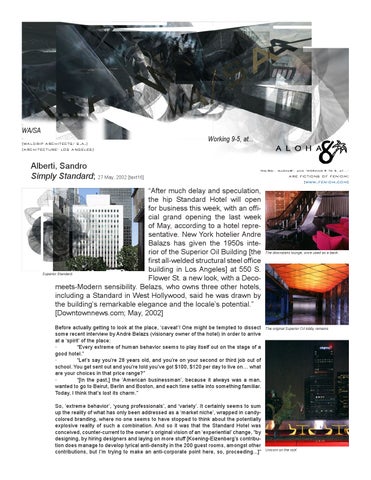 “After much delay and speculation, the hip Standard Hotel will open for business this week, with an official grand opening the last week of May, according to a hotel representative. New York hotelier Andre Balazs has given the 1950s interior of the Superior Oil Building [the first all-welded structural steel office building in Los Angeles] at 550 S. Superior Standard. Flower St. a new look, with a Decomeets-Modern sensibility. Belazs, who owns three other hotels, including a Standard in West Hollywood, said he was drawn by the building’s remarkable elegance and the locale’s potential.” [Downtownnews.com; May, 2002] Before actually getting to look at the place, ‘caveat’! One might be tempted to dissect some recent interview by André Belazs (visionary owner of the hotel) in order to arrive at a ‘spirit’ of the place: · “Every extreme of human behavior seems to play itself out on the stage of a good hotel.” · “Let’s say you’re 28 years old, and you’re on your second or third job out of school. You get sent out and you’re told you’ve got $100, $120 per day to live on… what are your choices in that price range?” · “[In the past,] the ‘American businessman’, because it always was a man, wanted to go to Beirut, Berlin and Boston, and each time settle into something familiar. Today, I think that’s lost its charm.” So, ‘extreme behavior’, ‘young professionals’, and ‘variety’. It certainly seems to sum up the reality of what has only been addressed as a ‘market niche’, wrapped in candycolored branding, where no one seems to have stopped to think about the potentially explosive reality of such a combination. And so it was that the Standard Hotel was conceived, counter-current to the owner’s original vision of an ‘experiential’ change, “by designing, by hiring designers and laying on more stuff [Koening-Eizenberg’s contribution does manage to develop lyrical anti-density in the 200 guest rooms, amongst other contributions, but I’m trying to make an anti-corporate point here, so, proceeding...]”

The downstairs lounge, once used as a bank.

Unicorn on the roof.

One would think that this is downtown’s new hang-out with its fab lounge and chic lobby popping out onto the streetscape at night, and with publicly-announced gatherings at the roof terrace (a veritable stimulator of ‘hip’ lifestyle). Not quite. Much more than the old Modernist carcass of the Superior Oil Building remains. A carefully controlled matrix prevents any deviation. No pictures are allowed, one cannot host a significant gathering in any of the ‘Wow’ suites, and no matter how chic or elegant, all visitors must evacuate the premises after hours. These, from amongst a lengthy list of memorized rules enounced by a hoard of synchronized security officers, are certainly standard fare embraced by Baron Conrad Hilton (Hilton hotels) and his dull traveling devotees, but it is not anything that I (extreme and varied young-professional) would expect of a place that sells swimming suits in vending machines, invites people to crowd into pods with vibrating water beds, and casts sexy video projections onto surfaces beyond its own property lines (a place where the word ‘Standard’ has been flipped upside down). It is a disservice, and a trap. Young professionals are lured here (particularly, in the opening weeks of expected ‘showcase’), to a place where no rules are immediately visible either in its physical or Web presence, only to be embarrassed and chastised for gathering with too many friends or daring to take a single picture of the wonderful interiors. In the end this boutique hotel is just what it proposes to be: standard. But it certainly offers great design ideas, mostly in the ‘cheap and chic’ range. No valet parking, but the building is adjacent to an easily-accessible parking lot. The exterior is entirely ‘un-done’, both in the stark Modernist façade and the parking lot left to look like any of the local pay-per-day lots. Of course, this blandness relies on the typical series of elucidatory details (already from the parking turf one gets an easy glimpse of the so-contemporary ephemeral glazing at the back entrance; at front the lobby and its chic furniture is emphasized by golden light in the nighttime streetscape, and framed by ‘particular’ windows; carefully placed signs indicate the general stance: “park here”, “sleep here”,…). The elevators are very speedy, making for a generalized disintegration of vertical separations; allowing the public spaces at the building base and rooftop to come together. The rooftop is the jewel, an exterior living room furnished in neo-lounge weather resistant style. On a lower level, to the north, one is greeted by manicured bushes (shaped like unicorns), surrounded by a field of red cubes that act as plantholder-seating area and fragment towards yellowish tables and chairs at the edge of the roof (all in shiny plastic). Large matching speakers diffuse music throughout (perhaps from the in-house CD: ‘Standard Sounds Volume 1: Room Service’, available at Amazon.com). All of the edge is clad in folding metal sheets. And beyond, the view is quite interesting, because it is interstitial. I mean, you get a great view, but you’re not really at the top, because this 1950s building is only about 15 stories tall, in the midst of al the neighboring towers that loom some 40 stories taller. And in the end that is quite contemporary, and yet not a part of the redesign, a view that takes in the sporadic rhythm and variety of the adjacent urban context. Much of the seating is close to the ground, making for a bit of that Middle-Eastern quality that is so popular with ‘neo-lounge’, and avoiding any sightlines projecting from the central ‘cabana’ (that is where the bar is, spanning both upper and lower levels of the roof terrace). The bar is fitted into this semi-enclosed area with only one solid back side, and 2 edges where metal industrial doors rise up during business hours. The bi-partite cabana connects this space, past glazing with ‘Emmental-cheese’ round openings, to a roofed pool-side seating area in the upper roof level. Yes there is a lap-pool, some 5 feet up, beautifully illuminated at night and with an ‘infinity edge’ that projects everything westwards, up 6th Street. Sandwiched in the middle of the building, there are actually rooms. Yes, this is a hotel; not a night

Pool seen in the ceiling reflection.

Party projections across the street.

club, although, even in the rooms, the difference is blurred. I visited one of the ‘Wow’ suites, and found it to be quite congenial. At one end of the room, a built-in slab transforms readily into no-host bar. The large bed, on a platform, and adjacent L-shaped sofa, simply beckon for groups of people to hang out. The open plan imposes itself to simultaneously promote anti-density, exhibitionistic fun, and a look to that nostalgic model of the hotel room with a period bath tub in the middle, adjacent to some pair of wooden doors that swing out to a balcony and vistas of the Venetian canals beyond. Not many canals around here, but the diagram certainly persists. The length of the room aims at the large windows that project the entire space onto the city-scape. And, inside, all walls have been removed (you know, those 2 that delimit the always-obvious massing of hotel-room baths), and so the space flows, over the bed, past the ‘living’ space, and making quite a splash through the bathtub and the rest of a continuous field of mini-mosaics. Only the toilet remains privatized behind a sliding door, for even the closets play hide-and-seek with their translucent curtains.

Directional suite: towards the vistas [and ‘bar’].

The ‘foot’ of the closet curtains.