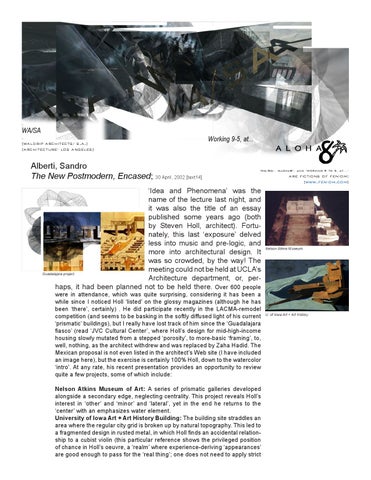 ‘Idea and Phenomena’ was the name of the lecture last night, and it was also the title of an essay published some years ago (both by Steven Holl, architect). Fortunately, this last ‘exposure’ delved less into music and pre-logic, and more into architectural design. It was so crowded, by the way! The meeting could not be held at UCLA’s Guadalajara project. Architecture department, or, perhaps, it had been planned not to be held there. Over 600 people were in attendance, which was quite surprising, considering it has been a while since I noticed Holl ‘listed’ on the glossy magazines (although he has been ‘there’, certainly) . He did participate recently in the LACMA-remodel competition (and seems to be basking in the softly diffused light of his current ‘prismatic’ buildings), but I really have lost track of him since the ‘Guadalajara fiasco’ (read ‘JVC Cultural Center’, where Holl’s design for mid-high-income housing slowly mutated from a stepped ‘porosity’, to more-basic ‘framing’, to, well, nothing, as the architect withdrew and was replaced by Zaha Hadid. The Mexican proposal is not even listed in the architect’s Web site (I have included an image here), but the exercise is certainly 100% Holl, down to the watercolor ‘intro’. At any rate, his recent presentation provides an opportunity to review quite a few projects, some of which include:

Nelson Atkins Museum of Art: A series of prismatic galleries developed alongside a secondary edge, neglecting centrality. This project reveals Holl’s interest in ‘other’ and ‘minor’ and ‘lateral’, yet in the end he returns to the ‘center’ with an emphasizes water element. University of Iowa Art + Art History Building: The building site straddles an area where the regular city grid is broken up by natural topography. This led to a fragmented design in rusted metal, in which Holl finds an accidental relationship to a cubist violin (this particular reference shows the privileged position of chance in Holl’s oeuvre, a ‘realm’ where experience-deriving ‘appearances’ are good enough to pass for the ‘real thing’; one does not need to apply strict

Cubist methodology in order to yield something that provides quite the same ‘feeling’; however, it is disconcerting to see, as noted in several projects below, that the architectural language continues to resort to classical frameworks; works that cannot bear to be represented beyond unilateral ‘watercolor visions’). MIT Student Housing: The architect’s latest experiment in porosity. The building exemplifies a sponge. Sponges are exalted (what a surprising richness of cross-patterns they reveal!). And the ‘lessons learned’ begin to be applied to this new building. Irregular light wells penetrate the volume, like the negative gaps found in the texture of sponges. But the building is a grid, and the multiple and slight (‘sponge-like’) apertures at the façade scale down to the classical 9-square grid. Sarphatistraat Offices: This fragmented block looks a bit irregular (and maybe even ‘clumsy’) from the outside, but the interior contrasts with its clean finishes. It is the exterior roughness that begins, feebly, Holl’s need to resort to classical volumes such as cubes. The interior keeps it all together, however, and the whole becomes encased in a grid. Helsinki’s Museum of Contemporary Art: Well known and visited, the structure becomes a light-catcher in this city where the altitude angle of the sun never exceeds 51 degrees. Interestingly, all artificial light, for evening use, duplicates the effects and directionality of daylight. Chapel of St. Ignatius: A play of colors evolves as the sun crosses the sky. Not al of it is planned, as the architect admits, yet the effect (of course, ungraspable) is quite poetic, although the number of prismatic volumes (a strict 7, for the days of the week) is too rigorous. Texas Stretto House: An example of a ‘good-sized’ project with an even better client. Inspired by a series of dams and waterfalls in the midst of natural topography, Steven Holl manages to bring the irregularity of nature into the architectural realm. The stepped fragmentation (and even the sinking of one pavilion into a pond) does little to remove the structural rigidity. Burgos Museum of Human Evolution: The crux of the matter, in a sense. One of the original European pilgrimage caves, a place full of phenomenon and idea. Holl decides to digitize the form of the original cave, removing it and placing it over a reflective surface. The resulting form almost reminds me of Dagmar Richter’s Millennium Time-Capsule sculpture (although that one, formless, managed to feed on a cube, whereas Holl falls back onto the need to fit [form] a reformed in-form within an orthogonal [albeit fragmented] frame). There were also ‘private tidbits’ to be discovered: 1. The firm engages in some 10 competitions annually and wins only 1 in 20. 2. Steven Holl finds that the idea firm size is of about 10 people, providing an opportunity for intensity before reaching levels of ‘extreme management’. But you always need ideal clients. 3. It is important to involve clients with creative ideas in the beginning.

4. Thanks to technology, man is now able to manipulate ‘bigness’; building blocks can be as big as walls. Discussing Steven Holl and his work amongst friends, I’ve discovered that no particular ‘style’ seems to be attributed to him, although his body of work seems quite coherent. His emphasis does seem to be methodological (he searches out contemporary ‘deformations’, proceeding to encase these within age-old symbols, frames, and ‘extrema’), but he does present a formal tendency as well (his work works with fragmentation of form and the diffusion of vision and light). His production would seem to be based on the ideal newpostmodern, focusing on a personal narrative of place. Even more precisely: (vision + lightcolor)- ‘isms’/ clients (genius loci)2 - fiction

Presentation of 'Idea and Phenomena', by Stephen Holl. A review of various projects.

Presentation of 'Idea and Phenomena', by Stephen Holl. A review of various projects.