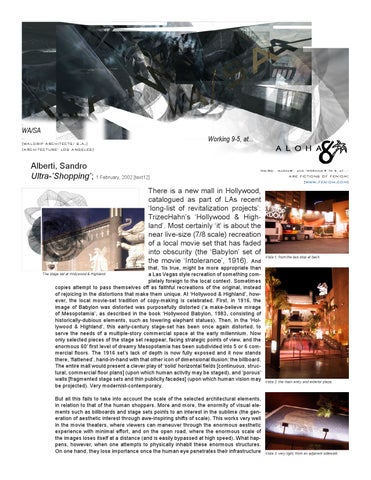 There is a new mall in Hollywood, catalogued as part of LAs recent ‘long-list of revitalization projects’: TrizecHahn’s ‘Hollywood & Highland’. Most certainly ‘it’ is about the near live-size (7/8 scale) recreation of a local movie set that has faded into obscurity (the ‘Babylon’ set of the movie ‘Intolerance’, 1916). And

that, ‘tis true, might be more appropriate than a Las Vegas style recreation of something completely foreign to the local context. Sometimes copies attempt to pass themselves off as faithful recreations of the original, instead of rejoicing in the distortions that make them unique. At ‘Hollywood & Highland’, however, the local movie-set tradition of copy-making is celebrated. First, in 1916, the image of Babylon was distorted was purposefully distorted (‘a make-believe mirage of Mesopotamia’, as described in the book ‘Hollywood Babylon, 1983, consisting of historically-dubious elements, such as towering elephant statues). Then, in the ‘Hollywood & Highland’, this early-century stage-set has been once again distorted, to serve the needs of a multiple-story commercial space at the early millennium. Now only selected pieces of the stage set reappear, facing strategic points of view, and the enormous 60’ first level of dreamy Mesopotamia has been subdivided into 5 or 6 commercial floors. The 1916 set’s lack of depth is now fully exposed and it now stands there, ‘flattened’, hand-in-hand with that other icon of dimensional illusion: the billboard. The entire mall would present a clever play of ‘solid’ horizontal fields [continuous, structural, commercial floor plans] (upon which human activity may be staged), and ‘porous’ walls [fragmented stage sets and thin publicity facades] (upon which human vision may be projected). Very modernist-contemporary.

Vista 1; from the bus stop at back.

The stage set at Hollywood & Highland.

But all this fails to take into account the scale of the selected architectural elements, in relation to that of the human shoppers. More and more, the enormity of visual elements such as billboards and stage sets points to an interest in the sublime (the generation of aesthetic interest through awe-inspiring shifts of scale). This works very well in the movie theaters, where viewers can maneuver through the enormous aesthetic experience with minimal effort, and on the open road, where the enormous scale of the images loses itself at a distance (and is easily bypassed at high speed). What happens, however, when one attempts to physically inhabit these enormous structures. On one hand, they lose importance once the human eye penetrates their infrastructure

(flat sets and boards are made to be observed from the outside, from a distance). Thus vast open spaces must be allocated for viewing the facades. And thus, vast amounts of commercial space are lost to parks and fields from which the facades may be observed. Simultaneously, the enormous scale contributes to the possibility (necessity) of vertical infill, and that is where the ‘recuperated’ commercial space goes, floor on top of floor on top of floor. But shoppers of the millennium are used to sitting comfortably while flying over ancient Mesopotamia, or swooping in front of the latest Bijan/Apple ad. At Hollywood & Highland, t emptiness and inaccessibility of the top floors reflects this basic fact. Vista 4: grand moves appreciated best from afar.

Have we necessarily lost the sublime to the virtual realm? It might be that we need to rethink the particular relationship between inside and outside at an enormous scale. Maybe in a situation such as that of Hollywood & Highland, 2 or 3 commercial floors could have comfortably spanned the horizontality of the site, with carefully designed openings (Zen openings, Barragan openings, etc.) to permit observation of the enormous facades beyond. Maybe smaller interior details are produced for the enjoyment of localized users, while the enormous exteriors cater completely to passers-by. It might be that the least-known and most-criticized projects might yield the best answers in regards to this issue. Recently, in a Mexican city known as Guadalajara, a sculptor was commissioned to produce a new symbol for the city. As many of the urban monuments of the city’s past (and of direct precedents such as Washington DC and Paris), this one would be situated at an intersection of various lineal boulevards. The issue of monumental scale is one that should not be lost to many locals in that city, as such urban monuments have always struggled with a certain ‘duality’ (they must be large enough to be observed from afar, directing attention to the intersection, the ‘point of arrival’; but they must also become small, in order to engage with all those viewers who have already ‘arrived’ at the intersection). Traditionally, this has been addressed by producing a smaller sculpture at the base of the larger monument (arriving on Mariano Otero, one perceives the monolithic statue of the motherland from afar; upon arriving at the intersection, one is treated to a metal-panel sculpture of Mexico’s Child Heroes). This is clumsy at best, and the sculptor in question has moved beyond symbols in order to produce a good example of shifting-scale monumentality, shaped as a series of enormous half-circles described as ‘arches’ in order to please the conservative populace. The enormous shapes are certainly perceived from afar. However, an ‘inherent’ detail becomes more obvious as one approaches these shapes: they are torqued; twisted along their curving length. And so, when one finally arrives and their overall vision is replaced by scattered fragments, these, ‘twisted’, in relation to the viewer’s movement in between them, become ‘twisting’ and dynamic. Throughout the process of the viewer’s movement, the monument manages to transform, smoothly, from image to motion. Just one of many possibilities. I wonder what one might derive from an elephant in motion?

For less theory and more shopping, visit: www.hollywoodandhighland.com Vista 6: an attempt at views from the interior.

Vista 7: from a parking lot.

Icon 1: The Chinese Theater forms part of the mall. Floor plan; most of the mall is actually interiorized.

The mall interweaves through the stage set.

Typical interior of the mall.

Arches in motion. Arches of the 3rd Millennium, Guadalajara.

Elephant in motion; notice the trunk.

About representation at the 'Hollywood and Highland' mall.

About representation at the 'Hollywood and Highland' mall.