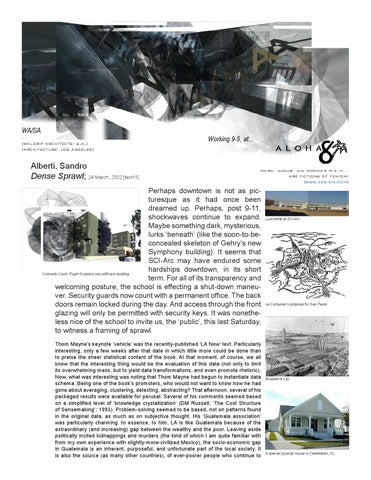 Perhaps downtown is not as picturesque as it had once been dreamed up. Perhaps, post 9-11, shockwaves continue to expand. Maybe something dark, mysterious, lurks ‘beneath’ (like the soon-to-beconcealed skeleton of Gehry’s new Symphony building). It seems that SCI-Arc may have endured some hardships downtown, in its short Colorado Court, Pugh+Scarpa’s very-efficient building. term. For all of its transparency and welcoming posture, the school is effecting a shut-down maneuver. Security guards now count with a permanent office. The back doors remain locked during the day. And access through the front glazing will only be permitted with security keys. It was nonetheless nice of the school to invite us, the ‘public’, this last Saturday, to witness a framing of sprawl. Thom Mayne’s keynote ‘vehicle’ was the recently-published ‘LA Now’ text. Particularly interesting, only a few weeks after that date in which little more could be done than to praise the sheer statistical content of the book. At that moment, of course, we all knew that the interesting thing would be the evaluation of this data (not only to limit its overwhelming mass, but to yield data transformations, and even promote rhetoric). Now, what was interesting was noting that Thom Mayne had begun to instantiate data schema. Being one of the book’s promoters, who would not want to know how he had gone about averaging, clustering, detecting, abstracting? That afternoon, several of his packaged results were available for perusal. Several of his comments seemed based on a simplified level of ‘knowledge crystallization’ (DM Russell; ‘The Cost Structure of Sensemaking’; 1993). Problem-solving seemed to be based, not on patterns found in the original data, as much as on subjective thought. His ‘Guatemala association’ was particularly charming. In essence, to him, LA is like Guatemala because of the extraordinary (and increasing) gap between the wealthy and the poor. Leaving aside politically incited kidnappings and murders (the kind of which I am quite familiar with from my own experience with slightly-more-civilized Mexico), the socio-economic gap in Guatemala is an inherent, purposeful, and unfortunate part of the local society. It is also the source (as many other countries), of ever-poorer people who continue to

arrive in LA, where they soon will be able to improve their lifestyle (much as those who are ‘terribly wealthy’ in Los Angeles already have). Thom Mayne, might counter, as he did at this aforementioned keynote speech, that “the specificity is not important; that is ludicrous!” So much for the consideration that, often, raw data contains errors or missing values that must addressed before the data can be visualized. The keynote speech was followed by a presentation of socio-political-urbanist views of the problematics of sprawl and density in Los Angeles. Everyone seemed to agree on the fact that LA is reaching the end of sprawl (as it is reaching natural boundaries that no longer allow it to ‘sprawl’). The solution, as expressed by Julie Eizenberg some time ago in a housing forum, is to embrace housing density. Joan Ling (Executive Director of the Community Corporation of Santa Monica) emphasized that “even if you don’t build it, they will come”. Citing the exemplary case of Huntington Park, where, even though housing density retains a ‘lightness’ typical of LA (one half that of NY), population density is approaching that of New York. She also refreshed 2 terms used to describe her adversaries: MIMBYs (Not In My Back Yard) and BANANAs (Build Absolutely Nothing Anywhere Near Anyone). That was brief but fun. I find that my personal doubts focus on capacity limits. For example, how far away from the limit of sprawl are we, really? It seems that people are driving, as Dana Cuff cleverly put it, “from Palm Springs, adjoining”. They are, and it’s no joke. People are developing lifestyles centered around commute lifestyles (conducting business on cell phones, listening to audio tapes, and even performing more complex tasks during stop-and-go traffic conditions). And technology continue to provide tools to assist a commuting lifestyle (are they still very far away, the ‘smart cars’ that will transport us effortlessly on ‘smart freeways’?). Another question, regarding the limits of population density: Isn’t there a limit to the number of people that can sleep in one room? Will all excess overflow necessarily spill out into the homeless scene, unstoppable? Beyond any doubts, if we agree to consider the proposals for increased housing density, here are 7 policy recommendations proposed by Ms. Ling: · Apply residential overlays in light-industrial zones. · Increase residential density along commercial corridors. · Further increase residential density at bus-line hubs and rail stations. · Switch residential density measurement from units/acre to floor-area-ratio. · Reduce construction costs by reducing parking requirements at bus hubs and rail stations. · Promote affordable housing by inclusionary housing (a % of units set aside for limitedincome rental). · Promote affordable housing by providing a local density bonus and height bonus based on affordability levels. Jane Blumenfeld (LA City Planning) spoke next. At that point she was described as a person who was willing to work with architects on building issues. She saw most problems outside of city hall, in the public realm, where money and politics prevented anything from being done; the City already allows more density than people tend to request; the City is proposing new relaxed policies (35% density bonus for projects near transportation hubs, possible elimination of outdated calculation units, and a 200% increase in floor area limits relative to lot area). The proposals seem good, yet it is unfortunate that she was only able to densify obfuscation in response to any voiced concerns. Like an automaton, she would emit only a standard reply: that the City is good; that any particular request had already been addressed in another place, at another time. Following, Angie Brooks-Scarpa sort of presented her point of view, in the midst of a case study presentation, a recent design of hers, soon to be

inaugurated, for a 44-single-resident structure near the 3rd Street Promenade. Not only is the building dense, but it is well designed, and energy-efficient as well. Solar panels, employed vertically and horizontally lend an aesthetic component and make the building 100% energy-independent. Regarding her perception of the matter, she mentioned that there are US cities that have managed to densify vertically and improve public transportation, primarily by marketing housing density in a positive light. She agreed that LA sprawl has reached its limits, and made the important point that “densification and improved quality of life are not mutually exclusive.” She also hoped that City Hall, as keeper of vast amount of data, would be able to develop interesting syntheses that could prove useful to design professionals (here goes the LA-Now factor once again…). After a lengthy lunch break, during which the hundreds of visitors were allowed to meander across “the urban desert of empty lots, rubble, and contorted chain link fences” in search of any nearlyabandoned café, Professor Dana Cuff peaked interest with one of her performance lectures: ‘Dreams of Home: The End of Utopia’. First, the classical utopias began to unfold, connected by reaction to industrialization. Over the years, people had been led by the pendulum swing, from ordered societies such as those proposed by Le Corbusier, to paradisiacal (since they were anti-industrial) cases such as Frank Lloyd Wright’s Broadacre City, where humans would reconnect to the earth. Post WWII, the idea of utopia shifted to one where higher density, certain technological dependency, and a focus on leisure, would pervade. This is the case of Seaside, as well as the more corporate (Disney’s) Celebration. These examples reflect fears of current urban complexity. Here, even politics are avoided (the owning company controls all). These examples, coupled with particular world views (identitopias), have been mutated in new communities such as Harmony, FL, where animal rights pervade, or Agarotopia, AZ, where everybody is ‘rural’. The architecture of these places, unfortunately, does not change much. The next hour was dedicated to several brief presentations (case studies of sorts). Michael Bell presented projects from a 1998 project on affordable single-family housing (‘16 Houses’). He both curated the exhibit and participated with a project of his own: a sleek ‘un-private’ house known as the ‘Glass House @ 2°’ (exactly the opposite of what one would expect to find in a high-crime urban area). It was an interesting and positive argument for the possibility of choice to people of all incomes. It was also interesting how far architecture could be ‘pushed’ by a practitioner, beyond form and use, into the realms of social assistance and economics. And let us not forget the fact that we are still fighting to get mid-century modernism built. Data was on everybody’s mind. Robert Somol dealt with it in an emphasized quote: “There are liars, damned liars, and then there are statisticians”. Even ‘poetic’ Mark Mack (who has been known to refer to rapid prototyping technology as ‘weaving machines’) could not escape the allure, presenting many more ratios and proportions than he usually would. His architectural presentation included typical ‘Mackish’ examples. Marcelo Spina, already having collaborated on interesting projects with Sebastian Khourian (an infrastructure project in Buenos Aires, followed by restaurants-terraces-hospitality in El Retiro), presents a multi-unit project in Rosario. A nice project taking façade and floors as one unified set of folds, all held in check by 2 lateral walls.

Best for last, from a text co-produced with Mary-Ann Ray, Roger Sherman proposed a methodology for architects to market building density to their clients (I need to get the title of that booklet). Examples include cooption and resistance: Cooption: Density can be presented in such a way that it is combined with a ‘package’ of positive factors. Resistance: Density can be achieved through the manipulation of perception (perhaps in the way density is distributed, or by recovering under-utilized space that is there anyway [under stairs, in side yards, between ceilings and floors, etc.], or temporally [using space when it normally is left unused, after-hours, etc.], or including expanded sightlines [although the physical space might be reduced], or by using visual ‘tricks’ [such as translucent surfaces, which make it seem as if the space beyond is large, although it might be quite small]).