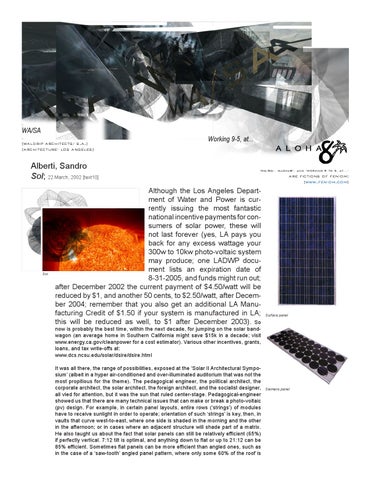 Although the Los Angeles Department of Water and Power is currently issuing the most fantastic national incentive payments for consumers of solar power, these will not last forever (yes, LA pays you back for any excess wattage your 300w to 10kw photo-voltaic system may produce; one LADWP document lists an expiration date of 8-31-2005, and funds might run out; after December 2002 the current payment of $4.50/watt will be reduced by $1, and another 50 cents, to $2.50/watt, after December 2004; remember that you also get an additional LA Manufacturing Credit of $1.50 if your system is manufactured in LA; this will be reduced as well, to $1 after December 2003). So

now is probably the best time, within the next decade, for jumping on the solar bandwagon (an average home in Southern California might save $15k in a decade; visit www.energy.ca.gov/cleanpower for a cost estimator). Various other incentives, grants, loans, and tax write-offs at: www.dcs.ncsu.edu/solar/dsire/dsire.html It was all there, the range of possibilities, exposed at the ‘Solar II Architectural Symposium’ (albeit in a hyper air-conditioned and over-illuminated auditorium that was not the most propitious for the theme). The pedagogical engineer, the political architect, the corporate architect, the solar architect, the foreign architect, and the socialist designer, all vied for attention, but it was the sun that ruled center-stage. Pedagogical-engineer showed us that there are many technical issues that can make or break a photo-voltaic (pv) design. For example, in certain panel layouts, entire rows (‘strings’) of modules have to receive sunlight in order to operate; orientation of such ‘strings’ is key, then, in vaults that curve west-to-east, where one side is shaded in the morning and the other in the afternoon; or in cases where an adjacent structure will shade part of a matrix. He also taught us about the fact that solar panels can still be relatively efficient (65%) if perfectly vertical. 7:12 tilt is optimal, and anything down to flat or up to 21:12 can be 85% efficient. Sometimes flat panels can be more efficient than angled ones, such as in the case of a ‘saw-tooth’ angled panel pattern, where only some 60% of the roof is

covered in panels (due to the shadow each panel cast to the north), as opposed to covering the entire roof with flat panels. Oh, and all the governing rules for solar-energy systems, he also told us about those: NEC Article 690 (general system codes) UBC + local codes (every architectural element that can possibly be affected by pv systems) UL Standard 1703 (electrical-safety standard) California Rule 21 (inter-connection requirements to guarantee the safety of utility companies) IEEE 929-2000 (recommended practice) UL Standard 1741 (standard for electronic components of systems) Political-architect showed us every possible project ever designed for the Smithsonian Institution, which, she was quick to point out, is not very interested in solar energy. Corporate-architect was there to show off his winning design for the Washington DC Solar Wall competition. A grand project, over-priced, self-same, and hyper-digitally-designed. Enormous tensile members would pull down diagonally, creating a hanging façade and an interstitial space for exhibits. Gaps between the cables would be covered in the latest semi-transparent cell modules, as well as evacuated-tube technology at top. This façade would be left semi-open, with 3” to 6” gaps throughout. At front a vast water pool would present jets of water, powered by the solar panels. The water also would cool incoming air on its way under a larger gap at the bottom of the hanging wall (stack effect would release the heat up above. The modular ‘grasps’ of the modules would allow for outdated panels to be replaced with new technology. Foreign-architect had the worst charts I have ever seen in my life; their convoluted format and coloring did little to inform, and some were missing crucial labels. But the point was made by the speaker: “the end of the world is coming” (or something like that), and “I only accept clients who want energy-efficient designs”. In parting, foreign-architect also warned that, in the past, careless design has led to the accumulation of air moisture in ceilings of highly-insulated buildings, which has led to their collapse and death of people (I still don’t know if the point was to design more carefully or not to design at all; as I type this I find myself waiting for my ceiling to collapse; it looks pretty smooth… right now; I wonder how much it weighs). Socialist designer had built-in anti-big-business subliminal slides into his presentation. His was a cute tour of the very-well-established use of these technologies during the past few decades (a useful tip, as well: dirt and grime on solar panels does not reduce their efficiency as much as one would think; a panel that seems about 50% ‘obscured’ will still output at 85% efficiency, due to the fact that the dirt actually magnifies sunlight at certain angles). Solar-energy systems come in 2 basic formats: · utility-tie (this provides power in conjunction to regular utility power; you always have power from one or the other, and extra power to sell to your local power company, paying back initial outlay costs; costs about $20k to power a home). · utility-tie with backup (this costs more, but also allows for having a powered battery you can use in case your geographical location suffers from blackouts; these can cost $40k or more to power a home; note that photo-voltaic systems can be financed through a 10-year Fannie Mae loan, if the system is installed by an approved contractor). The use of solar-energy systems is chic (seen in Architecture, Architectural Record, and much ‘star architecture’ over the past few years), avant-garde (eternally associated with sci-fi shows where humans of the future interact with bio-architecture), independent (usable in remote locations), profit-

able (save on electricity and even get paid money for it), and environmentally conscious (these systems do not pollute or require any impacting infrastructure).

It’s great that current homeowners can simply have solar systems slapped onto their roofs and begin to save their wallets and the world. However, architects, in considering these systems, would do well to incorporate them into their initial design stages. The results can be fabulous, as was shown by both solar-architect and our host, the LADWP. Solar-architect showed 3 carrousels full of slides, of which several projects should simply be avoided, but so many images are just… dreamy: Temple-Duco Fitness Center [Fall 2002] Will feature a 5kw transparent glass photovoltaic skylight canopy. Solar Trees at the LA Zoo Solar Trees at the California Science Center [Summer 2003] Fragmented and curved flows shade visitors at parking lots, providing 400kw to 1 megawatt of power. LADWP Photovoltaic Parking Lot [LADWP Solar Design Group; Fall 1999] Like the ‘trees’ above, here an array of cells provide shade and energy (150kw). The design could have been a bit less chunky, were it not for old California laws that require extra reinforcement against possible tornado winds.

Hollywood Gardens [Spring 2001] The pv corner sculpture defines the perimeter of a new community garden. The panels provide 2.5kw for a small classroom. Gratt’s High School [future] Here the solar installation is the school façade, which provides thermal insulation, shading, and a new aesthetic language, apart from 75 kw in energy.

Interfaith Church Chapels [Summer 2002] Images of ‘angels’, ‘butterflies’, and even ‘gargoyles’ in one single abstract ‘solar angel’ sculptural element that can be attached to any building. Its ‘wings’ are the 200w flexible solar panels. Washington DC Solar Wall [competition concept] This idea shows that solar panels could become much more fabric-like. Currently, if we simply evaluate the basic material, the photovoltaic module, entire-surface modules seem much more appealing than the cell-arrangement modules provided by the likes of Siemens (the

first type is more universal, since it presents itself as a smooth material surface, while the present very particular patterns, subject to very particular appreciation). But more choices are coming out, already used by a few avant-garde designers: Colored ranges of cells. Particular cell or micro-wire patterns on the faces of modules. More transparent cells. Totally transparent glass that acts as a solar system. Flexible modules Solar roof shingles Photo-voltaic louvers

Bad design 1: all strings are shaded in the morning

Bad design 2: all strings are shaded at various times of day