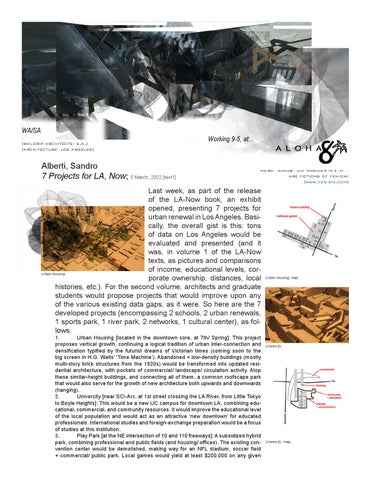 Last week, as part of the release of the LA-Now book, an exhibit opened, presenting 7 projects for urban renewal in Los Angeles. Basically, the overall gist is this: tons of data on Los Angeles would be evaluated and presented (and it was, in volume 1 of the LA-Now texts, as pictures and comparisons of income, educational levels, corUrban housing. porate ownership, distances, local histories, etc.). For the second volume, architects and graduate students would propose projects that would improve upon any of the various existing data gaps, as it were. So here are the 7 developed projects (encompassing 2 schools, 2 urban renewals, 1 sports park, 1 river park, 2 networks, 1 cultural center), as follows:

1. Urban Housing [located in the downtown core, at 7th/ Spring]: This project proposes vertical growth, continuing a logical tradition of urban inter-connection and densification typified by the futurist dreams of Victorian times (coming soon to the big screen in H.G. Wells’ ‘Time Machine’). Abandoned + low-density buildings (mostly multi-story brick structures from the 1920s) would be transformed into updated residential architecture, with pockets of commercial/ landscape/ circulation activity. Atop these similar-height buildings, and connecting all of them, a common roofscape park that would also serve for the growth of new architecture both upwards and downwards (hanging). 2. Univercity [near SCI-Arc, at 1st street crossing the LA River, from Little Tokyo to Boyle Heights]: This would be a new UC campus for downtown LA, combining educational, commercial, and community resources. It would improve the educational level of the local population and would act as an attractive ‘new downtown’ for educated professionals. International studies and foreign-exchange preparation would be a focus of studies at this institution. 3. Play Park [at the NE intersection of 10 and 110 freeways]: A subsidized hybrid park, combining professional and public fields (and housing/ offices). The existing convention center would be demolished, making way for an NFL stadium, soccer field + commercial/ public park. Local games would yield at least $200,000 on any given

weekend. The overall scheme would also ‘prepare’ the city for the possibility of hosting the upcoming 2012 Olympic Summer Games. 4. LA Riverpark [LA River between 10 and 101 freeways, and northwards]: Due to Propositions 12 and 13 (from the year 2000), some $83 million are now ready for LA-River development. Under this proposal, parts of the river would be made more porous (removing concrete walls and/or bottoms), or widened (adding drainage basins on banks), with adjacent park areas and improved recreational parks, and industrial zones would be relocated into planned industrial parks (with common roofscape parks that would interconnect buildings, capture/ store rainwater, act as acoustic barriers, and cool down temperatures; a housing park is also planed along similar lines). 5. Redline School [along the metro ‘red line’]: In a new ‘school’ infrastructure, mobility, and access replace geography. Existing school districts along the metro line would be transformed into ‘campuses’ of a unified school plan. Each metro station would be transformed into an ‘educational gateway’ containing stationary components (homerooms, faculty offices, one core subject, storage). In between stations, resource centers, research, and recreation. Students would commute 3 times/ day across this enormous lineal ‘school’. Local civic identities could be incorporated (i.e. the Little Tokyo station could offer Japanese studies). New campuses would be formed based on proximity to subway entrances. Ultimately, the school district could strategically distribute resources based on real-estate prices. 6. Re:LAX [LAX to downtown LA]: LAX and downtown LA would be connected via a monorail system. Also, downtown would be reconnected, across the 110 freeway, through a new urban structure that includes weaving pedestrian paths and a loose constituency of programs hovering above the freeway. 7. HS[aRT] Network [an improved transportation web centering downtown]: Cultural institutions would be added to transit stations. Connections to existing cultural institutions would be improved. All this, part of a fresh transportation web that would center on a new downtown convention center (a $2.5 million cultural/ financial/ transportation hub straddling the LA River).