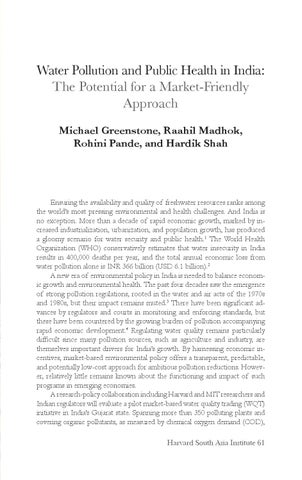 Ensuring the availability and quality of freshwater resources ranks among the worldâ&#x20AC;&#x2122;s most pressing environmental and health challenges. And India is no exception. More than a decade of rapid economic growth, marked by increased industrialization, urbanization, and population growth, has produced a gloomy scenario for water security and public health.1 The World Health Organization (WHO) conservatively estimates that water insecurity in India results in 400,000 deaths per year, and the total annual economic loss from water pollution alone is INR 366 billion (USD 6.1 billion).2 A new era of environmental policy in India is needed to balance economic growth and environmental health. The past four decades saw the emergence of strong pollution regulations, rooted in the water and air acts of the 1970s and 1980s, but their impact remains muted.3 There have been significant advances by regulators and courts in monitoring and enforcing standards, but these have been countered by the growing burden of pollution accompanying rapid economic development.4 Regulating water quality remains particularly difficult since many pollution sources, such as agriculture and industry, are themselves important drivers for Indiaâ&#x20AC;&#x2122;s growth. By harnessing economic incentives, market-based environmental policy offers a transparent, predictable, and potentially low-cost approach for ambitious pollution reductions. However, relatively little remains known about the functioning and impact of such programs in emerging economies. A research-policy collaboration including Harvard and MIT researchers and Indian regulators will evaluate a pilot market-based water quality trading (WQT) initiative in Indiaâ&#x20AC;&#x2122;s Gujarat state. Spanning more than 350 polluting plants and covering organic pollutants, as measured by chemical oxygen demand (COD), Harvard South Asia Institute 61 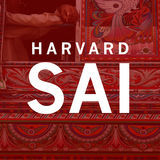