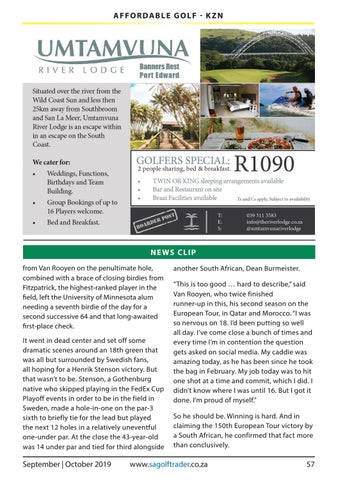 NE WS CLIP from Van Rooyen on the penultimate hole, combined with a brace of closing birdies from Fitzpatrick, the highest-ranked player in the field, left the University of Minnesota alum needing a seventh birdie of the day for a second successive 64 and that long-awaited first-place check. It went in dead center and set off some dramatic scenes around an 18th green that was all but surrounded by Swedish fans, all hoping for a Henrik Stenson victory. But that wasn’t to be. Stenson, a Gothenburg native who skipped playing in the FedEx Cup Playoff events in order to be in the field in Sweden, made a hole-in-one on the par-3 sixth to briefly tie for the lead but played the next 12 holes in a relatively uneventful one-under par. At the close the 43-year-old was 14 under par and tied for third alongside

another South African, Dean Burmeister. “This is too good … hard to describe,” said Van Rooyen, who twice finished runner-up in this, his second season on the European Tour, in Qatar and Morocco. “I was so nervous on 18. I’d been putting so well all day. I’ve come close a bunch of times and every time I’m in contention the question gets asked on social media. My caddie was amazing today, as he has been since he took the bag in February. My job today was to hit one shot at a time and commit, which I did. I didn’t know where I was until 16. But I got it done. I’m proud of myself.” So he should be. Winning is hard. And in claiming the 150th European Tour victory by a South African, he confirmed that fact more than conclusively.