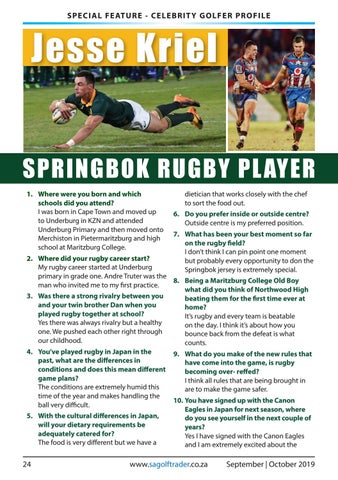 Springbok rugby pl ayer 1. Where were you born and which schools did you attend? I was born in Cape Town and moved up to Underburg in KZN and attended Underburg Primary and then moved onto Merchiston in Pietermaritzburg and high school at Maritzburg College.

dietician that works closely with the chef to sort the food out. 6. Do you prefer inside or outside centre? Outside centre is my preferred position. 7. What has been your best moment so far on the rugby field? I don’t think I can pin point one moment but probably every opportunity to don the Springbok jersey is extremely special.

2. Where did your rugby career start? My rugby career started at Underburg primary in grade one. Andre Truter was the 8. Being a Maritzburg College Old Boy man who invited me to my first practice. what did you think of Northwood High 3. Was there a strong rivalry between you beating them for the first time ever at and your twin brother Dan when you home? played rugby together at school? It’s rugby and every team is beatable Yes there was always rivalry but a healthy on the day. I think it’s about how you one. We pushed each other right through bounce back from the defeat is what our childhood. counts. 4. You’ve played rugby in Japan in the 9. What do you make of the new rules that past, what are the differences in have come into the game, is rugby conditions and does this mean different becoming over- reffed? game plans? I think all rules that are being brought in The conditions are extremely humid this are to make the game safer. time of the year and makes handling the 10. You have signed up with the Canon ball very difficult. Eagles in Japan for next season, where 5. With the cultural differences in Japan, do you see yourself in the next couple of will your dietary requirements be years? adequately catered for? Yes I have signed with the Canon Eagles The food is very different but we have a and I am extremely excited about the 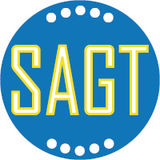