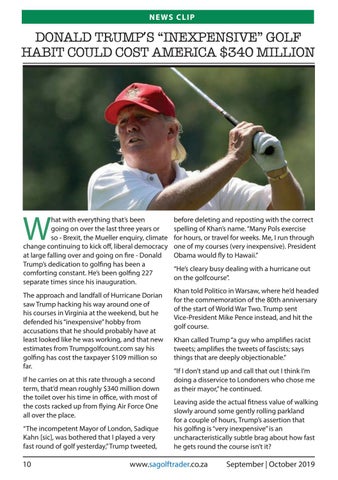 hat with everything that’s been going on over the last three years or so - Brexit, the Mueller enquiry, climate change continuing to kick off, liberal democracy at large falling over and going on fire - Donald Trump’s dedication to golfing has been a comforting constant. He’s been golfing 227 separate times since his inauguration. The approach and landfall of Hurricane Dorian saw Trump hacking his way around one of his courses in Virginia at the weekend, but he defended his “inexpensive” hobby from accusations that he should probably have at least looked like he was working, and that new estimates from Trumpgolfcount.com say his golfing has cost the taxpayer $109 million so far. If he carries on at this rate through a second term, that’d mean roughly $340 million down the toilet over his time in office, with most of the costs racked up from flying Air Force One all over the place. “The incompetent Mayor of London, Sadique Kahn [sic], was bothered that I played a very fast round of golf yesterday,” Trump tweeted,

before deleting and reposting with the correct spelling of Khan’s name. “Many Pols exercise for hours, or travel for weeks. Me, I run through one of my courses (very inexpensive). President Obama would fly to Hawaii.” “He’s cleary busy dealing with a hurricane out on the golfcourse”. Khan told Politico in Warsaw, where he’d headed for the commemoration of the 80th anniversary of the start of World War Two. Trump sent Vice-President Mike Pence instead, and hit the golf course. Khan called Trump “a guy who amplifies racist tweets; amplifies the tweets of fascists; says things that are deeply objectionable.” “If I don’t stand up and call that out I think I’m doing a disservice to Londoners who chose me as their mayor,” he continued. Leaving aside the actual fitness value of walking slowly around some gently rolling parkland for a couple of hours, Trump’s assertion that his golfing is “very inexpensive” is an uncharacteristically subtle brag about how fast he gets round the course isn’t it?