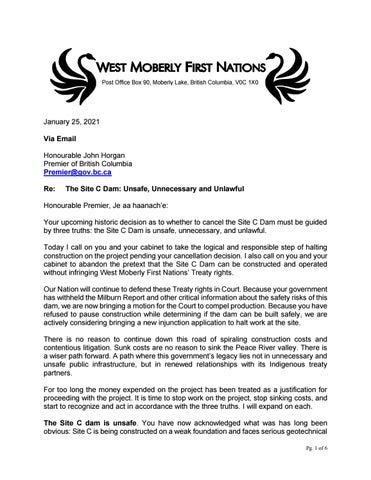 Honourable Premier, Je aa haanach’e: Your upcoming historic decision as to whether to cancel the Site C Dam must be guided by three truths: the Site C Dam is unsafe, unnecessary, and unlawful. Today I call on you and your cabinet to take the logical and responsible step of halting construction on the project pending your cancellation decision. I also call on you and your cabinet to abandon the pretext that the Site C Dam can be constructed and operated without infringing West Moberly First Nations’ Treaty rights. Our Nation will continue to defend these Treaty rights in Court. Because your government has withheld the Milburn Report and other critical information about the safety risks of this dam, we are now bringing a motion for the Court to compel production. Because you have refused to pause construction while determining if the dam can be built safely, we are actively considering bringing a new injunction application to halt work at the site. There is no reason to continue down this road of spiraling construction costs and contentious litigation. Sunk costs are no reason to sink the Peace River valley. There is a wiser path forward. A path where this government’s legacy lies not in unnecessary and unsafe public infrastructure, but in renewed relationships with its Indigenous treaty partners. For too long the money expended on the project has been treated as a justification for proceeding with the project. It is time to stop work on the project, stop sinking costs, and start to recognize and act in accordance with the three truths. I will expand on each. The Site C dam is unsafe. You have now acknowledged what was has long been obvious: Site C is being constructed on a weak foundation and faces serious geotechnical Pg. 1 of 6

problems. As the Mount Polley disaster reminds us all, dam failures can and do happen when underlying geotechnical issues go unaddressed. As the catastrophic St. Francis Dam disaster of 1928 demonstrates, underlying geological conditions can cause even massive dams to fail. Remnants of that dam remain strewn throughout the San Francisquito Canyon, the lasting legacy of a dam built on a weak foundation.

Remains of the St. Francis Dam in the Years Following the Disaster (Photo Credit Imveracity, CC BY-SA 4.0, via Wikimedia Commons).

The Site C dam is unnecessary. As was found by the British Columbia Utilities Commission, alternative energy sources such as wind, geothermal and industrial curtailment could provide similar benefits to ratepayers as the Site C project, with an equal or lower Unit Energy cost. Since the Utilities Commission made that determination in 2017, the costs of the Site C Dam have ballooned, while the cost of alternatives continues to fall. The Site C Dam is unlawful. Construction and operation of the dam will cause profound and immitigable violation of the rights of West Moberly set out in Treaty 8 and guaranteed by the Constitution. Treaty 8 is an agreement between Canada and the Indigenous Treaty partners that allows for the sharing of Treaty 8 land, including the ancestral territory of West Moberly. The Indigenous treaty partners agreed to share their home with settlers in exchange for the right to continue a traditional way of life, free from forced interference. West Moberly’s members have the right to hunt fish and trap throughout Treaty 8 lands. The Crown represented to its treaty partners that the agreement would last “as long as the river flows”. At the time of treaty it would have been incomprehensible that the agreement would later be argued to authorize the blockage of the Peace River with a series of three massive dams and sprawling reservoirs. Indeed, such hydroelectric damming did not exist anywhere in the world in 1899, when Treaty 8 was signed. Pg. 2 of 6

As an agreement to share ancestral lands, Treaty 8 granted the Crown the right to “take up” land from time to time for certain limited purposes. However, none of the agreed upon purposes include the large-scale destruction of land. Simply put, the Indigenous treaty partners would not, could not, and did not, agree to the destruction of their lands. To now suggest that this destruction is authorized by the Treaty is absurd. The destruction that Site C will cause is immense. 5,500 hectares of land will be flooded and forever alienated. Sacred sites will be plunged underwater and desecrated. Oral history will be lost. Precious medicines will be submerged and contaminated. Fish will be poisoned with methylmercury and become unsafe to eat. Threatened species will lose precious habitat. Old forests will be razed and fragile wetlands disrupted.

What is worse, such destruction will compound past and ongoing harms. West Moberly is still living with the damage wrought by the two other unlawful hydroelectric dams blocking portions of the Peace River upstream from Site C. Further, the Crown has authorized so much industrial development in West Moberly’s traditional territory that we will lose any prospect of meaningfully exercising treaty rights if Site C is completed. The violation caused by Site C of the sacred and constitutionally protected rights of West Moberly First Nations is not justified. An unnecessary and unsafe project cannot be a lawful reason to violate the rights of an Indigenous treaty partner.

West Moberly therefore demands that British Columbia immediately cease construction on Site C. It is fully prepared to go to court next year to prove the obvious: that construction and operation of Site C is a violation of its treaty rights. It will seek a court order requiring the removal and comprehensive remediation of the project, regardless of how much construction has occurred or what the cost may be. However, there is an alternative to continuous and contentious litigation. This government has admirably committed itself to the implementation of the United Nations Declaration on the Rights of Indigenous Peoples. It can now also live up to these obligations. UNDRIP is founded upon a recognition of the â&amp;#x20AC;&amp;#x153;urgent need to respect and promote the rights of Pg. 4 of 6

indigenous peoples affirmed in treaties” and a consideration that “treaties… and the relationship they represent, are the basis for a strengthened partnership between indigenous peoples and States”. UNDRIP commits to the obtaining of the “free, prior and informed consent” of Indigenous persons before “adopting and implementing legislative or administrative measures that may affect them”. Mr. Horgan, your government can protect the rights guaranteed by Treaty 8 and act in accordance with the commitments of UNDRIP. You can reject the madness of ploughing ahead with this unnecessary, unsafe, and unlawful project. You can choose instead to immediately suspend the project. You can work with West Moberly and other Indigenous treaty partners to provide truly clean energy alternatives that meet the needs of all British Columbians. You can show Canada and the world that the only way to escape our colonial history of neglect and betrayal is to act boldly and honourably in the decisions that lie before us today.

Chief Willson calls on Premier Horgan and his cabinet to suspend work on the Site C dam due to unresolved geotechnical problems with the dam's foundations and unresolved risks to public safety. The letter notifies the Premier that West Moberly is seeking a court order to compel safety reports to-date withheld from the public and West Moberly.