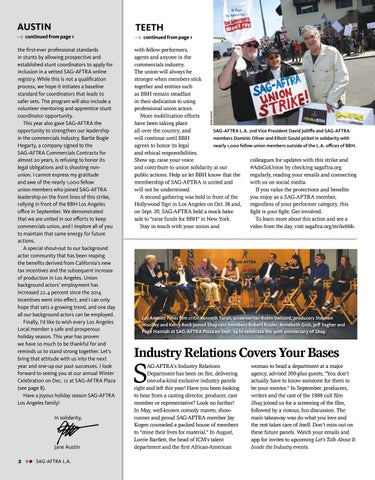 the first-ever professional standards in stunts by allowing prospective and established stunt coordinators to apply for inclusion in a vetted SAG-AFTRA online registry. While this is not a qualification process, we hope it initiates a baseline standard for coordinators that leads to safer sets. The program will also include a volunteer mentoring and apprentice stunt coordinator opportunity. This year also gave SAG-AFTRA the opportunity to strengthen our leadership in the commercials industry. Bartle Bogle Hegarty, a company signed to the SAG-AFTRA Commercials Contracts for almost 20 years, is refusing to honor its legal obligations and is shooting nonunion. I cannot express my gratitude and awe of the nearly 1,000 fellow union members who joined SAG-AFTRA leadership on the front lines of this strike, rallying in front of the BBH Los Angeles office in September. We demonstrated that we are united in our efforts to keep commercials union, and I implore all of you to maintain that same energy for future actions. A special shout-out to our background actor community that has been reaping the benefits derived from California’s new tax incentives and the subsequent increase of production in Los Angeles. Union background actors’ employment has increased 22.4 percent since the 2014 incentives went into effect, and I can only hope that sets a growing trend, and one day all our background actors can be employed. Finally, I’d like to wish every Los Angeles Local member a safe and prosperous holiday season. This year has proven we have so much to be thankful for and reminds us to stand strong together. Let’s bring that attitude with us into the next year and one-up our past successes. I look forward to seeing you at our annual Winter Celebration on Dec. 12 at SAG-AFTRA Plaza (see page 8). Have a joyous holiday season SAG-AFTRA Los Angeles family!

with fellow performers, agents and anyone in the commercials industry. The union will always be stronger when members stick together and entities such as BBH remain steadfast in their dedication to using professional union actors. More mobilization efforts have been taking place all over the country, and SAG-AFTRA L.A. 2nd Vice President David Jolliffe and SAG-AFTRA will continue until BBH members Dominic Oliver and Elliott Gould picket in solidarity with agrees to honor its legal nearly 1,000 fellow union members outside of the L.A. offices of BBH. and ethical responsibilities. Show up, raise your voice colleagues for updates with this strike and and contribute to union solidarity at our #AdsGoUnion by checking sagaftra.org public actions. Help us let BBH know that the regularly, reading your emails and connecting membership of SAG-AFTRA is united and with us on social media. will not be undermined. If you value the protections and benefits you enjoy as a SAG-AFTRA member, A second gathering was held in front of the regardless of your performer category, this Hollywood Sign in Los Angeles on Oct. 26 and, fight is your fight. Get involved. on Sept. 20, SAG-AFTRA held a mock bake sale to “raise funds for BBH” in New York. To learn more about this action and see a video from the day, visit sagaftra.org/strikebbh. Stay in touch with your union and

AG-AFTRA’s Industry Relations Department has been on fire, delivering one-of-a-kind exclusive industry panels right and left this year! Have you been looking to hear from a casting director, producer, cast member or representative? Look no further! In May, well-known comedy maven, showrunner and proud SAG-AFTRA member Jay Kogen counseled a packed house of members to “mine their lives for material.” In August, Lorrie Bartlett, the head of ICM’s talent department and the first African-American

woman to head a department at a major agency, advised 200-plus guests, “You don’t actually have to know someone for them to be your mentor.” In September, producers, writers and the cast of the 1989 cult film Shag joined us for a screening of the film, followed by a riotous, fun discussion. The main takeaway was do what you love and the rest takes care of itself. Don’t miss out on these future panels. Watch your emails and app for invites to upcoming Let’s Talk About It: Inside the Industry events.

The official newsletter of the SAG-AFTRA Los Angeles Local 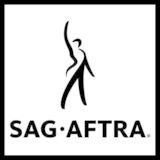