A CASE OF MISTAKEN IDENTITY - THE CARP TUGGER 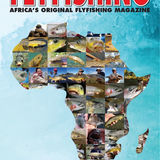 The Tugger originated after I returned from fishing for carp at Bronkhorstspruit Dam. I was frustrated because the wind blew my flies all over the show and didn’t allow me the opportunity to present my flies to the carp that were darting through the gaps in the grass - faster than Flash Gordon!

The gaps between the grass clumps were small and the spaces didn’t allow for much time to present a fly, so I had to come up with a plan. The only knowledge I had to refer to was that of the art lure guys. They were using curly tails and jigs to catch carp. I realised that a little weight would help with control and positioning the fly in tight and windy conditions. It would also allow me to place the fly quickly and accurately.

I was on the right track. I decided to use a strong, wide gape scud hook that I could really yank on to keep the carp from going into the weeds and reeds. The idea was to tug hard, lift the fish’s head and prevent it from swimming too far too quickly - hence the name “Tugger”.

The tungsten bead adds to the weight but also acts as an attractor hot spot for the carp to hone in on. It looks like an egg and carp love egg flies. The body was tapered to imitate a leach or caddis or the like and the profile alone would be enough to entice a carp. Lastly, the marabou tail thins in the water and allows for great movement, like a curly tail would. It is a great material as it adds colour and looks like a worm or some other tasty morsel that a carp would eat. A l l t h i s w a s l o o k e d a t w i t h t h e understanding of how a carp feeds and what it likes to eat. Carp can be very colour and size specific and this design allows for changes to size and colour when tying it. It also allows for hackle, legs, etc. to be add if required. The permutations are endless.

My original favourite colours were either a white, red or yellow tail with a black body and a bead to match the purpose. I have tied this fly in more variations than I tie for a woolly bugger. Carp have definite colour preferences in different colour water. They can be very moody some days and display extremely specific colour preferences.

The dilemma when fishing for cats and carp is the carrying of two rods and I decided to put the Tugger below my catfish BBB fly. This would allow me to change target species in a heartbeat. Little did I know, the Carp Tugger would prove to be the dominant fly for catfish in deep water and early morning conditions! The BBB became more of an afternoon fly and works well when the fish were really on the fly. Some days up to 90% of my cats are caught on a size 6 or 8 Carp Tugger. The fly lends itself well to catching cats as it makes a very distinctive plopping sound on the water that the cats really like. The other advantage with it is that cats often sit on the bottom of the dam waiting for whatever made the plopping sound to sink so that they can gobble it up. It sinks quickly into the zone and right to where the catfish is lying before he gets bored and swims off.

The Vaal-Orange river system lends itself well to targeting catfish as I discovered when I did a trip with a group of guys on the Orange River near Douglas. The trip was not for any specific species and as the smallmouth yellowfish were not really on the bite they were quickly dismissed when the guys started targeting catfish and were catching largemouth as a by-catch to the catfish they were targeting. The lucky ones in the group caught not only their first river catfish but largies too. Mmmm…. who would have thought it?

It seemed that this part of the Orange River is a little dirty and the largemouth were slightly more prone to zoning in on things that made a noise. Catfish in dirty water are by the same principle also prone to chase things that make a noise or plop on the water.

and although the Tugger has splashed largies into biting on the mighty Vaal and Orange rivers it has also proved to be a good fly in other places.

In the last sixteen months or so I know of more than one hundred largies having been caught in dams and rivers while splashing for catfish. I target various dams on the Vaal system and recently there have been a large number of largies caught on the Tugger, in some cases these have been actively targeted. If a fish is seen rising a cast or two is made and the largie hits the fly like a madman. They come onto the fly with gusto and snack it, normally very close to the bank and with just two splashes he is there.

So now, is the Tugger really a carp, largie or a catfish specific fly? No, wait for it, there’s more!

If you fish it under a few more fishing condition you are sure to land blue kurper, smallmouth yellowfish, big trout, bass, etc. Besides my own catches, many others have caught other species on the Tugger. I know anglers who use it exclusively as a deep water trout fly….. Who would have ever guessed?

This story is from:
January 2020 Southern African Flyfishing Magazine
by saflyfishingmag