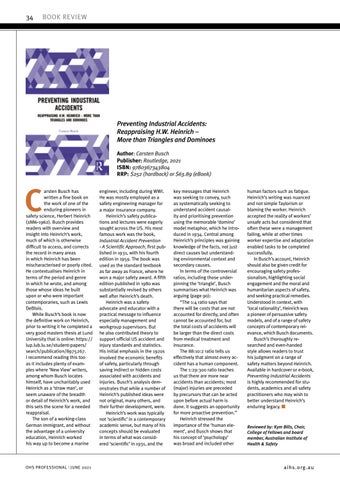 arsten Busch has written a fine book on the work of one of the enduring pioneers in safety science, Herbert Heinrich (1886-1962). Busch provides readers with overview and insight into Heinrich’s work, much of which is otherwise difficult to access, and corrects the record in many areas in which Heinrich has been mischaracterised or poorly cited. He contextualises Heinrich in terms of the period and genre in which he wrote, and among those whose ideas he built upon or who were important contemporaries, such as Lewis DeBlois. While Busch’s book is now the definitive work on Heinrich, prior to writing it he completed a very good masters thesis at Lund University that is online: https:// lup.lub.lu.se/student-papers/ search/publication/8975267. I recommend reading this too as it includes plenty of examples where ‘New View’ writers, among whom Busch locates himself, have uncharitably used Heinrich as a ‘straw man’, or seem unaware of the breadth or detail of Heinrich’s work, and this sets the scene for a needed reappraisal. The son of a working-class German immigrant, and without the advantage of a university education, Heinrich worked his way up to become a marine

engineer, including during WWI. He was mostly employed as a safety engineering manager for a major insurance company. Heinrich’s safety publications and lectures were eagerly sought across the US. His most famous work was the book, Industrial Accident Prevention - A Scientific Approach, first published in 1931, with his fourth edition in 1959. The book was used as the standard textbook as far away as France, where he won a major safety award. A fifth edition published in 1980 was substantially revised by others well after Heinrich’s death. Heinrich was a safety advocate and educator with a practical message to influence especially management and workgroup supervisors. But he also contributed theory to support official US accident and injury standards and statistics. His initial emphasis in the 1920s involved the economic benefits of safety, particularly through saving indirect or hidden costs associated with accidents and injuries. Busch’s analysis demonstrates that while a number of Heinrich’s published ideas were not original, many others, and their further development, were. Heinrich’s work was typically not ‘scientific’ in a contemporary academic sense, but many of his concepts should be evaluated in terms of what was considered ‘scientific’ in 1931, and the

key messages that Heinrich was seeking to convey, such as systematically seeking to understand accident causality and prioritising prevention using the memorable ‘domino’ model metaphor, which he introduced in 1934. Central among Heinrich’s principles was gaining knowledge of the facts, not just direct causes but understanding environmental context and secondary causes. In terms of the controversial ratios, including those underpinning the ‘triangle’, Busch summarises what Heinrich was arguing (page 90): “The 1:4 ratio says that there will be costs that are not accounted for directly, and often cannot be accounted for, but the total costs of accidents will be larger than the direct costs from medical treatment and insurance. The 88:10:2 ratio tells us effectively that almost every accident has a human component. The 1:29:300 ratio teaches us that there are more near accidents than accidents; most (major) injuries are preceded by precursors that can be acted upon before actual harm is done. It suggests an opportunity for more proactive prevention.” Heinrich stressed the importance of the ‘human element’, and Busch shows that his concept of ‘psychology’ was broad and included other

human factors such as fatigue. Heinrich’s writing was nuanced and not simple Taylorism or blaming the worker. Heinrich accepted the reality of workers’ unsafe acts but considered that often these were a management failing, while at other times worker expertise and adaptation enabled tasks to be completed successfully. In Busch’s account, Heinrich should also be given credit for encouraging safety professionalism, highlighting social engagement and the moral and humanitarian aspects of safety, and seeking practical remedies. Understood in context, with ‘local rationality’, Heinrich was a pioneer of persuasive safety models, and of a range of safety concepts of contemporary relevance, which Busch documents. Busch’s thoroughly researched and even-handed style allows readers to trust his judgment on a range of safety matters beyond Heinrich. Available in hardcover or e-book, Preventing Industrial Accidents is highly recommended for students, academics and all safety practitioners who may wish to better understand Heinrich’s enduring legacy. n