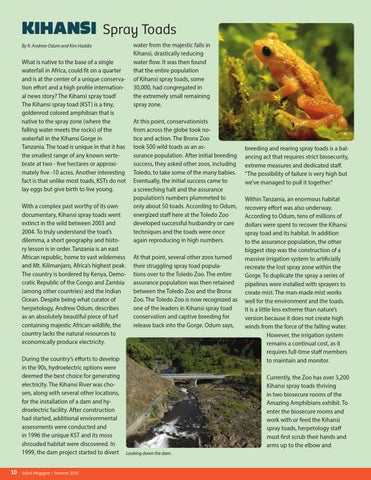 KIHANSI Spray Toads water from the majestic falls in Kihansi, drastically reducing water flow. It was then found that the entire population of Kihansi spray toads, some 30,000, had congregated in the extremely small remaining spray zone.

What is native to the base of a single waterfall in Africa, could fit on a quarter and is at the center of a unique conservation effort and a high profile international news story? The Kihansi spray toad! The Kihansi spray toad (KST) is a tiny, goldenrod colored amphibian that is native to the spray zone (where the falling water meets the rocks) of the waterfall in the Kihansi Gorge in Tanzania. The toad is unique in that it has the smallest range of any known vertebrate at two - five hectares or approximately five -10 acres. Another interesting fact is that unlike most toads, KSTs do not lay eggs but give birth to live young. With a complex past worthy of its own documentary, Kihansi spray toads went extinct in the wild between 2003 and 2004. To truly understand the toad’s dilemma, a short geography and history lesson is in order. Tanzania is an east African republic, home to vast wilderness and Mt. Kilimanjaro, Africa’s highest peak. The country is bordered by Kenya, Democratic Republic of the Congo and Zambia (among other countries) and the Indian Ocean. Despite being what curator of herpetology, Andrew Odum, describes as an absolutely beautiful piece of turf containing majestic African wildlife, the country lacks the natural resources to economically produce electricity. During the country’s efforts to develop in the 90s, hydroelectric options were deemed the best choice for generating electricity. The Kihansi River was chosen, along with several other locations, for the installation of a dam and hydroelectric facility. After construction had started, additional environmental assessments were conducted and in 1996 the unique KST and its moss shrouded habitat were discovered. In 1999, the dam project started to divert 10

At this point, conservationists from across the globe took notice and action. The Bronx Zoo took 500 wild toads as an assurance population. After initial breeding success, they asked other zoos, including Toledo, to take some of the many babies. Eventually, the initial success came to a screeching halt and the assurance population’s numbers plummeted to only about 50 toads. According to Odum, energized staff here at the Toledo Zoo developed successful husbandry or care techniques and the toads were once again reproducing in high numbers. At that point, several other zoos turned their struggling spray toad populations over to the Toledo Zoo. The entire assurance population was then retained between the Toledo Zoo and the Bronx Zoo. The Toledo Zoo is now recognized as one of the leaders in Kihansi spray toad conservation and captive breeding for release back into the Gorge. Odum says,

breeding and rearing spray toads is a balancing act that requires strict biosecurity, extreme measures and dedicated staff. “The possibility of failure is very high but we’ve managed to pull it together.” Within Tanzania, an enormous habitat recovery effort was also underway. According to Odum, tens of millions of dollars were spent to recover the Kihansi spray toad and its habitat. In addition to the assurance population, the other biggest step was the construction of a massive irrigation system to artificially recreate the lost spray zone within the Gorge. To duplicate the spray a series of pipelines were installed with sprayers to create mist. The man-made mist works well for the environment and the toads. It is a little less extreme than nature’s version because it does not create high winds from the force of the falling water. However, the irrigation system remains a continual cost, as it requires full-time staff members to maintain and monitor. Currently, the Zoo has over 3,200 Kihansi spray toads thriving in two biosecure rooms of the Amazing Amphibians exhibit. To enter the biosecure rooms and work with or feed the Kihansi spray toads, herpetology staff must first scrub their hands and arms up to the elbow and

Looking down the dam. 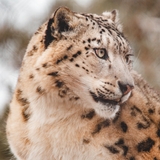