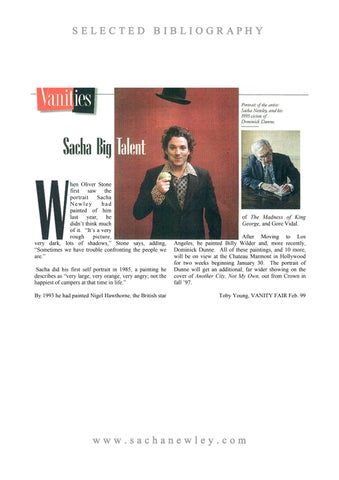 hen Oliver Stone first saw the portrait Sacha Newley had painted of him last year, he didn't think much of it. "It's a very rough picture, very dark, lots of shadows," Stone says, adding, "Sometimes we have trouble confronting the people we are." Sacha did his first self portrait in 1985, a painting he describes as "very large, very orange, very angry; not the happiest of campers at that time in life." By 1993 he had painted Nigel Hawthorne, the British star

of The Madness of King George, and Gore Vidal. After Moving to Los Angeles, he painted Billy Wilder and, more recently, Dominick Dunne. All of these paintings, and 10 more, will be on view at the Chateau Marmont in Hollywood for two weeks beginning January 30. The portrait of Dunne will get an additional, far wider showing on the cover of Another City, Not My Own, out from Crown in fall '97. Toby Young, VANITY FAIR Feb. 99 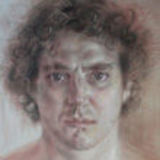