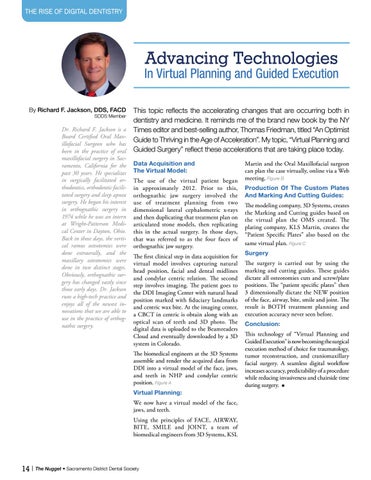 Dr. Richard F. Jackson is a Board Certified Oral Maxillofacial Surgeon who has been in the practice of oral maxillofacial surgery in Sacramento, California for the past 30 years. He specializes in surgically facilitated orthodontics, orthodontic facilitated surgery and sleep apnea surgery. He began his interest in orthognathic surgery in 1974 while he was an intern at Wright-Patterson Medical Center in Dayton, Ohio. Back in those days, the vertical ramus osteotomies were done extraorally, and the maxillary osteotomies were done in two distinct stages. Obviously, orthognathic surgery has changed vastly since those early days. Dr. Jackson runs a high-tech practice and enjoys all of the newest innovations that we are able to use in the practice of orthognathic surgery.

This topic reflects the accelerating changes that are occurring both in dentistry and medicine. It reminds me of the brand new book by the NY Times editor and best-selling author, Thomas Friedman, titled “An Optimist Guide to Thriving in the Age of Acceleration”. My topic, “Virtual Planning and Guided Surgery” reflect these accelerations that are taking place today. Data Acquisition and The Virtual Model: The use of the virtual patient began in approximately 2012. Prior to this, orthognathic jaw surgery involved the use of treatment planning from two dimensional lateral cephalometric x-rays and then duplicating that treatment plan on articulated stone models, then replicating this in the actual surgery. In those days, that was referred to as the four faces of orthognathic jaw surgery. The first clinical step in data acquisition for virtual model involves capturing natural head position, facial and dental midlines and condylar centric relation. The second step involves imaging. The patient goes to the DDI Imaging Center with natural head position marked with fiduciary landmarks and centric wax bite. At the imaging center, a CBCT in centric is obtain along with an optical scan of teeth and 3D photo. The digital data is uploaded to the Beamreaders Cloud and eventually downloaded by a 3D system in Colorado. The biomedical engineers at the 3D Systems assemble and render the acquired data from DDI into a virtual model of the face, jaws, and teeth in NHP and condylar centric position. Figure A Virtual Planning: We now have a virtual model of the face, jaws, and teeth. Using the principles of FACE, AIRWAY, BITE, SMILE and JOINT, a team of biomedical engineers from 3D Systems, KSL

Martin and the Oral Maxillofacial surgeon can plan the case virtually, online via a Web meeting. Figure B Production Of The Custom Plates And Marking And Cutting Guides: The modeling company, 3D Systems, creates the Marking and Cutting guides based on the virtual plan the OMS created. The plating company, KLS Martin, creates the “Patient Specific Plates” also based on the same virtual plan. Figure C Surgery The surgery is carried out by using the marking and cutting guides. These guides dictate all osteotomies cuts and screw/plate positions. The “patient specific plates” then 3 dimensionally dictate the NEW position of the face, airway, bite, smile and joint. The result is BOTH treatment planning and execution accuracy never seen before. Conclusion: This technology of “Virtual Planning and Guided Execution” is now becoming the surgical execution method of choice for traumatology, tumor reconstruction, and craniomaxillary facial surgery. A seamless digital workflow increases accuracy, predictability of a procedure while reducing invasiveness and chairside time during surgery. 

The Rise of Digital Dentistry 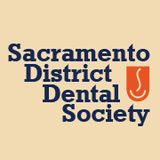