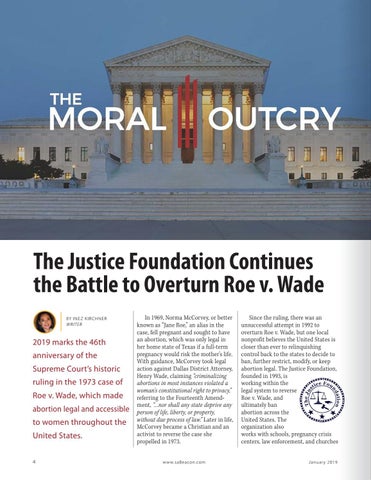 2019 marks the 46th anniversary of the Supreme Court’s historic ruling in the 1973 case of Roe v. Wade, which made abortion legal and accessible to women throughout the United States. 4

In 1969, Norma McCorvey, or better known as “Jane Roe,” an alias in the case, fell pregnant and sought to have an abortion, which was only legal in her home state of Texas if a full-term pregnancy would risk the mother’s life. With guidance, McCorvey took legal action against Dallas District Attorney, Henry Wade, claiming “criminalizing abortions in most instances violated a woman’s constitutional right to privacy,” referring to the Fourteenth Amendment, “…nor shall any state deprive any person of life, liberty, or property, without due process of law.” Later in life, McCorvey became a Christian and an activist to reverse the case she propelled in 1973. w w w.sa B e a c o n .c o m

Since the ruling, there was an unsuccessful attempt in 1992 to overturn Roe v. Wade, but one local nonprofit believes the United States is closer than ever to relinquishing control back to the states to decide to ban, further restrict, modify, or keep abortion legal. The Justice Foundation, founded in 1993, is working within the legal system to reverse Roe v. Wade, and ultimately ban abortion across the United States. The organization also works with schools, pregnancy crisis centers, law enforcement, and churches Januar y 2019 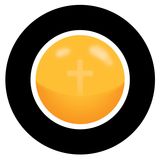 Read about local ministries helping those in need in our community with the help of local businesses.

Read about local ministries helping those in need in our community with the help of local businesses.