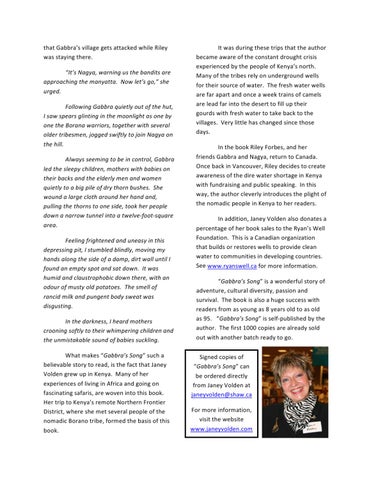 that Gabbra’s village gets attacked while Riley was staying there. “It’s Nagya, warning us the bandits are approaching the manyatta. Now let’s go,” she urged. Following Gabbra quietly out of the hut, I saw spears glinting in the moonlight as one by one the Borana warriors, together with several older tribesmen, jogged swiftly to join Nagya on the hill. Always seeming to be in control, Gabbra led the sleepy children, mothers with babies on their backs and the elderly men and women quietly to a big pile of dry thorn bushes. She wound a large cloth around her hand and, pulling the thorns to one side, took her people down a narrow tunnel into a twelve-foot-square area. Feeling frightened and uneasy in this depressing pit, I stumbled blindly, moving my hands along the side of a damp, dirt wall until I found an empty spot and sat down. It was humid and claustrophobic down there, with an odour of musty old potatoes. The smell of rancid milk and pungent body sweat was disgusting. In the darkness, I heard mothers crooning softly to their whimpering children and the unmistakable sound of babies suckling. What makes “Gabbra’s Song” such a believable story to read, is the fact that Janey Volden grew up in Kenya. Many of her experiences of living in Africa and going on fascinating safaris, are woven into this book. Her trip to Kenya’s remote Northern Frontier District, where she met several people of the nomadic Borano tribe, formed the basis of this book.

It was during these trips that the author became aware of the constant drought crisis experienced by the people of Kenya’s north. Many of the tribes rely on underground wells for their source of water. The fresh water wells are far apart and once a week trains of camels are lead far into the desert to fill up their gourds with fresh water to take back to the villages. Very little has changed since those days. In the book Riley Forbes, and her friends Gabbra and Nagya, return to Canada. Once back in Vancouver, Riley decides to create awareness of the dire water shortage in Kenya with fundraising and public speaking. In this way, the author cleverly introduces the plight of the nomadic people in Kenya to her readers. In addition, Janey Volden also donates a percentage of her book sales to the Ryan’s Well Foundation. This is a Canadian organization that builds or restores wells to provide clean water to communities in developing countries. See www.ryanswell.ca for more information. “Gabbra’s Song” is a wonderful story of adventure, cultural diversity, passion and survival. The book is also a huge success with readers from as young as 8 years old to as old as 95. “Gabbra’s Song” is self-published by the author. The first 1000 copies are already sold out with another batch ready to go. Signed copies of “Gabbra’s Song” can be ordered directly from Janey Volden at janeyvolden@shaw.ca For more information, visit the website www.janeyvolden.com 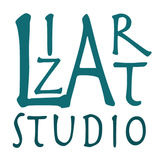