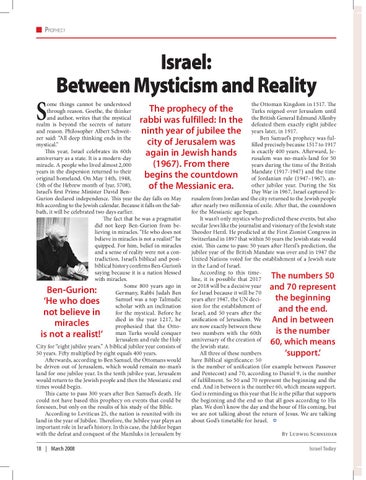 Israel: Between Mysticism and Reality

ome things cannot be understood through reason. Goethe, the thinker and author, writes that the mystical realm is beyond the secrets of nature and reason. Philosopher Albert Schweitzer said: “All deep thinking ends in the mystical.” This year, Israel celebrates its 60th anniversary as a state. It is a modern-day miracle. A people who lived almost 2,000 years in the dispersion returned to their original homeland. On May 14th, 1948, (5th of the Hebrew month of Iyar, 5708), Israel’s first Prime Minister David BenGurion declared independence. This year the day falls on May 8th according to the Jewish calendar. Because it falls on the Sabbath, it will be celebrated two days earlier. The fact that he was a pragmatist did not keep Ben-Gurion from believing in miracles. “He who does not believe in miracles is not a realist!” he quipped. For him, belief in miracles and a sense of reality were not a contradiction. Israel’s biblical and postbiblical history confirms Ben-Gurion’s saying because it is a nation blessed with miracles. Some 800 years ago in Germany, Rabbi Judah Ben Samuel was a top Talmudic scholar with an inclination for the mystical. Before he died in the year 1217, he prophesied that the Ottoman Turks would conquer Jerusalem and rule the Holy City for “eight jubilee years.” A biblical jubilee year consists of 50 years. Fifty multiplied by eight equals 400 years. Afterwards, according to Ben Samuel, the Ottomans would be driven out of Jerusalem, which would remain no-man’s land for one jubilee year. In the tenth jubilee year, Jerusalem would return to the Jewish people and then the Messianic end times would begin. This came to pass 300 years after Ben Samuel’s death. He could not have based this prophecy on events that could be foreseen, but only on the results of his study of the Bible. According to Leviticus 25, the nation is reunited with its land in the year of Jubilee. Therefore, the Jubilee year plays an important role in Israel’s history. In this case, the Jubilee began with the defeat and conquest of the Mamluks in Jerusalem by

Ben-Gurion: ‘He who does not believe in miracles is not a realist!‘

the Ottoman Kingdom in 1517. The Turks reigned over Jerusalem until the British General Edmund Allenby defeated them exactly eight jubilee years later, in 1917. Ben Samuel’s prophecy was fulfilled precisely because 1517 to 1917 is exactly 400 years. Afterward, Jerusalem was no-man’s-land for 50 years during the time of the British Mandate (1917-1947) and the time of Jordanian rule (1947–1967), another jubilee year. During the Six Day War in 1967, Israel captured Jerusalem from Jordan and the city returned to the Jewish people after nearly two millennia of exile. After that, the countdown for the Messianic age began. It wasn’t only mystics who predicted these events, but also secular Jews like the journalist and visionary of the Jewish state Theodor Herzl. He predicted at the First Zionist Congress in Switzerland in 1897 that within 50 years the Jewish state would exist. This came to pass: 50 years after Herzl’s prediction, the jubilee year of the British Mandate was over and in 1947 the United Nations voted for the establishment of a Jewish state in the Land of Israel. According to this timeThe numbers 50 line, it is possible that 2017 or 2018 will be a decisive year and 70 represent for Israel because it will be 70 the beginning years after 1947, the UN decision for the establishment of and the end. Israel, and 50 years after the unification of Jerusalem. We And in between are now exactly between these is the number two numbers with the 60th anniversary of the creation of 60, which means the Jewish state. All three of these numbers ‘support.‘ have Biblical significance: 50 is the number of unification (for example between Passover and Pentecost) and 70, according to Daniel 9, is the number of fulfillment. So 50 and 70 represent the beginning and the end. And in between is the number 60, which means support. God is reminding us this year that He is the pillar that supports the beginning and the end so that all goes according to His plan. We don’t know the day and the hour of His coming, but we are not talking about the return of Jesus. We are talking about God’s timetable for Israel. 

The prophecy of the rabbi was fulfilled: In the ninth year of jubilee the city of Jerusalem was again in Jewish hands (1967). From there begins the countdown of the Messianic era.