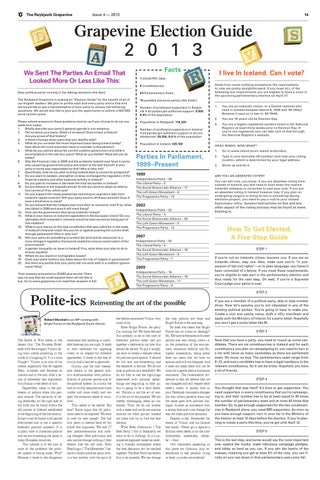 We Sent The Parties An Email That Looked More Or Less Like This:

Dear political party running in the Alþingi elections this April,

The Reykjavík Grapevine is making an &quot;Election Guide&quot; for the benefit of all of our English readers. We plan to profile each and every party and to that end we would like to ask a representative of your party to answer the following questions. We would also like to give you the opportunity to submit a 500-600 word opinion piece.

Please submit answers to these questions (and an op if you choose to do so) one week from today: 1. Briefly describe your party’s general agenda in one sentence. 2. Tell us about your party. What’s it all about? Does it have a history? Are you proud of that history? 3. Is there a foreign sister party that you identify with? 4. What do you consider the most important issue facing Iceland today? How about the most important issue to consider in this election? 5. What do you admire about the current coalition government and what it accomplished in the last four years? What do you dislike? What will you do better? 6. Was the financial crisis in 2008 and the problems Iceland now faces in some way caused by government policy and action or the lack thereof? Is your party in some way responsible for this? Why or why not? 7. Specifically, how do you plan to bring Iceland back to economic prosperity? 8. Do you want to weaken, strengthen or keep unchanged the regulation of the financial industry and other business activity in Iceland? 9. Do you plan to increase or decrease the total tax burden in Iceland? 10. Do you believe in the Icelandic króna? Or will you work to adopt an alternative currency? If so, which one? 11. Do you support the newly passed law removing an expiration date from Iceland’s capital controls? Will your party work to lift these controls? Does it have a timeframe in mind? 12. Do you believe that the collapse was more than an economic one? If so, what else failed in 2008 and does it still need fixing? 13. How can the government best serve Icelandic homes? 14. What is your stance on Iceland’s application to the European Union? Do you ultimately think Icelanders&#39; interests would be best served by being part of this coalition? 15. What is your stance on the new constitution that was called for in the wake of Iceland’s financial crisis? Are you for or against pushing the current draft through parliament? Why or why not? 16. Will your party do something to protect the land and its resources? Is a more stringent regulative framework needed to ensure conservation of the environment? 17. Is gender inequality an issue in Iceland? If so, what does your plan to do to ensure equality? 18. Where do you stand on immigration issues? 19. Does your party harbour any ideas about the role of religion in governance? 20. Are there any parties that your party will not work with in a coalition government? Why?

Their answers amounted to 20,000 plus words! There was no way that we could squeeze them all into this issue. Go to www.grapevine.is to read their answers in full.

Number of professed supporters in Reykjavík if all parties get sufficient support: 9,900, 8.4% of the population

The Battle of Wits scene in the classic film ‘The Princess Bride’ ends with the arrogant Vizzini dying from iodine poisoning in the midst of a laughing fit. It is a must Google.* Vizzini is so sure of his mental superiority that he regards Plato, Aristotle and Socrates as morons and in the end, after a series of extremely bad arguments, this illusion is the death of him. Regrettably, many in the profession of politics share this general outlook. The certainty of being absolutely on the right side of the truth can be found within the old parties of Iceland established at the beginning of the last century. In fact it can be found in all parties everywhere and is not a specific Icelandic political problem. It is in plain view in American politics and we are witnessing the same in many European countries. This outlook is at the root of most of the problems the political system is facing today. Why? Because it leads to the dangerous

conclusion that anything is justifiable because you are right. It leads to zero tolerance for opposing views, to no respect for different approaches. It leads to the loss of civility and it has led to genocide. Civility, and the lack thereof, also results in the general public’s disillusionment with politics, distrust of political parties and of the political system. In a crisis, the lack of civility becomes even more visible and more costly and can spell the economic death of countries. This needs to be solved. But how? Some argue that all politicians need to be replaced. We have to vote for new people. The last four years in Iceland have all but killed that argument. We had 27 new parliamentarians and nothing changed. New politicians and new parties change nothing if they behave like the old ones. Even Hreyfingin (“The Movement”) became a classic political party within a few months, with the spirit of

Aside from some outlying exceptions, the requirements to vote are pretty straightforward. If you meet ALL of the following few requirements you are eligible to have a voice in the upcoming parliamentary election on April 27. 1.

You are 18-years-old by Election Day.

Number of professed supporters in Iceland if all parties get sufficient support in all constituencies: 28,350, 8.9 % of the population Population in Iceland: 320,160

Polite-ics Reinventing the art of the possible Róbert Marshall is an MP running with Bright Future in the Reykjavík South district.

I live In Iceland. Can I vote?

the before-mentioned Vizzini very much alive. Enter Bright Future, the party I’m running for! We have defined this problem to be at the core of Icelandic politics today and put together a declaration on how this should be solved. To put it simply, we want to create a relaxed venue for political participation. It should be fun and non-threatening and the objective is service. We do not look at politics as a battlefield. We do not like to use the fight-lingo associated with political speak: things are beginning to heat up; this is going to be a hard battle, etc. Politics is not the art of war. It is the art of the possible. We are merely exchanging ideas on our society. Thus, we do not answer with a sneer and we do not assume motives for other parties. Instead we listen and try to find the best solution. What Besti flokkurinn (“The Best Party”) did in Reykjavík we want to do in Althingi. It is a nononsense approach based on creating a friendly atmosphere where the best decisions can be reached together. The Best Party has shown this to be possible. We can change

the way politics are done and Bright Future is the next step. So does that mean that Bright Future has no vision or ideology? No. We have differences with other parties and very strong views i.e. on the protection of the environment, economic stability and European cooperation; being polite does not mean that we have no opinion and will not disagree. And it does not mean there will not be room for a gentle joke or humorous comments. The fundamental difference is that we believe that we can disagree and still respect each other’s views. A smiley face in your Facebook comments changes the way others perceive them and the same goes with political dialogue. Answer an accusation with a smiley face and it can change the way we make political decisions. Respect is key. Remember the lesson of Vizzini and his famous last words: &quot;Never go in against a Sicilian when death is on the line! Ahahahaha, ahahahaha, ahahaha”—thud. *All characters appearing in this piece are fictitious. Any resemblance to real persons, living or dead, is purely coincidental!

Type in your kennitala (ID number) and note your voting location, which is determined by your legal address.

Show up and do it.

ARE YOU AN ABSENTEE VOTER? You can still vote, you know. If you are absentee voting from outside of Iceland, you will need to hunt down the nearest Icelandic embassy or consulate to cast your vote. If you are an absentee voting in Iceland however (say, if you plan on undergoing surgery or being at sea or something during elections proper), you need to pay a visit to your closest Sýslumaður office. Detailed instructions on this and any

other aspect of the voting process may be found at www. kosning.is.

How To Get Elected, A Five-Step Guide STEP 1 If you’re not an Icelandic citizen, become one. If you are an Icelandic citizen, stay one. Also, make sure you’re “in possession of full civil rights”—or in plain language: you haven’t been convicted of a felony. If you meet these requirements, you’re eligible to take part in the parliamentary election and thus ready for the next step. Oh wait, if you’re a Supreme Court judge your game is over. STEP 2 If you are a member of a political party, skip to step number three. Now let’s assume you’re not interested in any of the existing political parties. You’re going to have to make one. Create a nice and catchy name, draft a nifty manifesto and apply with the Ministry of Interior for a party-letter. Hopefully you won’t get a sucky letter like M. STEP 3 Now that you have a party, you need to round up some candidates. There are six constituencies in Iceland and for each constituency you plan on campaigning in, you need to turn in a list with twice as many candidates as there are parliament seats. No more, no less. The parliamentary seats range from 8–13, and every candidate has to have a legal residency in the relevant constituency. So it can be tricky. Hopefully you have a lot of friends. STEP 4 You thought that was hard? It’s time to get supporters. You need supporters in every constituency that you’re campaigning in, and their number has to be at least equal to 30 times the number of parliamentary seats and at most 40 times that number. So, to get enough supporters for the two constituencies in Reykjavík alone, you need 660 supporters. As soon as you have enough support, turn in your list to the Ministry of the Interior at least 15 days before the election. If you’re planning to create a party this time, you’ve got until April 12. STEP 5 This is the last step, and some would say the most important one: exploit the media, make ridiculous campaign pledges, and lobby as hard as you can. If you win the hearts of the masses, meaning you get at least 5% of the vote, you can finally sit your ass down in that parliamentary seat come fall. 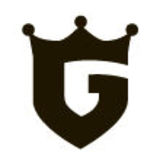