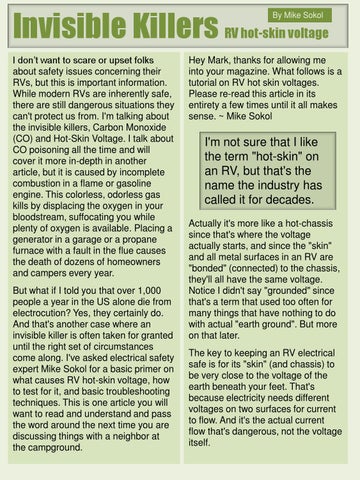 I donâ&#x20AC;&#x2122;t want to scare or upset folks about safety issues concerning their RVs, but this is important information. While modern RVs are inherently safe, there are still dangerous situations they can't protect us from. I'm talking about the invisible killers, Carbon Monoxide (CO) and Hot-Skin Voltage. I talk about CO poisoning all the time and will cover it more in-depth in another article, but it is caused by incomplete combustion in a flame or gasoline engine. This colorless, odorless gas kills by displacing the oxygen in your bloodstream, suffocating you while plenty of oxygen is available. Placing a generator in a garage or a propane furnace with a fault in the flue causes the death of dozens of homeowners and campers every year. But what if I told you that over 1,000 people a year in the US alone die from electrocution? Yes, they certainly do. And that's another case where an invisible killer is often taken for granted until the right set of circumstances come along. I've asked electrical safety expert Mike Sokol for a basic primer on what causes RV hot-skin voltage, how to test for it, and basic troubleshooting techniques. This is one article you will want to read and understand and pass the word around the next time you are discussing things with a neighbor at the campground.

Hey Mark, thanks for allowing me into your magazine. What follows is a tutorial on RV hot skin voltages. Please re-read this article in its entirety a few times until it all makes sense. ~ Mike Sokol

I'm not sure that I like the term "hot-skin" on an RV, but that's the name the industry has called it for decades. Actually it's more like a hot-chassis since that's where the voltage actually starts, and since the "skin" and all metal surfaces in an RV are "bonded" (connected) to the chassis, they'll all have the same voltage. Notice I didn't say "grounded" since that's a term that used too often for many things that have nothing to do with actual "earth ground". But more on that later.

The key to keeping an RV electrical safe is for its "skin" (and chassis) to be very close to the voltage of the earth beneath your feet. That's because electricity needs different voltages on two surfaces for current to flow. And it's the actual current flow that's dangerous, not the voltage itself. 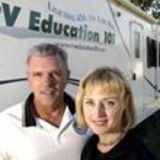 In this special RV safety edition learn about invisible RV safety threats like RV hot-skin voltage and Carbon Monoxide poisoning, and what y...

In this special RV safety edition learn about invisible RV safety threats like RV hot-skin voltage and Carbon Monoxide poisoning, and what y...