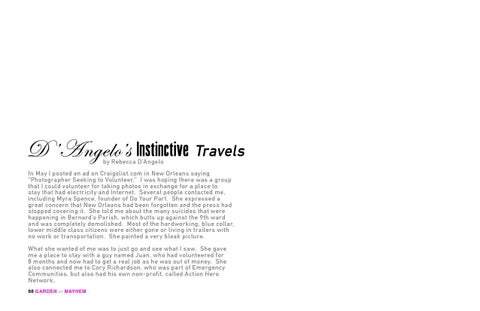 by Rebecca D’Angelo In May I posted an ad on Craigslist.com in New Orleans saying “Photographer Seeking to Volunteer.” I was hoping there was a group that I could volunteer for taking photos in exchange for a place to stay that had electricity and Internet. Several people contacted me, including Myra Spence, founder of Do Your Part. She expressed a great concern that New Orleans had been forgotten and the press had stopped covering it. She told me about the many suicides that were happening in Bernard’s Parish, which butts up against the 9th ward and was completely demolished. Most of the hardworking, blue collar, lower middle class citizens were either gone or living in trailers with no work or transportation. She painted a ver y bleak picture. What she wanted of me was to just go and see what I saw. She gave me a place to stay with a guy named Juan, who had volunteered for 8 months and now had to get a real job as he was out of money. She also connected me to Cor y Richardson, who was part of Emergency Communities, but also had his own non-profit, called Action Hero Network. 68 GARDEN 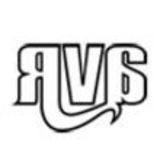