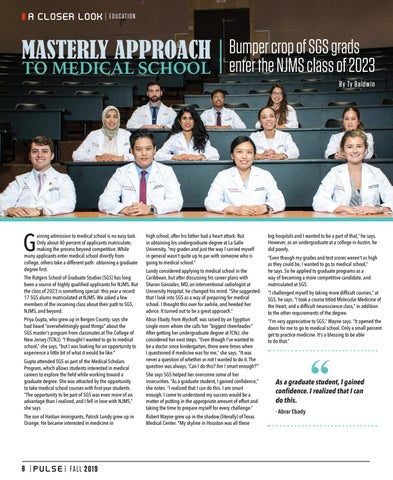 aining admission to medical school is no easy task. Only about 40 percent of applicants matriculate, making the process beyond competitive. While many applicants enter medical school directly from college, others take a different path: obtaining a graduate degree first. The Rutgers School of Graduate Studies (SGS) has long been a source of highly qualified applicants for NJMS. But the class of 2023 is something special: this year a record 17 SGS alums matriculated at NJMS. We asked a few members of the incoming class about their path to SGS, NJMS, and beyond. Priya Gupta, who grew up in Bergen County, says she had heard “overwhelmingly good things” about the SGS master’s program from classmates at The College of New Jersey (TCNJ). “I thought I wanted to go to medical school,” she says, “but I was looking for an opportunity to experience a little bit of what it would be like.” Gupta attended SGS as part of the Medical Scholars Program, which allows students interested in medical careers to explore the field while working toward a graduate degree. She was attracted by the opportunity to take medical school courses with first-year students. “The opportunity to be part of SGS was even more of an advantage than I realized, and I fell in love with NJMS,” she says. The son of Haitian immigrants, Patrick Lundy grew up in Orange. He became interested in medicine in

high school, after his father had a heart attack. But in obtaining his undergraduate degree at La Salle University, “my grades and just the way I carried myself in general wasn’t quite up to par with someone who is going to medical school.” Lundy considered applying to medical school in the Caribbean, but after discussing his career plans with Sharon Gonzales, MD, an interventional radiologist at University Hospital, he changed his mind. “She suggested that I look into SGS as a way of preparing for medical school. I thought this over for awhile, and heeded her advice. It turned out to be a great approach.” Abrar Ebady, from Wyckoff, was raised by an Egyptian single mom whom she calls her “biggest cheerleader.” After getting her undergraduate degree at TCNJ, she considered her next steps. “Even though I’ve wanted to be a doctor since kindergarten, there were times when I questioned if medicine was for me,” she says. “It was never a question of whether or not I wanted to do it. The question was always, ‘Can I do this? Am I smart enough?’” She says SGS helped her overcome some of her insecurities. “As a graduate student, I gained confidence,” she notes. “I realized that I can do this. I am smart enough. I came to understand my success would be a matter of putting in the appropriate amount of effort and taking the time to prepare myself for every challenge.” Robert Wayne grew up in the shadow (literally) of Texas Medical Center. “My skyline in Houston was all these

big hospitals and I wanted to be a part of that,” he says. However, as an undergraduate at a college in Austin, he did poorly. “Even though my grades and test scores weren’t as high as they could be, I wanted to go to medical school,” he says. So he applied to graduate programs as a way of becoming a more competitive candidate, and matriculated at SGS. “I challenged myself by taking more difficult courses,” at SGS, he says. “I took a course titled Molecular Medicine of the Heart, and a difficult neuroscience class,” in addition to the other requirements of the degree. “I’m very appreciative to SGS,” Wayne says. “It opened the doors for me to go to medical school. Only a small percent get to practice medicine. It’s a blessing to be able to do that.”

As a graduate student, I gained confidence. I realized that I can do this. - Abrar Ebady 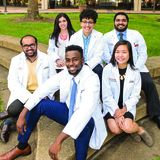