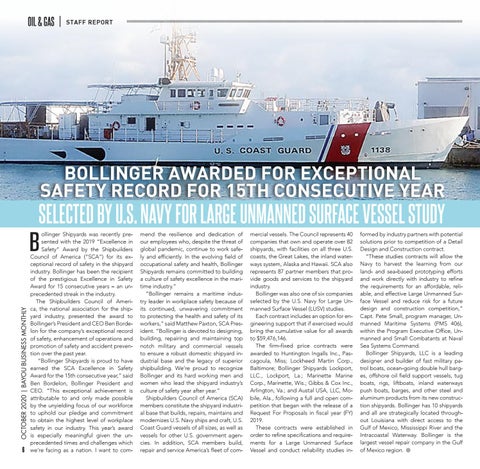 ollinger Shipyards was recently presented with the 2019 “Excellence in Safety” Award by the Shipbuilders Council of America (“SCA”) for its exceptional record of safety in the shipyard industry. Bollinger has been the recipient of the prestigious Excellence in Safety Award for 15 consecutive years – an unprecedented streak in the industry. The Shipbuilders Council of America, the national association for the shipyard industry, presented the award to Bollinger’s President and CEO Ben Bordelon for the company’s exceptional record of safety, enhancement of operations and promotion of safety and accident prevention over the past year. “Bollinger Shipyards is proud to have earned the SCA Excellence in Safety Award for the 15th consecutive year,” said Ben Bordelon, Bollinger President and CEO. “This exceptional achievement is attributable to and only made possible by the unyielding focus of our workforce to uphold our pledge and commitment to obtain the highest level of workplace safety in our industry. This year’s award is especially meaningful given the unprecedented times and challenges which we’re facing as a nation. I want to com-

mend the resilience and dedication of our employees who, despite the threat of global pandemic, continue to work safely and efficiently. In the evolving field of occupational safety and health, Bollinger Shipyards remains committed to building a culture of safety excellence in the maritime industry.” “Bollinger remains a maritime industry leader in workplace safety because of its continued, unwavering commitment to protecting the health and safety of its workers,” said Matthew Paxton, SCA President. “Bollinger is devoted to designing, building, repairing and maintaining top notch military and commercial vessels to ensure a robust domestic shipyard industrial base and the legacy of superior shipbuilding. We’re proud to recognize Bollinger and its hard working men and women who lead the shipyard industry’s culture of safety year after year.” Shipbuilders Council of America (SCA) members constitute the shipyard industrial base that builds, repairs, maintains and modernizes U.S. Navy ships and craft, U.S. Coast Guard vessels of all sizes, as well as vessels for other U.S. government agencies. In addition, SCA members build, repair and service America’s fleet of com-

mercial vessels. The Council represents 40 companies that own and operate over 82 shipyards, with facilities on all three U.S. coasts, the Great Lakes, the inland waterways system, Alaska and Hawaii. SCA also represents 87 partner members that provide goods and services to the shipyard industry. Bollinger was also one of six companies selected by the U.S. Navy for Large Unmanned Surface Vessel (LUSV) studies. Each contract includes an option for engineering support that if exercised would bring the cumulative value for all awards to $59,476,146. The firm-fixed price contracts were awarded to Huntington Ingalls Inc., Pascagoula, Miss; Lockheed Martin Corp., Baltimore; Bollinger Shipyards Lockport, LLC., Lockport, La.; Marinette Marine Corp., Marinette, Wis.; Gibbs &amp; Cox Inc., Arlington, Va.; and Austal USA, LLC, Mobile, Ala., following a full and open competition that began with the release of a Request For Proposals in fiscal year (FY) 2019. These contracts were established in order to refine specifications and requirements for a Large Unmanned Surface Vessel and conduct reliability studies in-

formed by industry partners with potential solutions prior to competition of a Detail Design and Construction contract. “These studies contracts will allow the Navy to harvest the learning from our land- and sea-based prototyping efforts and work directly with industry to refine the requirements for an affordable, reliable, and effective Large Unmanned Surface Vessel and reduce risk for a future design and construction competition,” Capt. Pete Small, program manager, Unmanned Maritime Systems (PMS 406), within the Program Executive Office, Unmanned and Small Combatants at Naval Sea Systems Command. Bollinger Shipyards, LLC is a leading designer and builder of fast military patrol boats, ocean-going double hull barges, offshore oil field support vessels, tug boats, rigs, liftboats, inland waterways push boats, barges, and other steel and aluminum products from its new construction shipyards. Bollinger has 10 shipyards and all are strategically located throughout Louisiana with direct access to the Gulf of Mexico, Mississippi River and the Intracoastal Waterway. Bollinger is the largest vessel repair company in the Gulf of Mexico region. 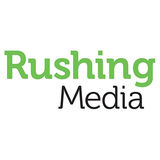