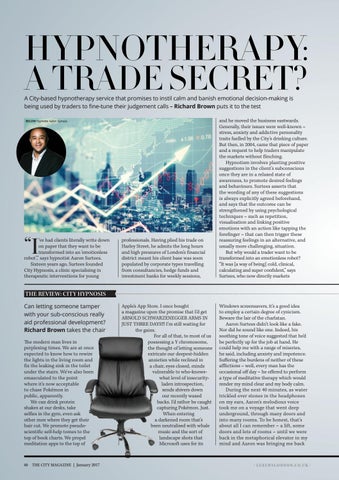 HYPNOTHERAPY: A TRADE SECRET? A City-based hypnotherapy service that promises to instil calm and banish emotional decision-making is being used by traders to fine-tune their judgement calls – Richard Brown puts it to the test

professionals. Having plied his trade on Harley Street, he admits the long hours and high pressures of London’s financial district meant his client base was soon populated by corporate types travelling from consultancies, hedge funds and investment banks for weekly sessions,

and he moved the business eastwards. Generally, their issues were well-known – stress, anxiety and addictive personality traits fuelled by the City’s drinking culture. But then, in 2004, came that piece of paper and a request to help traders manipulate the markets without flinching. Hypnotism involves planting positive suggestions in the client’s subconscious once they are in a relaxed state of awareness, to promote desired feelings and behaviours. Surtees asserts that the wording of any of these suggestions is always explicitly agreed beforehand, and says that the outcome can be strengthened by using psychological techniques – such as repetition, visualisation and linking positive emotions with an action like tapping the forefinger – that can then trigger these reassuring feelings in an alternative, and usually more challenging, situation. But why would a trader want to be transformed into an emotionless robot? “It was [a way of being] cold, clinical, calculating and super confident,” says Surtees, who now directly markets

Apple’s App Store. I once bought a magazine upon the promise that I’d get ARNOLD SCHWARZENEGGER ARMS IN JUST THREE DAYS!!! I’m still waiting for the gains. For all of that, to most of us possessing a Y chromosome, the thought of letting someone extricate our deepest-hidden anxieties while reclined in a chair, eyes closed, minds vulnerable to who-knowswhat level of insecurityladen introspection, sends shivers down our recently waxed backs. I’d rather be caught capturing Pokémon. Just. When entering a darkened room that’s been neutralised with whale music and the sort of landscape shots that Microsoft uses for its

Windows screensavers, it’s a good idea to employ a certain degree of cynicism. Beware the lair of the charlatan. Aaron Surtees didn’t look like a fake. Nor did he sound like one. Indeed, his soothing tone of voice suggested that he’d be perfectly up for the job at hand. He could help me with a range of miseries, he said, including anxiety and impotence. Suffering the burdens of neither of these afflictions – well, every man has the occasional off day – he offered to perform a type of meditative therapy which would render my mind clear and my body calm. During the next 40 minutes, as water trickled over stones in the headphones on my ears, Aaron’s melodious voice took me on a voyage that went deep underground, through many doors and into many rooms. To be honest, that’s about all I can remember – a lift, some doors and lots of rooms – until we were back in the metaphorical elevator in my mind and Aaron was bringing me back

’ve had clients literally write down on paper that they want to be transformed into an ‘emotionless robot’,” says hypnotist Aaron Surtees. Sixteen years ago, Surtees founded City Hypnosis, a clinic specialising in therapeutic interventions for young

The Review: City hypnosis Can letting someone tamper with your sub-conscious really aid professional development? Richard Brown takes the chair The modern man lives in perplexing times. We are at once expected to know how to rewire the lights in the living room and fix the leaking sink in the toilet under the stairs. We’ve also been emasculated to the point where it’s now acceptable to chase Pokémon in public, apparently. We can drink protein shakes at our desks, take selfies in the gym, even ask other men where they get their hair cut. We promote pseudoscientific self-help tomes to the top of book charts. We propel meditation apps to the top of

Welcome to the January edition of The City magazine, celebrating the dynamism of the area and bringing you the latest features, articles and...

Welcome to the January edition of The City magazine, celebrating the dynamism of the area and bringing you the latest features, articles and...