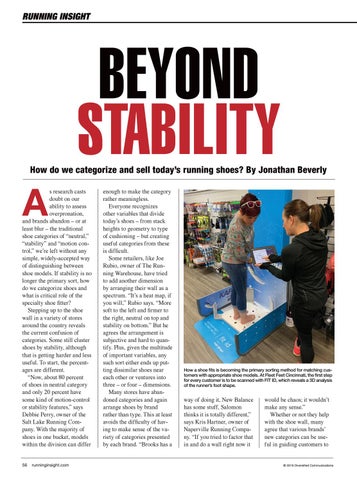 How do we categorize and sell today’s running shoes? By Jonathan Beverly

s research casts doubt on our ability to assess overpronation, and brands abandon – or at least blur – the traditional shoe categories of “neutral,” “stability” and “motion control,” we’re left without any simple, widely-accepted way of distinguishing between shoe models. If stability is no longer the primary sort, how do we categorize shoes and what is critical role of the specialty shoe fitter? Stepping up to the shoe wall in a variety of stores around the country reveals the current confusion of categories. Some still cluster shoes by stability, although that is getting harder and less useful. To start, the percentages are different. “Now, about 80 percent of shoes in neutral category and only 20 percent have some kind of motion-control or stability features,” says Debbie Perry, owner of the Salt Lake Running Company. With the majority of shoes in one bucket, models within the division can differ

enough to make the category rather meaningless. Everyone recognizes other variables that divide today’s shoes – from stack heights to geometry to type of cushioning – but creating useful categories from these is difficult. Some retailers, like Joe Rubio, owner of The Running Warehouse, have tried to add another dimension by arranging their wall as a spectrum. “It’s a heat map, if you will,” Rubio says. “More soft to the left and firmer to the right, neutral on top and stability on bottom.” But he agrees the arrangement is subjective and hard to quantify. Plus, given the multitude of important variables, any such sort either ends up putting dissimilar shoes near each other or ventures into three – or four – dimensions. Many stores have abandoned categories and again arrange shoes by brand rather than type. This at least avoids the difficulty of having to make sense of the variety of categories presented by each brand. “Brooks has a

How a shoe fits is becoming the primary sorting method for matching customers with appropriate shoe models. At Fleet Feet Cincinnati, the first step for every customer is to be scanned with FIT ID, which reveals a 3D analysis of the runner’s foot shape.

way of doing it, New Balance has some stuff, Salomon thinks it is totally different,” says Kris Hartner, owner of Naperville Running Company. “If you tried to factor that in and do a wall right now it

would be chaos; it wouldn’t make any sense.” Whether or not they help with the shoe wall, many agree that various brands’ new categories can be useful in guiding customers to © 2018 Diversified Communications 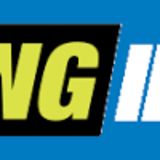