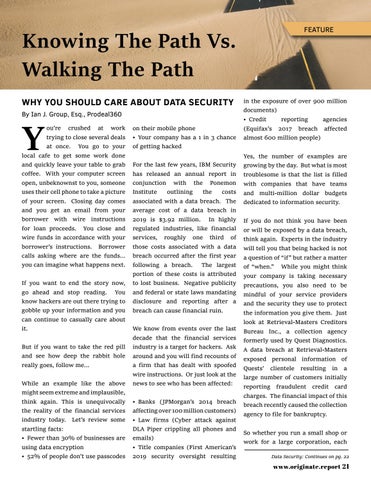 in the exposure of over 900 million documents) • Credit reporting

on their mobile phone

You go to your

local cafe to get some work done For the last few years, IBM Security

coffee. With your computer screen

has released an annual report in

open, unbeknownst to you, someone

uses their cell phone to take a picture

of your screen. Closing day comes

associated with a data breach. The

and you get an email from your

average cost of a data breach in

wire funds in accordance with your

those costs associated with a data

calls asking where are the funds...

breach occurred after the first year

you can imagine what happens next.

portion of these costs is attributed If you want to end the story now,

go ahead and stop reading.

and federal or state laws mandating

know hackers are out there trying to

disclosure and reporting after a

gobble up your information and you

breach can cause financial ruin.

can continue to casually care about it.

But if you want to take the red pill

industry is a target for hackers. Ask

and see how deep the rabbit hole

around and you will find recounts of

a firm that has dealt with spoofed wire instructions. Or just look at the

news to see who has been affected:

might seem extreme and implausible, think again. This is unequivocally

the reality of the financial services

Yes, the number of examples are

and quickly leave your table to grab

DLA Piper crippling all phones and

• Fewer than 30% of businesses are

growing by the day. But what is most troublesome is that the list is filled with companies that have teams and multi-million dollar budgets dedicated to information security. If you do not think you have been or will be exposed by a data breach, think again. Experts in the industry will tell you that being hacked is not a question of “if” but rather a matter of “when.”

your company is taking necessary precautions, you also need to be mindful of your service providers and the security they use to protect the information you give them. Just look at Retrieval-Masters Creditors Bureau Inc., a collection agency formerly used by Quest Diagnostics. A data breach at Retrieval-Masters exposed personal information of Quests’

large number of customers initially reporting fraudulent credit card charges. The financial impact of this breach recently caused the collection agency to file for bankruptcy. So whether you run a small shop or work for a large corporation, each Data Security: Continues on pg. 22 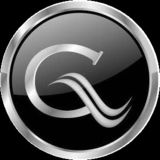