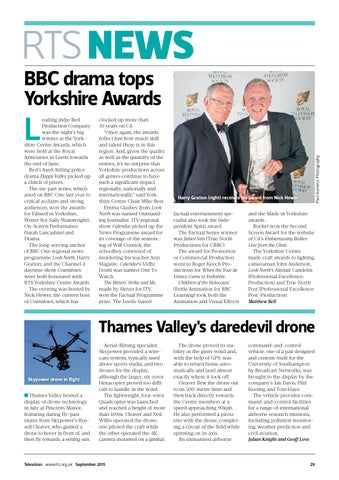 eading indie Red Production Company was the night’s big winner at the Yorkshire Centre Awards, which were held at the Royal Armouries in Leeds towards the end of June. Red’s hard-hitting police drama Happy Valley picked up a clutch of prizes. The six-part series, which aired on BBC One last year to critical acclaim and strong audiences, won the awards for Filmed in Yorkshire, Writer (for Sally Wainwright), On-­Screen Performance (Sarah Lancashire) and Drama. The long-­serving anchor of BBC One regional news programme Look North, Harry Gration, and the Channel 4 daytime show Countdown were both honoured with RTS Yorkshire Centre Awards. The evening was hosted by Nick Hewer, the current host of Countdown, which has

clocked up more than 30 years on C4. “Once again, the awards reflect just how much skill and talent there is in this region. And, given the quality as well as the quantity of the entries, it’s no surprise that Yorkshire productions across all genres continue to have such a significant impact regionally, nationally and internationally,” said Yorkshire Centre Chair Mike Best. Emma Glasbey from Look North was named Outstanding Journalist. ITV regional show Calendar picked up the News Programme award for its coverage of the sentencing of Will Cornick, the school­boy convicted of ­murdering his teacher Ann Maguire. Calendar’s Vidhi Doshi was named One To Watch. The Miners’ Strike and Me, made by Shiver for ITV, won the Factual Programme prize. The Leeds-based

Thames Valley&#39;s daredevil drone Skypower drone in flight n Thames Valley hosted a display of drone technology in July at Pincents Manor, featuring daring fly-past stunts from Skypower’s Russell Cleaver, who guided a drone to hover in front of, and then fly towards, a setting sun.

Aerial-filming specialist Skypower provided a wirecam system, typically used above sports stadia, and two drones for the display, although the larger, six-rotor Hexacopter proved too difficult to handle in the wind. The lightweight, four-rotor Quadcopter was launched and reached a height of more than 100m. Cleaver and Neil Willis operated the drone; one piloted the craft while the other operated the 4K camera mounted on a gimbal.

The drone proved its stability in the gusty wind and, with the help of GPS, was able to return home automatically and land almost exactly where it took off. Cleaver flew the drone out to its 500-metre limit and then back directly towards the Centre members at a speed approaching 90kph. He also performed a pirouette with the drone, completing a circuit of the field while spinning on its axis. An unmanned airborne

command-and-control vehicle, one of a pair designed and custom-built for the University of Southampton by Broadcast Networks, was brought to the display by the company’s Ian Davis, Phil Keeling and Tom Haye. The vehicle provides command-and-control facilities for a range of international airborne research missions, including pollution monitoring, weather prediction and civil aviation. Julian Knight and Geoff Love

The September issue of Television, the magazine from the Royal Television Society 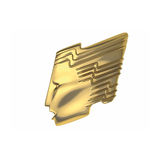