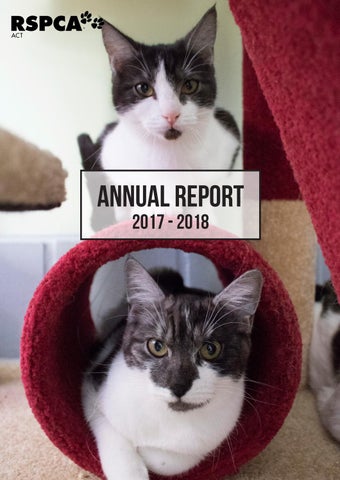 â&amp;#x20AC;&amp;#x153;The greatness of a nation and its moral progress can be judged by the way its animals are treated.â&amp;#x20AC;? - Mahatma Gandhi

Letter from the president

I am pleased to report on the activities of RSPCA ACT for the 2017-2018 Financial Year. It has been a hectic period for the Society and the Board and I have been exceptionally pleased with what the organisation has accomplished during this time. Financially, 2017/18 proved to be a great year with the organisation achieving a net surplus of $819,886. We are incredibly grateful to have received $1,297,470 of donations and bequests totalling $1,322,505. I am always amazed by the generosity of our donors, especially those who show their trust in us by leaving a generous bequest as part of their estate. We continue to consider how we can demonstrate the best stewardship of these funds through investing in future projects that secure our future. We welcomed a number of new Directors throughout the Financial Year. At the Annual General Meeting in November 2017, Bernie Towler and Robert McMahon were elected to the RSPCA ACT Board, and during the year we were pleased to welcome Victoria Press, Chris Collins, Michelle Bennetts and Katy Gallagher as appointed Directors.

These fantastic new additions to the RSPCA ACT Board takes us up to our full quota of Directors for the first time in several years. The wideranging experience of our Directors means that we are now well positioned to consider the various challenges we are likely to meet over the next few years. Key to our future will be formalising the strategy for our facilities and to prioritise the projects that will best allow us to meet our mission. The Board has established a Facilities Sub-Committee to focus on options for future investment and to work through the various building and development approvals that will be required. We have been fortunate to have had a number of providers offer their services, either free of charge or heavily discounted, while we are in this exploratory stage. This has allowed us to benefit from their professional expertise while we consider the look and layout of any future facilities.

As I flagged last year, the shortage of veterinarians in Australia continues to create challenges for us locally. Due to current vet shortages and our priority on caring for the animals in our care, weâ&amp;#x20AC;&amp;#x2122;ve had to limit the amount of services we provide to the public. Addressing this key staffing shortfall remains one of our key objectives and will have a significant impact on our ability to generate additional revenue to continue to fund our operations. The end of the financial year saw us bid farewell to our Chief Executive Officer, Tammy Ven Dange. Tammy has been our CEO since the start of 2014 and has been key in helping us turn around our financial performance and delivering a number of strong surpluses over the past few years. Additionally, she was instrumental in leading opposition to greyhound racing in the ACT and provided significant advice and information to the ACT Government as they considered the future of the industry.

It was partly due to Tammyâ&amp;#x20AC;&amp;#x2122;s leadership on this matter that the ACT has become the first jurisdiction to ban the racing and trailling of greyhounds. This is a significant animal welfare outcome and one of which we can all be justifiably proud. On behalf of the Board, staff and all our members and volunteers, I thank Tammy for all her efforts over the past four years and wish her the best of luck for the future.

Letter from the ceo

Three years ago, RSPCA ACT embarked on a strategic plan with three major animal welfare goals. They were: • Decrease the number of incoming animals; • Keep them healthy; and • Send them to forever homes faster. If we achieved these goals (with multiple actions underneath each), we believed that we would not only see a reduction in the number of animals that needed us in the first place, but also a rehoming rate of 90% or more for the first time across all species. To elaborate on how difficult this is to achieve, last year we barely missed the 90% rate because we unfortunately had a lot of fish die that had been brought in by our inspectors. Yes, the life of a fish counts as much as a life as a dog in our books! In line with our first goal, in 2017-18, we saw a 30.2% decrease across all animals. Felines showed the most significant change for nonInspector seized species with a drop of 15.7% for cats and 24.8% of kittens. Some of you may be aware that we had made a deliberate investment into prevention programs a few years ago. Specifically for cats, we started a three-year, free cat desexing program that we named, “Frisky Tom.” After two years of decreases, and this sudden dramatic decline across all felines this year, we feel confident in saying that our Frisky Tom program has been successful.

Furthermore, we also saw a significant drop in the number of Inspector seized animals, especially for poultry where we haven’t seen the large hoarding cases as we have seen in previous years. Incoming dogs via the Inspectors has also decreased as we have deliberately reviewed our protocols, the legislation and previous animal outcomes to give more owners a chance to rectify issues before a seizure is made. Seized animals, particularly dogs, may stay with us for years and still can be hard to rehome afterwards due to behavioural reasons. If we can achieve a better outcome for that animal without putting them through that process, then it’s a win for that dog and we have more space for others. All of these changes have resulted in a reduction of 1,431 incoming domestic animals this year alone. If we look back at the last three years since we started this strategic plan, the reduction of incoming animals has been dramatic. For domestic animals, we have seen a 72.4% reduction, and for wildlife there has been even more significant reduction of 39.6% This was due to a partnership with ACT Wildlife to provide more specialised care for our natives.

This significant decrease in incoming animals has allowed us to provide more specialised and focused care on each animal that enters the Shelter, especially those with higher needs, hence keeping them healthier which has reduced the number of animals required to be euthanased. Yet, the sudden decrease in animals has not reduced our corresponding costs. Furthermore, the impact to adoption revenue and corresponding retail has been hard. We knew that this would be a risk when we began the Frisky Tom campaign, but a sudden $100,000 difference in revenue due to the reduction in felines alone this year has surprised us. In fact, with our Public vet clinic still closed to the public due to the national shortage of vets, we would have had a very negative financial year had it not been for one of our best years for bequests in decades. In an ideal world, we would have set aside all of those bequests for a new building in the future. While we have put some of these funds into our reserves, we are still a long way off from making significant changes to our facilities as we are currently dependent on bequests to fund our payroll. As I warned last financial year, operational revenue is still very tight despite four years of surpluses. I do think the organisation will need some significant structural changes for it to remain financially sustainable into the future, and to eventually replace some of our “vintage” facilities that have been at the Shelter since from the beginning of our 63-year history. The good thing now is that we have stabilised the financial situation enough to give us time to plan for the future rather than reacting to it. Furthermore, this year we did put together a facilities master plan in case the funds are ever available. I can’t forget to mention a few other achievements this financial year, especially in the advocacy space. In April, the ACT became the first State or Territory to both pass and implement legislation to ban greyhound racing. RSPCA ACT did a huge amount of work with the ACT Government to get here and now we can only hope that other places will eventually follow the lead.

Legislation has been passed to allow for that, and the Greens have gone one step further to try to get pets on buses too. We hope to see a trial once the first line of the tram is fully operational and running smoothly. Finally, our expanded educational program has become a reality this year. Our school holiday program has expanded to include more classes and age groups. Our first children’s book, “The Misadventures of Chris the Sheep” was launched in September 2017 with the potential to be picked up by a publisher. I cannot wrap up my final annual report as CEO of RSPCA ACT without recognising the many, many people that have made this successful year possible. Our staff and volunteers are certainly the most passionate people I have ever met. They remain the primary reason that we have seen such impact through our strategic plan over the last few years. Nevertheless, none of this would have been possible without the financial support of our sponsors, donors, event attendees and advocates that continue to support this work. Without you, we couldn’t pay for those simple things like electricity to heat the kennels in the winter and to cool the cattery in the summer. Thank you for your support of RSPCA ACT all these years. I wish the new CEO, Michelle Robertson, the best of luck. I know with the outstanding team that I’m leaving behind and supporters like you, she’ll be able to successfully lead the next chapter of RSPCA ACT’s book of animal welfare achievements.

This year, we have also made some progress with pets on public transport. Specifically, we have been trying to convince the ACT Government to make provisions for allowing pets at certain times on the new tram system.

91.13% HOMING RATE ACROSS ALL SPECIES

GREYHOUND RACING BAN IN THE ACT 9