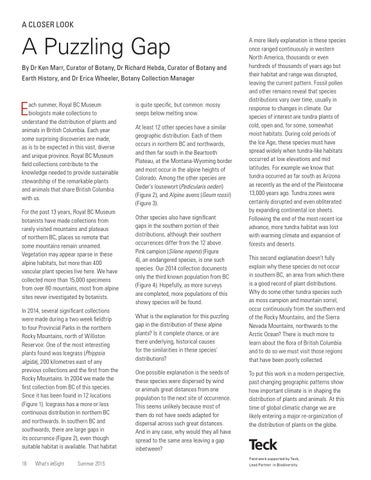 ach summer, Royal BC Museum biologists make collections to understand the distribution of plants and animals in British Columbia. Each year some surprising discoveries are made, as is to be expected in this vast, diverse and unique province. Royal BC Museum field collections contribute to the knowledge needed to provide sustainable stewardship of the remarkable plants and animals that share British Columbia with us. For the past 13 years, Royal BC Museum botanists have made collections from rarely visited mountains and plateaus of northern BC, places so remote that some mountains remain unnamed. Vegetation may appear sparse in these alpine habitats, but more than 400 vascular plant species live here. We have collected more than 15,000 specimens from over 80 mountains, most from alpine sites never investigated by botanists.

In 2014, several significant collections were made during a two week fieldtrip to four Provincial Parks in the northern Rocky Mountains, north of Williston Reservoir. One of the most interesting plants found was Icegrass (Phippsia algida), 200 kilometres east of any previous collections and the first from the Rocky Mountains. In 2004 we made the first collection from BC of this species. Since it has been found in 12 locations (Figure 1). Icegrass has a more or less continuous distribution in northern BC and northwards. In southern BC and southwards, there are large gaps in its occurrence (Figure 2), even though suitable habitat is available. That habitat 16

is quite specific, but common: mossy seeps below melting snow. At least 12 other species have a similar geographic distribution. Each of them occurs in northern BC and northwards, and then far south in the Beartooth Plateau, at the Montana-Wyoming border and most occur in the alpine heights of Colorado. Among the other species are Oeder’s lousewort (Pedicularis oederi) (Figure 2), and Alpine avens (Geum rossii) (Figure 3). Other species also have significant gaps in the southern portion of their distributions, although their southern occurrences differ from the 12 above. Pink campion (Silene repens) (Figure 4), an endangered species, is one such species. Our 2014 collection documents only the third known population from BC (Figure 4). Hopefully, as more surveys are completed, more populations of this showy species will be found. What is the explanation for this puzzling gap in the distribution of these alpine plants? Is it complete chance, or are there underlying, historical causes for the similarities in these species’ distributions? One possible explanation is the seeds of these species were dispersed by wind or animals great distances from one population to the next site of occurrence. This seems unlikely because most of them do not have seeds adapted for dispersal across such great distances. And in any case, why would they all have spread to the same area leaving a gap inbetween?

A more likely explanation is these species once ranged continuously in western North America, thousands or even hundreds of thousands of years ago but their habitat and range was disrupted, leaving the current pattern. Fossil pollen and other remains reveal that species distributions vary over time, usually in response to changes in climate. Our species of interest are tundra plants of cold, open and, for some, somewhat moist habitats. During cold periods of the Ice Age, these species must have spread widely when tundra-like habitats occurred at low elevations and mid latitudes. For example we know that tundra occurred as far south as Arizona as recently as the end of the Pleistocene 13,000 years ago. Tundra zones were certainly disrupted and even obliterated by expanding continental ice sheets. Following the end of the most recent ice advance, more tundra habitat was lost with warming climate and expansion of forests and deserts. This second explanation doesn’t fully explain why these species do not occur in southern BC, an area from which there is a good record of plant distributions. Why do some other tundra species such as moss campion and mountain sorrel, occur continuously from the southern end of the Rocky Mountains, and the Sierra Nevada Mountains, northwards to the Arctic Ocean? There is much more to learn about the flora of British Columbia and to do so we must visit those regions that have been poorly collected. To put this work in a modern perspective, past changing geographic patterns show how important climate is in shaping the distribution of plants and animals. At this time of global climatic change we are likely entering a major re-organization of the distribution of plants on the globe. 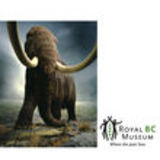