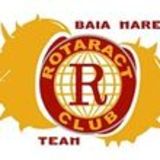 Rotaract has evolved quickly in its short but dynamic history. In the early 1960s, Rotary clubs around the world began to sponsor university youth groups as community service projects. The 1967-68 RI president, Luther H. Hodges, and

the RI Board of Directors considered this club activity to have international relevance, and Rotaract was approved in 1968 as an official program for Rotary clubs. The first club chartered was the Rotaract Club of North Charlotte, North

Several decades later, the Rotaract program has grown into a strong, international network of 7,300 clubs in more than 150 countries and geographical areas. Rotaract’s 145,000 members are young men and women (ages 18 to 30) who serve the needs of their communities, widen their personal and professional contacts, and increase their understanding of the world.