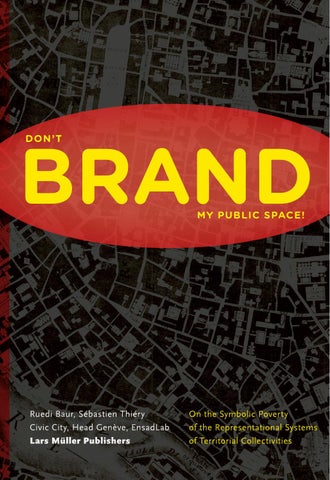 Logotomized City (or Patrick Le Lay’s Victory) 1 Jean-Pierre Grunfeld If the signs vex thee, oh how the things signified shall vex thee more! R ABELAIS, The Third Book of the Heroic Deeds and Sayings of the Good Pantagruel, 1546 “On the day when I know all the emblems,” he asked Marco, “shall I be able to possess my empire, at last?” And the Venetian answered: “Sire, do not believe it. On that day you will be an emblem among emblems.” ITALO CALVINO, Invisible Cities, trans. William Weaver, 1972 Foreword: The Term “City” Now that they are spread all over the world, a variety of radically different urban realities are called by the same name. Let us agree upon what we mean by “city.” During the Renaissance, a new way of accommodating groups of humans developed in the hills of Tuscany and the plains of Flanders. Citizens reinvented themselves as city dwellers. They created stone forms that were “masterful, correct, and magnificent,” 2 solid and void elements whose combination organized the choice between “public” and “private” spheres. They built upon the legacy of ancient Greek or Roman cities. They enriched such a legacy with new techniques and political visions. Everywhere in the well-off areas of the Northern Hemisphere these arrangements contributed to the advent of democracy and then to its consolidation. They did nothing to reduce political conf licts or social tensions. At certain points in history, they welcomed these conf licts in the form of barricades or the storming of the Bastille, celebrations of the people or triumphs of the aediles, the town officials. Monuments regularly accentuated these moments. 3 Kings lived in the city outskirts: Sans-Souci, Windsor, or Versailles. The destiny of these cities is tied to a circumscribed geographical area and a short historical time span. Born in fifteenth-century Europe, confined until recently to the Northern Hemisphere, this

There Are Cracks in the Walls… Annick Lantenois Action worms its way into the cracks of reality in order to transform it. 1 This text is based on three preparatory visual essays proposed by Irena Bockaj, 2 Maria Roszkowska, and Ruedi Baur as preliminary topics for ref lection. Their adaptation to the format of the present work and the development of the ideas of their authors may skew one’s reading of the following text without, however, changing its underlying concept in any way.

These essays are meant to take stock and record the “symbolic poverty of the identification systems of European territories.” Their pages are terribly loud. And that noise is paradoxically a discourse. Or more exactly, two discourses, one superimposed on the other. There is the discourse that underlies the production of these signs, and a second one that is bound up with how that discourse is laid out on the page. The former is constituted, not by each isolated sign, but by their daily interconnection—in which we are all evolving, whether consciously or unconsciously, with vigilance or indifference. This first discourse also tells us that, no matter their graphic “quality,” signs are never mute. The present essays constitute the second discourse. There are three critical essays on the identity of the state institutions designated by the term “territories,” written by three authors—Irena Bockaj, Maria Roszkowska, and Ruedi Baur. The final result of their coming together is a discourse that seems to translate an observer’s perspective, an objective perspective from above. And yet, these essays do more than merely observe. They suggest that, from the very beginning, there was the certainty of finding something that, all things considered, was not sought but rather experienced as a given.

Vladimir Jankélévitch and Béatrice Berlowitz, Quelque part dans l’inachevé, Paris, 1978, p. 143. My thanks to Marie Bruneau and Bertrand Genier for temporarily suspending their meditation before the ocean to carefully re-examine and discuss the present text. Pages 240 to 241: excerpts from “Don’t Insult My Neighborhood!,” a comparative study of the signs of contemporary nationalism in ex-Yugoslavia, Switzerland, and Belgium by Irena Bockaj. This research was made known to the authors invited to contribute to the book.

“Branding,” Faith, and Experience Pierre-Damien Huyghe Since the early 1990s the existence of non-lieux, non-places, more or less everywhere is readily admitted. The expression obviously owes a great deal to Marc Augé’s book of the same name, 1 which was able to draw attention to a number of places that are poorly socialized, even non-socializable, or in any case unsuitable for developing the links of traditional sociability. Augé saw in the frequency of nonplaces the major element—the essential mode of appearance—of a new era, namely, “supermodernity.” The negative character of the term he came up with remains a problem, however. What we must come to understand is that in fact—starting with its name—it is a matter of judgment that at heart rejects it. I shall be arguing two points then in this regard. On the one hand, I would like to establish that this so-called supermodernity is bound up with a sudden, more global growth in terms of landscape. This sharp growth not only affects places that are devoid of humans and that we would like to pass through without having to pay any mind, but also, because the view is being peopled, as it were (an accumulation of more or less aggressive signs and logos, for example), this growth tends to determine the complete field of our relationship to objects. Is this entire trend inevitable? On the other hand, I want to offer a critique of the negative aspect of Augé’s concept in order to raise that kind of question. Indeed, to know that the urban strata currently developing are doing so by implicating places and practices without any positive aspects hardly helps one to live in those strata. Rather it makes one want to take refuge in spaces protected from the incriminated movement, if any such spaces remain. This is precisely the problem, the whole problem of this search for a refuge: Is it still possible to really separate—I repeat, “really,” not “imaginarily,” not “nostalgically”—separate places and non-places? How did the latter, if they are radically negative, manage to come about? And how can one—not justify, that is not my intention—at least understand their growth?

economy, and tourism impose, we must start upon a journey to discover the wealth and plurality of our cities and territories, crisscross our great metropolises to meet their inhabitants, rediscovering otherness. Experience teaches us that a developing, attractive, and pleasant territory is first and foremost a territory in which people can meet. A city is sized up through the senses more than through any census. 53 This is a new way of adopting a Neo-Situationist position in the wake of Guy Debord: “We did not seek the formula for changing the world in books, but by wandering.” More than images, slogans, and brands, we need a dialogical democracy, new imageries and common narratives, and a new contract of trust at every level of our lives and cities. Miguel Torga’s the universal is the local without walls 54 sums up what our territories could become, offering a clear new direction for tomorrow.

Don’t Brand My Public Space! On the Symbolic Poverty of the Representational Systems of Territorial Collectivities Edited by Ruedi Baur and Sébastien Thiéry Civic City, Head Genève, EnsadLab A project of the research series by Design2context Design: Maria Roszkowska Editorial office: Maria Roszkowska Translations: Daniela Almansi, John O’Toole Copyediting: Jonathan Fox Lithography: Civic City Paper: Munken Lynx, 130 g/m2 Printing and binding: Kösel, Altusried-Krugzell, Germany © 2013 Lars Müller Publishers, Design2context and the authors The present volume comprises the visual research established in an academic context. It couldn’t be published if customary rules for the use of images were respected. For scientific reasons and in the name of freedom of expression, the authors of this book have decided to invoke the right to make research results available to the public and ask for the approval of image authors who are neither quoted nor renumerated. Should anybody feel insufficiently acknowledged by this interpretation, they should please contact the publisher. No part of this book may be used or reproduced in any form or manner whatsoever without prior written permission, except in the case of brief quotations embodied in critical articles and reviews. Lars Müller Publishers Zürich, Switzerland www.lars-mueller-publishers.com ISBN 978-3-03778-348-1 French edition also available: Face au Brand Territorial Sur la misère symbolique des systèmes de représentation des collectivités territoriales ISBN 978-3-03778-354-2 Printed in Germany

On the Symbolic Poverty of the Representational Systems of Territorial Collectivities